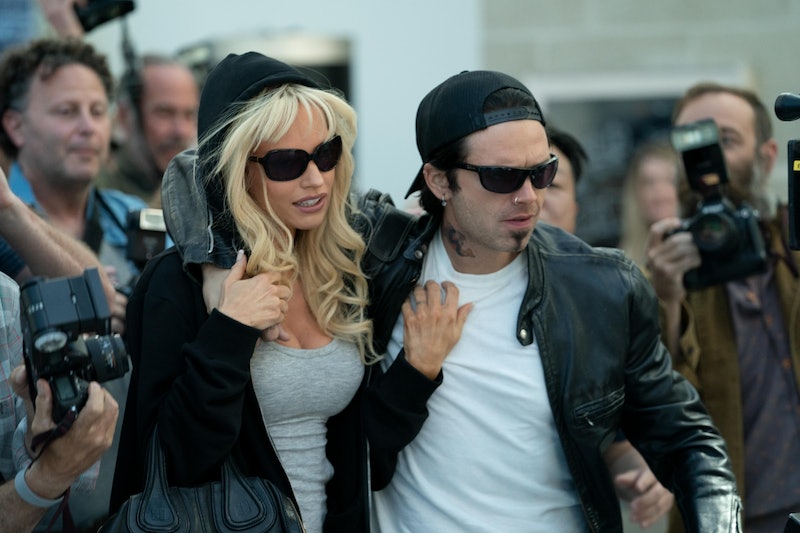 Set in the mid ‘90s, Hulu’s Pam & Tommy dramatizes the true story of Pamela Anderson (Lily James) and Tommy Lee’s (Sebastian Stan) whirlwind relationship. It’s centered around the couple’s stolen honeymoon tape, which included eight minutes of them having sex. The video was taken from their home by a disgruntled contractor (played by Seth Rogen) and later went viral online, launching a cultural conversation about celebrity privacy, consent, and the dangers of the internet. “People got the internet so they could see the tape,” journalist Amanda Chicago Lewis told The Washington Post. “When it was happening to [Anderson and Lee], everyone laughed at them and they were not taken seriously. But I think that there’s something haunting about the way Pam and Tommy were treated.”

From the beginning, Pam & Tommy was planned as a miniseries. The idea stemmed from a 2014 Rolling Stone article that set the record straight about how the tape was stolen; later, producers snapped up the rights to the story. "It's just one of those stories that you can't believe hasn't already been made into a movie or a TV show," showrunner Rob Siegel told Entertainment Weekly. "The article was [from] 2014, and it's kind of amazing that it was still out there and it wasn't snatched up that first day came out. To me, it screams limited series."

With that in mind, it’s unlikely that the show will return for a second season, particularly because neither Anderson or Lee were involved in the production. To fill in the blanks about their relationship and the private fallout of the tape, the show’s team used details from Lee’s memoir, while stars Stan and James studied old interviews to capture the two’s affectations. As for their incredible transformations into Anderson and Lee, James spent a minimum of three hours in the makeup and hair chair each day. Stan reapplied replicas of Lee’s tattoos every few days, and used prosthetics for Lee’s nipple rings.

“My sole intention was to take care of the story and to play Pamela authentically,” James told Porter magazine, noting that she reached out to Anderson personally about the project but never heard back. Per Variety, in a now-deleted Instagram post, Anderson’s longtime friend Courtney Love criticized the show for rehashing old wounds and causing “complex trauma” for Anderson all over again. Siegel told Variety that Anderson ultimately “chose not to engage” with them, and that they “respected her desire not to be involved.” Lee, meanwhile, gave Stan his blessing to move ahead after Stan contacted him to explain that the series was really about privacy issues, but declined to be involved further.

Despite not ever hearing from Anderson, Siegel told EW that she’s the indisputable star of the project. “I think if you had to name one person with whom the show's sympathies lie, it's Pam," he said. "We're very much taking the side — when you tell people about the show and about the tape, when I bring up the subject of the tape and that I was doing a show about it, I was shocked by how many people assumed that [Anderson and Lee] were in on it, which is something I'm happy that we were able to set the record straight about. We very clearly, unambiguously present them as the victims of a crime, which they were."

Director Craig Gillespie added that they hope the eight episodes will stand as a testament to Anderson’s strength. “This felt like such an opportunity to be able to look at the story through today's lens and the outrageousness and just the atrocities that happened,” he said. “Hopefully, it [will] change people's point of view on that.”

More like this
Kim K Really Wants You To Know She's Having Sex
By Sophia Benoit
How Director Quinn Shephard Turned Dylan O’Brien Into A “Viral Weed Blogger”
By Samantha Leach
The Ending Of 'Prey,' Explained
By Morgan Leigh Davies
Does 'Locke & Key’s Ending Mean There Could Be A Season 4?
By Sophia Moore
Get Even More From Bustle — Sign Up For The Newsletter