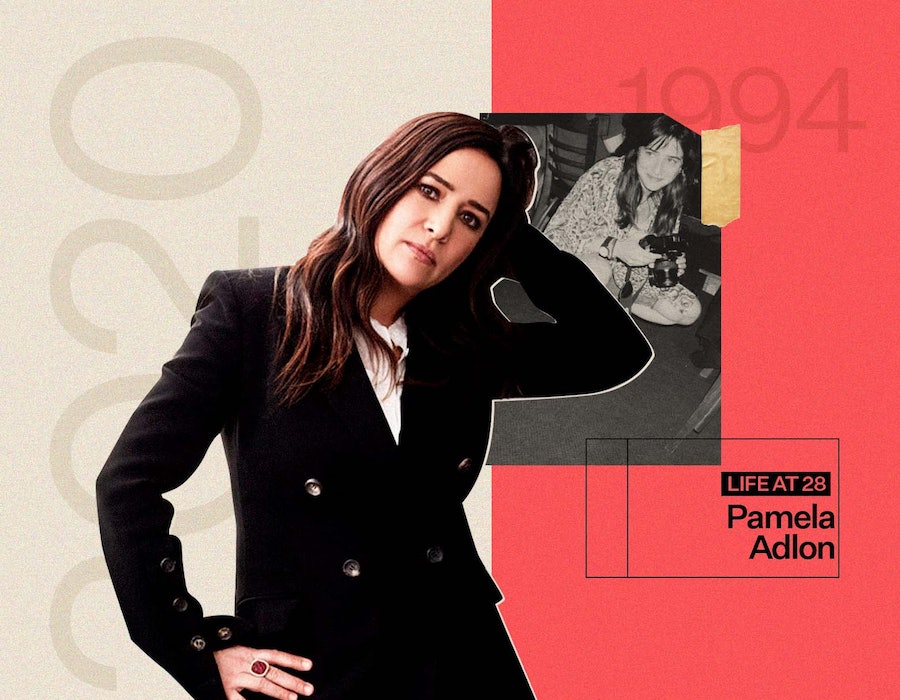 "Are you ready? I got a doozy for you," Pamela Adlon warns me. If you're expecting inspirational anecdotes about a 28-year-old Adlon thriving on the precipice of stardom, prepare to be disappointed. Adlon's 28th year was a tumultuous one personally, professionally, and even literally, as she recalls being shaken by the 1994 Northridge earthquake that rocked Los Angeles, where she was living at the time.

After a career as a child actor in films like Grease 2 and Say Anything and a smattering of voiceover work, Adlon struggled in her late twenties to land roles and stay financially afloat. Also, "My dad dropped dead," she says. "He wasn't sick, he literally just dropped dead." This personal tragedy is burned into her memory alongside major pop-culture moments from that year — Kurt Cobain's death, O.J. Simpson's infamous car chase, Bill Clinton blowing a saxophone. Professionally, Adlon describes her 28-year-old self as "floundering." It would be a few more years before she got married, had children, and landed her first major (and eventually Emmy-winning) voiceover role as Bobby Hill on King of the Hill; a memorable run on Californication and many more voiceover roles followed in the aughts.

"I didn't want to be famous. I just wanted to work."

But Adlon's splashiest, most acclaimed role is one that she created for herself two decades after she turned 28. As the creator, writer, director, and star of FX's lightly autobiographical Better Things, which premiered in 2016 and begins its fourth season on March 5, Adlon has firmly solidified herself as a multi-hyphenate creator and distinct voice in the increasingly concentrated TV landscape. The show is a raw, tender, and funny look at single motherhood and show business — one that's enriched by Adlon's years of experience working to live, instead of living to work. Below, Adlon reflects on where she was in life and work at the age of 28.

Take me back to when you were 28. How were you feeling about your life and your career?

I was struggling. I was living on Spaulding off Melrose and Fairfax [in LA] and I was having a hard time paying my rent. I was going in and out of unemployment. I was living off of voiceover [work] — I pretty much couldn't get any on-camera work. I didn't start King of the Hill, which was like my first golden egg, until [a few years after].

What were your goals when you were 28? Have they changed since?

I didn't have goals. I didn't want to be famous. I just wanted to work. I'd never imagined a world in which I ever had kids, let alone got married. None of that. I was just kind of going through the motions of my life and enjoying my friendships. Looking back, I wish I had set goals for myself. I wish that I had reached for the pie in the sky more.

Do you remember what a typical Friday night looked like for you when you were 28?

Oh my god. I liked cooking back then. We would go out to the desert quite a bit. I was listening to live music — we would go to Cafe Largo and The Mint. I lived in West Hollywood, I liked going to gay sh*t, I loved drag. I remember sitting on the steps of my apartment building with my friend Josh and saying, "There's no drag scene in LA, this is so boring!" And whenever there was drag, we would just jump at the chance [to see it]. That was a big part of that part of my story.

My apartment was expensive. I think it was 836 bucks for a two-bedroom duplex off Fairfax and Melrose. And it was killing me. I remember there was carpeting in the apartment that really grossed me out, so my friend and I tore all the carpeting out and we put it on the curb, and then we got a sander to do the floor. By the time we were done with the floor, the carpet and the lining was gone. Somebody just pulled over, picked it up, and took it.

I never had an "I made it" moment. I mean, I think it really didn't occur to me that I'm going to be okay until I turned 50.

"Every day I'm pinching myself, because I didn't really have a lot of confidence at 28."

What was it when you turned 50 that made you feel that way?

It's the fact that I'm able to work in the capacity that I am right now [writing, directing, and starring in Better Things]. And that I have all of these new jobs that I never really imagined I could be doing at the age of 28, certainly. I had dabbled in everything like writing and directing and acting, but I never thought that they could merge into one thing. So that's a pretty extraordinary realization for me.

I think she would be as in disbelief as I am myself today. Every day I'm pinching myself, because I didn't really have a lot of confidence at 28. I have way more confidence now in who I am and what I'm doing. I don't feel bad about stuff anymore.

What do you think changed for you? Was it time, experience, or something else?

You know, time and experience, and then being able to look at things in a way that they're not so dire and critical. Because a lot of people look at life that way. And you sit there and go, "Well, why am I taking this so f*cking personally? Why am I taking all of this so seriously? Why does this suck so bad?" Well, because you're taking it so personally and seriously. And you change the way you look at things in your life. When your mom's talking to you about going into, like, the hardware store or calling Verizon for the ninth time and telling you the same story, instead of you wanting to drive your car into a brick wall, just take a beat and a breath — stop, look at your mom, and realize, "Oh, my god, this is hilarious."

More like this
At 28, Rosie Perez Risked Her Career To Stop Playing Stereotypes
By Gabrielle Bondi
At 28, Debra Jo Rupp Was Living A Much Different '70s Show
By Grace Wehniainen
Twitter Is Identifying With Sally Field & Jane Fonda’s Friendship In New Viral Video
By Jake Viswanath
Linda Ronstadt’s “Long Long Time” Plays A Pivotal Role In The Last Of Us
By Brad Witter
Get Even More From Bustle — Sign Up For The Newsletter
From hair trends to relationship advice, our daily newsletter has everything you need to sound like a person who’s on TikTok, even if you aren’t.