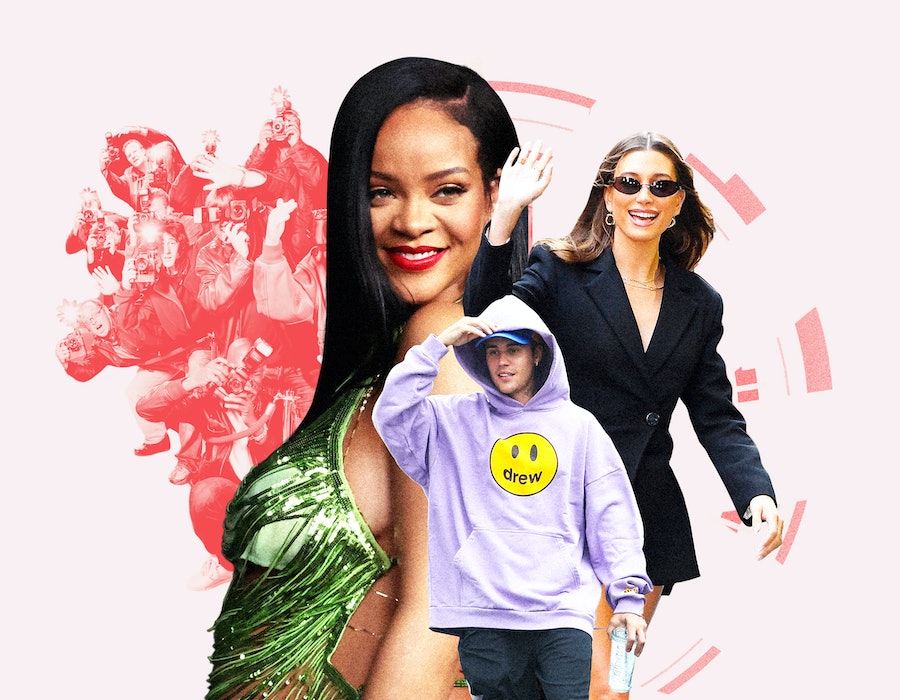 The date is Jan. 31, 2022. It’s a rather quiet day on social media until Rihanna decides to drop a bombshell: paparazzi photos revealing her pregnant stomach, dripped out in vintage Chanel. Naturally, the internet lost its mind.

The pictures, which cost a whopping $1,500 to license, appeared to be candids — at least upon first glance. Rihanna and her boyfriend A$AP Rocky look fairly unposed, as if they were just spied on a stroll — and in theory, photographer Miles Diggs could have caught them off-guard on a snowy Manhattan corner. But then, you realize: Why would a billionaire singer-entrepreneur be outside in the dead of winter, belly exposed to the world, if not for the camera?

Staged paparazzi photos like these are far from a new phenomenon, but according to industry insiders, they’ve become increasingly popular in recent years. Below, three experts discuss how they’re set up, and how to spot them in a sea of photos that look too good to be true.

What Makes A Paparazzi Photo Staged?

When it comes to staged celebrity moments, photos like Rihanna’s — and other shots by Diggs, who’s known for his set-up work — are the tip of the iceberg. Many paparazzi operate in the gray area between candid and staged, photographing stars who want to be seen out and about, even if they don’t act like it. “When people are going to an event, [the paparazzi] is set up,” a veteran Los Angeles street-style photographer — we’ll call him John — tells Bustle. “The people putting it on are hoping you’ll be there to shoot, even though they may take pains to keep you out with security.” There are also the loosely-coordinated “candids,” like a picture of Kendall Jenner at the gas station. “How is the photographer at the gas station? They’re following her the whole time … Those shots don’t exist unless they’re sort of planned,” John says. “You see those shots in The Daily Mail every day.” He also points to Hailey Bieber, who has a habit of attending the same pilates class at the same time every week, much to the delight of paparazzi. “To me, that’s a set-up photograph,” he says.

Other staged pictures don’t require such meticulous planning, but emerge out of necessity. “With Justin Bieber — I asked him a specific question [for a video], but he was having a bad day,” says Cesar Peña, a paparazzi photographer, videographer, and founder of 247PapsTV. “[Pastor Carl Lentz] came out and said, ‘Cesar, you know he knows you, ask that same exact question tomorrow. Same time, come right here and he’ll be ready for you.’ The next day, I came right to the gym, stood right there, and a car came. Justin came out, big smile on his face, and answered the questions.”

And then there are the straight-up posed shots. “A celebrity’s stylist will sometimes say, ‘Hey, will you get this girl walking down the street? I just styled her and she looks great,’” John says.

Why Do Celebs Seek Out Staged Photos?

Tyler Williams, CEO of beauty PR firm Nouveau Communications, says staged photographs are often designed as covert ads. For example, he once worked for a hair care brand that staged paparazzi photos of its ambassador, Katie Holmes. “One of the tactics we would use occasionally — beyond her being our face for advertising, videos, and media interviews — was staging a photo of her shopping at Sephora with our newest product,” Williams says.

That situation was a little easier, since Holmes was already on the brand’s payroll. For one-off staged shots, the rate is up for negotiation; Williams remembers paying a star $50,000 for a couple shots — not cheap, but more affordable than a sponsored Instagram post, which can run a brand well over $1 million in some cases. It’s a good deal for the talent, too: Tens of thousands of dollars for a couple hours’ work, between getting ready and not-quite-posing for the shot. “The talent gets a fee, we agree to a location and what the photos will look like — if they’re walking down the street or pulling a product out of their bag at lunch.” Naturally, the photographer gets paid, too — not least because they’re also responsible for distribution. “A lot of these photographers have really great relationships with the publications, so they can say, ‘We’ll take these photos for you and guarantee placement in XYZ magazines,’ or ‘We’ll guarantee at least a certain number of impressions based on the publications we work with,’” Williams says.

There are other reasons to stage a faux-spontaneous photo, too: Celebs will use them to soft-launch a new boyfriend, or even just to stay in the public’s consciousness. It’s almost an extension of a star’s social media presence — an off-label method of dictating what the public can (and cannot) see. Kim Kardashian, for instance, has nearly as much control over her paparazzi shots as she does over her Instagram feed. “She wants things airbrushed; there are specific photographers who work with her that know how to manipulate the photos,” Peña says. “Candid shots of her are very rare.”

How Can You Tell If A Photo Is Staged?

Even for those in the know, it can be hard to know what’s real and what’s fake. Like those photos of Harry Styles and Olivia Wilde? While they may look posed, Peña swears they’re 100% candid. “I know the photographers who shoot them. They’re big-time photographers who shoot with 400-, 500-millimeter lenses [from far away]. Harry and Olivia don’t see them at all,” he says. “If Harry had his way, he would never want anyone to take candid shots of them.”

Still, there are some ways to discern the real from the manufactured. Peña largely relies on the photo credit — if it’s a photographer like Diggs, the lensman behind Rihanna’s aforementioned pregnancy shots, the photo is likely staged. And with every aspect of celebrity culture, it’s helpful to read between the lines. “A lot of the photos will run with really tiny captions,” says Williams. “If those captions are branded in any capacity, like ‘Hilary Duff gets ice cream at whatever ice cream shop,’” you’ve got yourself a staged photo.

Williams also recommends looking at the image itself. “One of the biggest tells [of a staged photo] is if the celebrity looks fantastic,” Williams says. By “fantastic,” he doesn’t mean innately beautiful — he’s referring to outfits that fit almost too well, suspiciously symmetrical smokey eyes, and expertly-coiffed beach waves that exist almost nowhere in nature. They’re also often curiously well-framed. “When there’s a foot or two [of space] around the person, you get the full-length, the full look of the clothes? That’s a staged photo,” John notes. It’s also a tell “if she’s walking down the sidewalk, allegedly by her house,” he adds. “People aren’t just walking around their house on the sidewalk in Beverly Hills.”