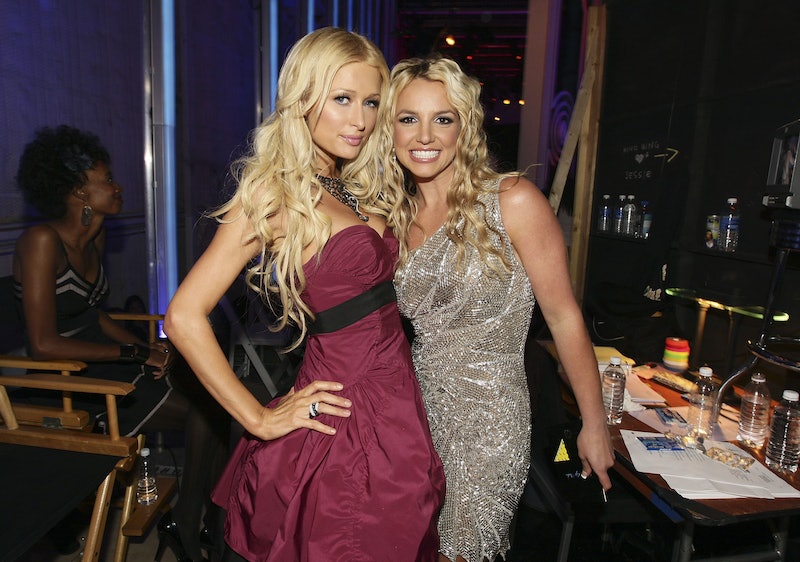 Sixteen years have passed since the infamous “Holy Trinity” photograph was taken. The iconic image of Lindsay Lohan, Britney Spears, and Paris Hilton piling into a car together when they were spotted by paparazzi, broke the Internet before breaking the Internet was even a thing. According to Entertainment Weekly, the trio was leaving a party at the Beverly Hills Hotel together when photographers swarmed their car in 2006. The rest was history — and Hilton just commemorated the moment in 2022. “16 years ago this happened and the ‘Holy Trinity’ was born,” Hilton tweeted, adding on the hashtag #Sliving and tagging Spears and Lohan.

In the photo, which belongs in a museum, the trio looks like they’re getting along, but the backstory behind the moment provides further context. Rumors swirled that Hilton had allegedly hit and thrown a drink at Lohan, and Hilton was keen on escaping any questioning. She and Spears had been out that night, and unexpectedly ran into LiLo before the alleged drink toss.

“That was a night that Britney and I went out, and we were at the Beverly Hills Hotel, at our friend's party, and we decided to leave to go home,” Hilton recalled on her iHeartRadio podcast This Is Paris in 2021, reflecting on the photo’s 15th anniversary. “We were walking to the car and all of us suddenly got swarmed by tons of paparazzi.”

“Just as we got to the car, that’s when Lindsay came up. It was kind of awkward because we were having some drama,” added Hilton, who had told the press to ask the Mean Girls star about the reported incident — and they did.

“Lindsay said, ‘No, Paris would never hit me, I’ve known her since I was 15,’” Paris remembered. “It was basically just, not admitting what she did. It was quite awkward to be asked that question, and it was just weird how that whole thing happened. All of a sudden, I look over, and she’s in my car. We weren’t getting along, but I was polite.” Since the image was taken, Hilton and Lohan are no longer on bad terms. In fact, they’ve texted a couple of times. The heiress was even a guest at Spears’ June 2022 wedding to Sam Asghari.

Now, Twitter is ecstatic to remember exactly how old the Holy Trinity photo is. “What an iconic moment in history. Back when times were simpler and I miss those simpler times. Love you guys,” @ZachNWagner01 said. “Please call Britney and Lilo and recreate this photo! It would be iconic,” @blackownt chimed in. @PerezHilton even wished fans a “Happy Holy Trinity Day.”

Here’s hoping they recreate this moment of history ASAP.

More like this
Ashton Kutcher Wants Danny Masterson “To Be Found Innocent” In Rape Retrial
By Jake Viswanath
The Jonas Brothers' New Album Has A Very Meta Name
By Alyssa Lapid
Cruz Beckham Teased New Music With An Adorable Nod To Mom Victoria Beckham
By Stephanie Topacio Long
Hilary Duff Is “Optimistic” About A 'Lizzie McGuire' Reboot
By Alyssa Lapid
Get Even More From Bustle — Sign Up For The Newsletter
From hair trends to relationship advice, our daily newsletter has everything you need to sound like a person who’s on TikTok, even if you aren’t.