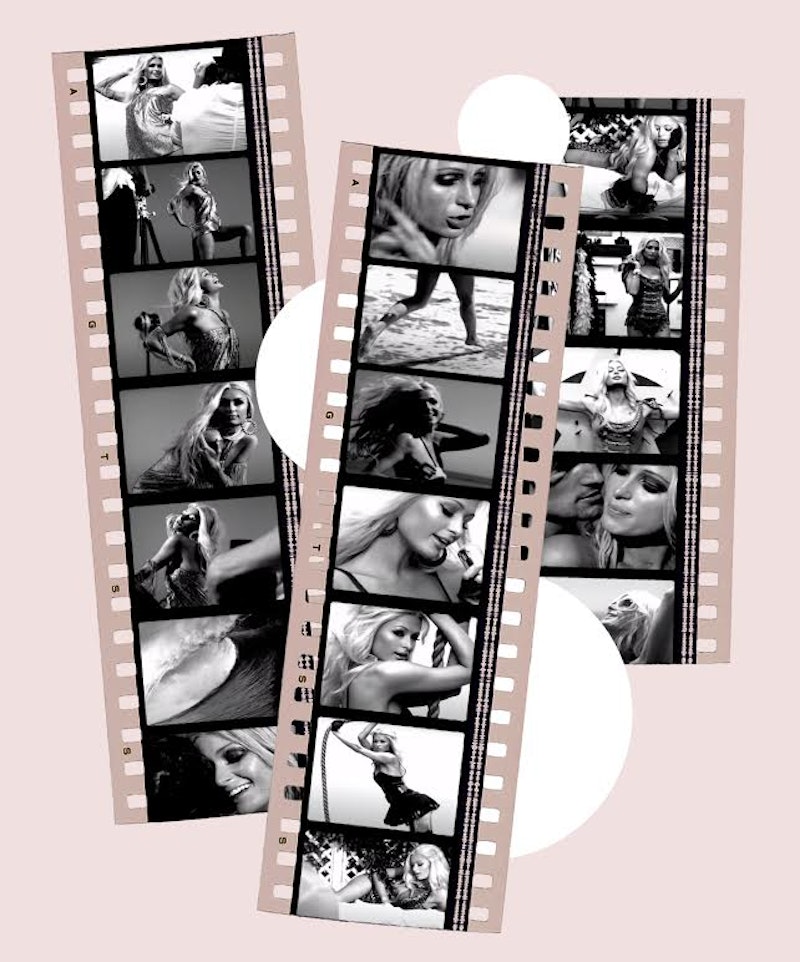 To hear her tell it, nobody’s more in on the joke than Paris Hilton. The heiress first rose to stardom in the early aughts, cementing herself as a baby voiced, velour tracksuit-wearing take on the dumb blonde trope — with her own catchphrase ("That's hot") to boot.

“I invented this character and I knew exactly what I was doing," Hilton tells Bustle of the persona she adopted in the public eye and proudly embodied on her 2003 reality show The Simple Life. "So I was always laughing all the way to the bank." Which is why when she dropped her single “Stars Are Blind” off her debut album Paris in 2006, people were so... surprised. Unlike the music released by reality stars who came in her stead — think Kim Kardashian’s “Jam,” or Heidi Montag’s “Higher” — it wasn’t a forgettable vanity single. “Stars Are Blind” was well produced and felt authentically Hilton. It was also a bonafide bop. “For the music it was never really about the character, it was more about me as an artist. When I do my music, I take it seriously,” she explains.

As a critic for Complex put it, Hilton’s reggae-infused song “was like a tropical escape from her tabloid headline persona.” It was “a flash in the pan, a fluke, but an incredible one.” The production was so perfect, the writing so spot-on, it made you feel like your crush was rubbing suntan lotion on your back.

Written and produced by Fernando Garibay, who went on to work with Lady Gaga on Born This Way, “Stars Are Blind” rose to No. 18 on the Billboard Hot 100 chart in 2006. Nearly 15 years later, the song’s legacy endures, with pop star Kim Petras performing a viral cover earlier this year and Urban Outfitters releasing limited edition LPs of Paris.

“That song is such a huge part of me, my brand, and my life,” Hilton says. “Any time I walk into a club or anywhere, the DJ always puts it on. If I was a song, that would be me.” Below, Hilton reflects on the cult classic track, from its “too sexy” for American audiences music video to the role it plays in her current relationship.

What made you decide to get into music with “Stars Are Blind”? How were you feeling about your life and career at the time of the song’s release?

I always loved music ever since I was around 3 years old. I played the violin, the piano, and I sang my entire life. Then when I was shooting The Simple Life, I got approached by a lot of different record labels and it was always my dream to be a singer. So I went in the studio and did that album and it was so much fun.

At what point in the process did you start working on “Stars Are Blind?” Did you know you had a hit on your hands when you were recording it?

[At first] Warner Bros. wanted me to do a rock album. So I remade “Heart of Glass” by Blondie. I remade this Kim Carnes song, “Bette Davis Eyes,” and it was a lot of pop/rock music. Then I ended up changing the direction of the album completely. I went to Miami and met with [producer] Scott Storch, and then I started redoing the album and doing more pop and hip hop. Then during the middle of the album they sent me “Stars Are Blind,” and I immediately knew that I had a huge hit on my hands.

During the first week of Paris’ release, Banksy replaced 500 copies of the album with an alternative version that included satirical songs like "Why Am I Famous?" and an updated cover that was a photo of you topless. Do you remember how you found out about it? How did you feel at the time when you did?

Banksy is an iconic artist and I thought it was really cool that he would take that time to go and get 500 of my albums and do that to them. I've actually been trying to buy one. [They] keep on going up for auction and I'm trying to wait for another one [to become available] because they're very limited edition. But I thought it was awesome that he did that.

So you weren't offended?

I've always been in on the joke. So anytime anyone would ever [talk] about that character, it didn't bother me because I knew that I was putting it on.

"I invented this character and I knew exactly what I was doing. So I was always laughing all the way to the bank."

By all accounts, the song was a commercial and critical success. How did it feel to be validated in that way, especially given the less positive response to your other projects like The Simple Life?

It makes me feel really proud. Even to this day, especially during the summertime, everyone is like, “Oh my God! That's my summer song.” So many people have come up to me, even Madonna, just saying how they love that song. Lady Gaga and so many people say it's one of their favorite pop songs. It makes me feel so happy when I hear that.

Let’s talk about the music video. In interviews about This Is Paris, you’ve discussed how hard it was for you to cede creative control of the documentary because you’re so used to controlling everything. How much of a hand did you have in the artistic vision for the “Stars Are Blind” video?

With every single music video I've done I'm there making the mood boards, basically just coming up with the whole concept, and I'm involved like 100%. [With this], it was very sexy. I was really inspired by George Michael’s [“A Different Corner”] video — the black and white one — and we just had just a lot of really iconic photos up on the mood board like Madonna pictures.

You later recorded a second version of the video where in the end you end up stealing your lover’s car. Why create an alternative version?

Because they said it was too sexy for America. So we ended up making [the original] the European version. [At first] the whole video before was just basically us on the beach. So we had to kind of tone it down and make a little bit more of a storyline.

How did you feel about that criticism?

I'm used to it. The same thing happened with my Carl's Jr commercial when that came out. It was a Super Bowl commercial and they banned it because they said it was too sexy for TV. So I don't know. I didn't think it was too risqué, either of those, I thought they were really beautifully done.

What’s your favorite cover of “Stars Are Blind?”

Miley Cyrus sent me one that she did, which was so beautiful. It wasn't released, she just texted it to me. [She played it] on the guitar and she was just singing it in her beautiful voice. It made me cry. I was like, “This is so sweet of you to send this.” Then Kim Petras posted one recently that I thought she just did a beautiful job with it.

Between the Kim Petras cover and the original’s presence in the upcoming film Promising Young Woman, there’s a cultural resurgence brewing around the song. What does that mean to you?

I am just so proud of the woman I am and everything I've been through and just happy to finally get the respect that I deserve.

Have you gotten to see an early screening of the film? Bo Burnham serenades Carey Mulligan with the song, it’s iconic.

I met the director [Emerald Fennell] at a party and she came up to me and said, “Thank you so much. I didn't think we would get this song and it's just the perfect song for the movie.” She invited me to the premiere, but then COVID happened so everything got pushed so I haven't seen it yet. But everyone who's seen it has said that it’s the part they remember the most in the movie.

Do you ever include “Stars Are Blind” in your DJ sets?

I always end the whole set with “Stars Are Blind.” I'll get on top of the DJ booth and sing it live for everyone, and everyone in the whole room is just singing all the words and knows it by heart.

No matter where you are in the world?

Do you listen to the song in your personal life?

I listen to it all the time and every morning when I'm getting ready, my boyfriend [Carter Reum] plays the whole album and that’s the first song he plays. So I listen to it every day.

That's our favorite song to make out to, it's just like our love playlist.

So you consider it a good hookup song?

It’s a really good one.