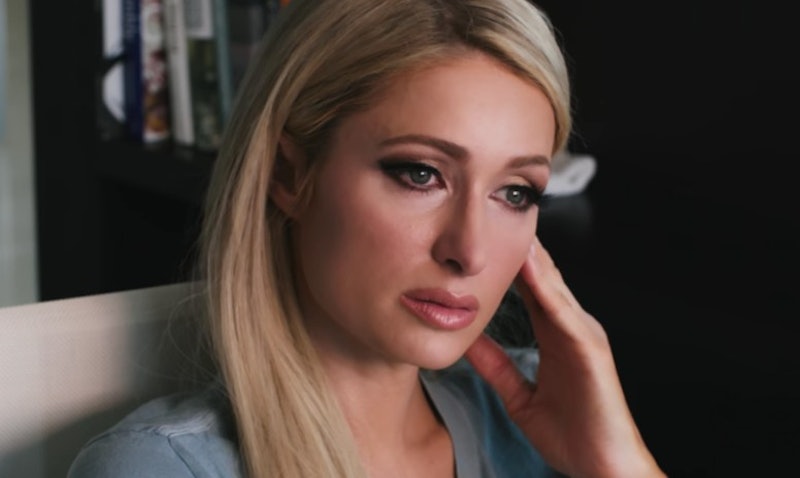 In a new interview with People, Paris Hilton opened up about the alleged abuse she faced as a teenager while attending a boarding school in Utah. Hilton spoke with the outlet about both the physical and verbal abuse she allegedly endured at Provo Canyon School in the late 1990s after being sent there by her parents, Rick and Kathy Hilton, in hopes of transforming her partying ways and other behavior. (Bustle reached out to Provo Canyon School for comment on Hilton's claims, and Dr. Adam McLain, the school's group director and chief executive officer, told Bustle in a statement, "Originally opened in 1971, Provo Canyon School was sold by its previous ownership in August 2000. We therefore cannot comment on the operations or patient experience prior to this time.")

Hilton said at 17 she was sent to a series of boarding schools that focused on behavioral and mental development. She claims Provo Canyon School, the last school she attended for 11 months, was the worst. "I knew it was going to be worse than anywhere else," she said. "It was supposed to be a school, but [classes] were not the focus at all. From the moment I woke up until I went to bed, it was all day screaming in my face, yelling at me, continuous torture."

She continued, "I think it was their goal to break us down. And they were physically abusive, hitting and strangling us. They wanted to instill fear in the kids so we’d be too scared to disobey them." Hilton claimed that she was once even held in solitary confinement after the school found out she was planning to run away.

While attending the school, Hilton said she was only able to speak to her family "maybe once every two or three months," because the students were "cut off from the outside world." She said she tried to tell her parents once what was happening, but claimed the staff always interfered and convinced the parents the kids were lying. At 18, Hilton left the school, but said she was too scared and "ashamed" to discuss the abuse — until now.

Three of Hilton's former Provo Canyon School classmates appear in her YouTube documentary This Is Paris, and make similar allegations about the school. Some even claim that they were forced to take medication and were restrained as punishment. The This Is Paris trailer first dropped on Aug. 17 and Hilton was seen opening up about something that had happened to her when she was younger that caused her to "still have nightmares." The beauty mogul will share her full experience in the documentary when it officially premieres on Sep. 14, which she told People she'll watch with her parents

The 39-year-old also doesn't plan to pursue legal action against the school. Right now, she'd rather raise awareness about these types of schools, while hopefully helping others in the process. She said, "I want it to stop for good and I will do whatever I can to make it happen."