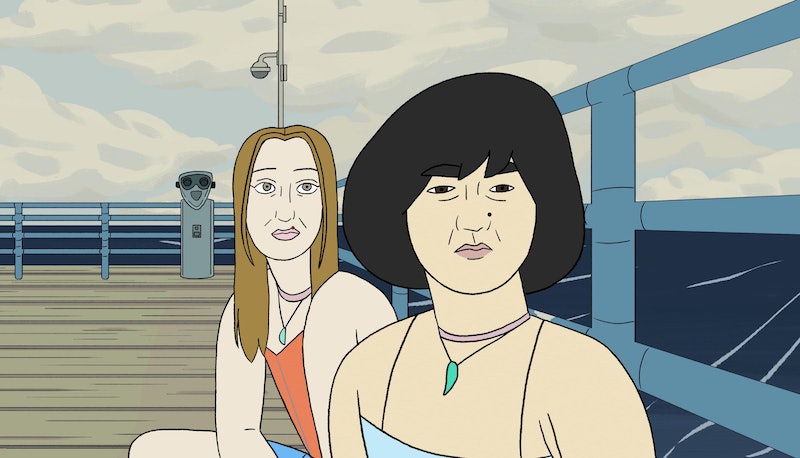 As unpopular 13-year-olds with changing bodies and low self-esteem, Maya (Maya Erskine) and Anna (Anna Konkle) are almost always anxious about their looks. That manifests in a very literal way in the PEN15 animated special.

Originally conceived as a live-action episode using prosthetics, “Jacuzzi” picks up right where Episode 7 left off. As Anna’s dad drives her and Maya away from the disastrous afterparty of the school play, the excitement that they’re going on vacation in Florida sets in. The girls croon songs to each other in the car, lovingly eye the pool at the hotel, and squeal when Anna’s dad gives them money and permission to wander the boardwalk by themselves.

There, they stumble upon a caricature artist who says he’ll give them a portrait for $46.25. It’s the exact amount of money they have for the whole weekend, but Maya insists she “has to have” one, so the girls gleefully sit for a picture. When they see the finished product, their faces fall: the artist drew Anna with a giant witch’s nose and stringy hair, and Maya with a face as round as a tennis ball and thin but visible hair dotting her upper lip. It’s every one of their bodily insecurities embodied in one image.

Anna and Maya scurry back to the hotel and lock themselves in the bathroom, shamefully hiding the picture at the bottom of their luggage. When they wake up the next morning, they realize their faces have morphed to match their caricatures, and it affects everything they do. Maya refuses to eat more than a cantaloupe slice because of her “fat” bobblehead. Anna can’t drink a glass of water without her long nose getting in the way. They avoid mirrors and look miserably at the gorgeous model on their sunscreen bottle.

Later in the episode, the two go to a sketchy-looking under-16 club after being invited by two boys. They have a moment of jittery excitement, but when a boy calls them “butt ugly,” the animation shifts again. Maya’s face gets rounder and her mustache thicker; Anna’s nose grows like Pinocchio. This leads to both Anna and Maya weeping on the floor of their hotel room. “I’m ugly,” Anna bemoans, to which Maya replies that her face is literally “as round as the moon” and “hairy as a bat” as her animated face takes up the entire screen.

It’s a creative and painfully relatable way to showcase how body dysmorphia can manifest in teenage girls. According to the Anxiety and Depression Association of America, body dysmorphic disorder (BDD) is when someone thinks about their perceived flaws for hours at a time. It often interferes with daily activities, like the way that Anna and Maya are unable to enjoy or be fully present on their vacation, and can lead to social isolation. According to the Office on Women’s Health, BDD is more common in women — who tend to be more critical of themselves — and usually starts in the teen years. A UK study found that 52% of 11 to 16-year-old girls regularly worry about how they look.

Anna and Maya are at the age where they’re particularly vulnerable to this kind of negative thinking, and the animation highlights their unhealthy hyper-focus on their “problem” areas. The show is very clear that this is all in their head: when Anna’s dad views her and Maya through his video recorder, the image of them on the screen isn’t distorted. But throughout the episode, they struggle to see past their own insecurities and return to the original view they had of themselves.

“Jacuzzi” doesn’t delve much more deeply into these issues, getting a bit lost in plots about underage drinking and stranger danger. But it will likely be explored more in the second half of Season 2. When Anna and Maya finally meet up with the boys who ghosted them from before, they’re temporarily giddy about their attraction. But we as viewers can see the truth of what’s happening in their heads: Anna’s nose is still huge and Maya’s face still looks like a pumpkin. External validation isn’t enough to quell their anxieties; it will have to come from within.

More like this
Here’s Where You Can Stream 'Schitt's Creek' After The Comedy Leaves Netflix
By Brad Witter
'Ramy' Will “Probably” End With Season 4, According To Ramy Youssef
By Brad Witter
The 'Reasonable Doubt' Cast Includes A 'Save The Last Dance' Reunion
By Grace Wehniainen
18 Principal Ava Quotes That Prove She's The Queen Of Shade On 'Abbott Elementary'
By Grace Wehniainen
Get Even More From Bustle — Sign Up For The Newsletter