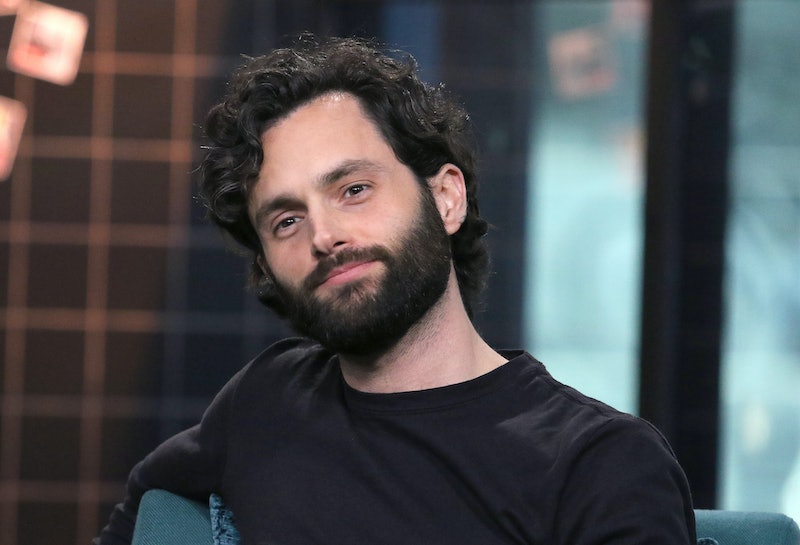 Spotted: Lonely Boy nuzzling up to the cutest little baby boy you've ever seen. On Monday, Oct. 5, Domino Kirke shared a photo of Penn Badgley with their newborn son, showing that this baby definitely has his dad's knack for intense eye contact. The adorable image features the former Gossip Girl and YOU star with his mask pulled down around his chin for the photo-op while his 8 week old son looks on somewhat skeptically. (Perhaps he heard all about Joe Goldberg's stalker antics from the womb.)

The actor and his wife welcomed their first child together on Aug. 11, but this is the first appearance their little bundle of joy has made on social media thus far, and his name has not yet been released. In fact, his birth wasn't confirmed until Kirke shared a photo on her Instagram of her placenta two weeks ago, declaring that she was "40 days postpartum."

This couple's road to parenthood wasn't easy. When Kirke first announced her pregnancy back in February, she revealed that she had experienced "two miscarriages in a row." prior to this pregnancy. "I stopped trusting my body and started to accept the fact that I was done," the doula wrote in an Instagram caption, seemingly referencing her son, Cassius Riley, from a previous relationship. "As a birth attendant, I’ve seen and heard it all. It takes everything I’ve got to detach lovingly from the losses I’ve been present for and be in my own experience." She also wrote a message directly to her then-unborn child, telling him, "You’re already teaching us how to stay in the day in a way we’ve never had to, little one. Thank you."

Art is starting to imitate real life for Badgley, whose YOU character, Joe, was seen preparing for fatherhood at the end of Season 2. There's no telling what Joe will be like as a doting dad when the series returns for its third season, but this photo might be as close to a sneak peek as we're going to get.

More like this
Confusion Reigns After Kanye Changes His Instagram Profile Pic To Kris Jenner
By Jake Viswanath
The Try Guys Cheating Scandal, Explained
By Grace Wehniainen
Dixie D’Amelio & Noah Beck “Love Each Other” Despite Breakup Rumors
By Julia Emmanuele, Jordyn Tilchen and Grace Wehniainen
The Real Reason Russell Brand Decided To Quit YouTube
By Sam Ramsden
Get Even More From Bustle — Sign Up For The Newsletter