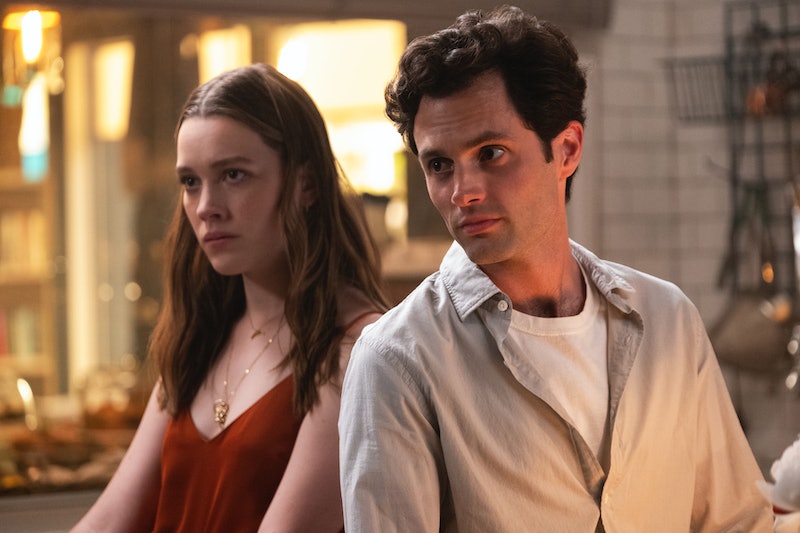 Spoilers for YOU Season 2 ahead. Even though fans are still reeling from the shock and anguish of YOU Season 2, it's not stopping them from endlessly speculating about what's to come, and this new idea is a doozy. This YOU theory suggests that Joe isn't Love's baby daddy. And given that viewers are fully aware of who Love truly is, would it really be that surprising? In fact, this is the sort of twist that should be fully expected in Season 3, which Netflix just announced is in the works.

As fans will remember, when Joe and Love temporarily parted ways midway through the season, she hooked up with an old flame, Milo — and Joe saw the whole thing through his creepy telescope. Viewers would later learn that the move was intentional on Love's part — she wanted Joe to watch her with envy (even creepier). Just weeks later, Love discovers Joe's secret storage unit, and just as he's thinking about killing her, she pulls out the shocking reveal that she's pregnant. That timing is especially convenient, isn't it?

The season ends with a scene of Love and Joe moving into a suburban house, with Love's baby bump on full display, so it's not likely that she faked the pregnancy to save her life. But the possibility that Milo is the baby's actual father is not only plausible, it's a fair guess. Not only is the timing of her announcement suspicious, but so is her overall pregnancy timeline, given that Joe and Love hadn't physically been together since their initial break. The last person Love would've been with was... Milo.

One fan, @itbelikeethat, believed that Love is lying about her baby's father simply because of the fact that Love is a "professional liar." Another fan also thought that neither Joe nor Milo was the father, suggesting the possibility of artificial insemination. After all, the Quinn family is very wealthy. And frankly, this show is bonkers enough that it wouldn't even be that shocking to find out that Forty is in fact the father. In most shows, this would be jumping the shark. But in YOU, it's just another Tuesday.

While it may be exciting (and terrifying) to witness Daddy Joe in action in Season 3, don't be surprised to find out that the baby isn't biologically his. And if he finds that out, who knows what he would do to Love's precious little family. Really, that baby needs to run as soon as it comes out of the womb.