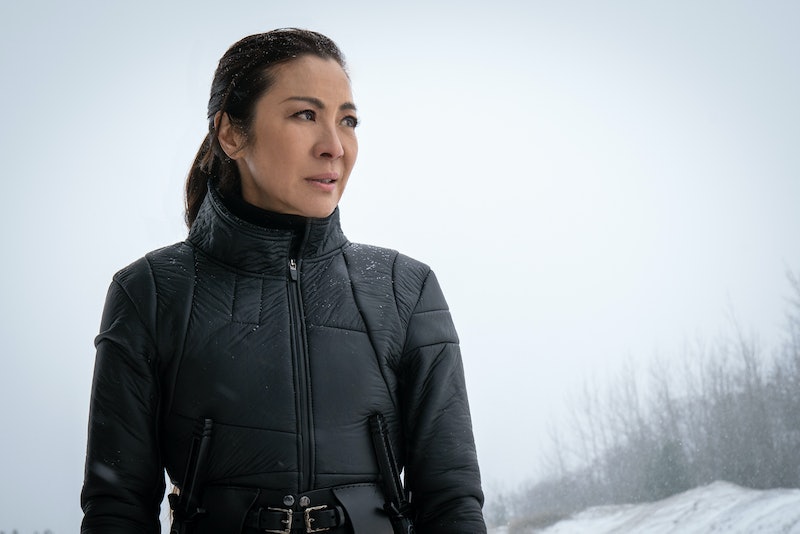 Major spoilers ahead for Star Trek: Discovery episode "Terra Firma, Part 2." Michelle Yeoh has been a staple on Star Trek: Discovery since the series premiered in 2017. But at the end of the most recent episode, "Terra Firma, Part 2," Philippa Georgiou, suffering from temporal displacement that would soon kill her, walked through a time portal and left Michael Burnham and the Discovery crew behind for good. The move wasn't entirely surprising considering a new Star Trek series starring Yeoh is in the works, but it was a moving sendoff for the character nonetheless. "There are so many stories to tell of her," Yeoh tells Bustle, assuring me that Georgiou is not gone for good from the Star Trek universe. "I know for a fact that if we are not giving up on her, we're not going to put her on the shelf."

In Season 1 of Discovery, Yeoh played Captain Philippa Georgiou, mentor to the series lead, Commander Michael Burnham (Sonequa Martin-Green). After her untimely death due to Burnham's mutiny, it was thought that Yeoh was off the show for good — that is, until Discovery ventured to the Mirror Universe and found out that their version of Philippa Georgiou was the ruthless Emperor of the Terran Empire. By the end of Season 1, Emperor Georgiou was reluctantly dragged into the Prime Universe, and Season 2 found her joining the Federation's mysterious, covert Section 31. In Season 3, flung almost 1,000 years into the future along with the rest of the Discovery crew, Georgiou began suffering from an unknown ailment.

In "Terra Firma, Part 1," it was discovered that, because Georgiou had both traveled 1,000 years into the future and across universes, her body was literally splitting apart. But since her crossing, the two universes had traveled too far apart, and the Prime hadn't even heard from the Mirror in 500 years, so sending her over wasn't an option. In order to find a cure, she and Burnham headed to an icy planet and encountered a man in a bowler hat named Carl, who urged Georgiou to step through his mysterious door. When she did, Georgiou found herself back in the Mirror Universe, still the Emperor of a violent and hateful place, and yet she realized that she no longer belonged in that world.

"She's definitely had a change of heart," Yeoh tells Bustle of Georgiou's time spent with the Federation. "She had an awakening in the sense that she realized yes, you could rule with fear and tyranny, but only for a short period. This was what she learned from being in the Prime Universe. It's about compassion, about hope. It's about when people have nothing to lose, then they don't care anymore. And when you don't care, you don't have a future."

Georgiou's time spent with the utopian Federation in the Prime Universe was enlightening, Yeoh says. "She was learning [the whole time]... and she never revealed to anybody else that she was learning because that would be a sign of weakness. But she listened, and she understood, and she saw how [the Federation] integrated, how they came together, how they trusted and they believed in each other. And I think that was what she came away with, [an] understanding to be a good ruler not just by fear. Before you realize that you can be better, you need to be better. Otherwise, there's just no way out of it."

In the most recent episode, "Terra Firma, Part 2," Georgiou shows the Mirror version of Michael Burnham the mercy that she neglected previously to and tries to instill in her that they can change, their world doesn't have to be the violent, ruthless, world of killers that they all know. But her Burnham still betrays her in the end, and they both die in a brutal fight.

That's when Georgiou is yanked back through the doorway onto the snowy planet with Carl and Michael Prime. Carl reveals himself to be "The Guardian of Forever," a mysterious figure from the Star Trek: The Original Series episode "The City on the Edge of Forever." In that old episode, Bones, Spock, and Kirk travel back to 1930s Earth and learn that even the smallest actions in the past can reverberate throughout the future.

At the end of the episode, seeing that she had changed and learned from her past mistakes, the Guardian invites Georgiou to travel back through the time portal back to a time when the Prime and Mirror universes were closer together, thus curing her ailment. It's unclear when or where Georgiou will next appear, but Yeoh is excited about the possibilities.

"Maybe one of the reasons why she is not in this timeline is to be able to go on more of her own adventures, more of her stories, more of the things that she has to live through."

Fans have been speculating that in order for Yeoh to star in a series about Section 31, she'd have to somehow leave the 32nd century and go back in time. But Georgiou traveling back doesn't necessarily mean that the new series will involve a lot of time travel. "The time travel has to stop at a certain point because you know, when you've traveled through time you change the past and you change the future, that's not so much fun anymore, but you have to get to a point in time where you can make a difference."

But Georgiou's foray into the 32nd century just might give her an advantage. "She's spent some time in the future, and that, for me, I think that's very delicious," Yeoh says. "I'm sure she's armed with some knowledge."

What her Imperial Majesty, Mother of the Fatherland, Overlord of Vulcan, Dominus of Kronos, Regina Andor, Philippa Georgiou Augustus Iaponius Centarius will do with that knowledge back in the past of the Prime Universe, however, only time will tell.

More like this
'Bachelor' Star Cassie Randolph’s Sister Is In The 'Yellowstone' Spinoff '1923'
By Grace Wehniainen
Everything To Know About The 'Daisy Jones & The Six' TV Series
By Maxine Harrison and Brad Witter
'RHOSLC' Star Jen Shah Refuses To Do A Post-Sentencing Interview With Andy Cohen
By Brad Witter and Jake Viswanath
Here’s What Happens To Bill & Frank In 'The Last Of Us' Video Game
By Brad Witter
Get Even More From Bustle — Sign Up For The Newsletter
From hair trends to relationship advice, our daily newsletter has everything you need to sound like a person who’s on TikTok, even if you aren’t.