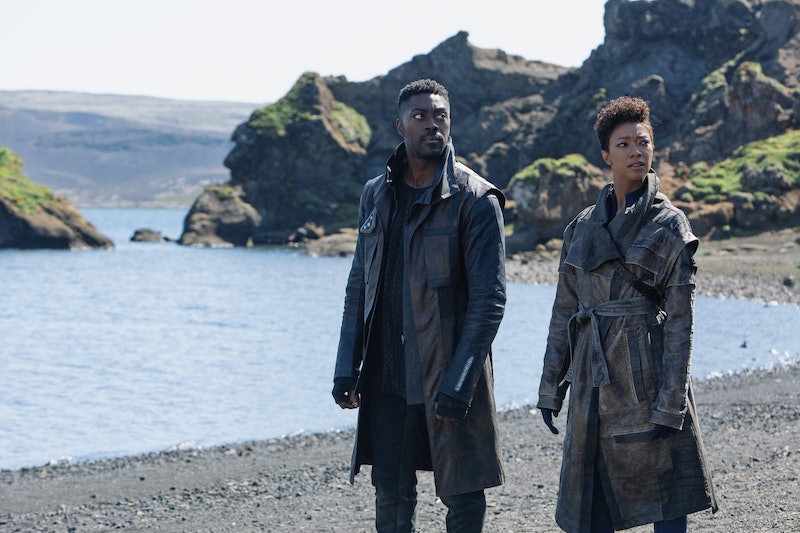 So far, Discovery has been quite a wild Star Trek ride. Season 1 introduced the show's lead, Commander Michael Burnham, played by Sonequa Martin-Green, along with a diverse cast of women and a mirror-universe storyline that was a feminist long con. Season 2 brought Discovery into Star Trek canon, with some visits from old characters from the Enterprise like Captain Pike and Spock, as well as a mystery that ended with Commander Burnham and the Discovery opening a wormhole and traveling hundreds of years forward in time in order to save humanity.

Season 3 of Discovery will hit CBS All Access on Oct. 15, and a refresher is in order just to keep track of all of the timelines and exactly where, and when, we find our fave Disco crew. Here's what to expect.

At the end of Season 2, Burnham and the crew took Discovery through a wormhole into the future to escape "Control," a dangerous, sentient artificial intelligence program created by Starfleet's secretive Section 31. Discovery's computer had inherited an incredible amount of data from their encounter with The Sphere, a lifeform hundreds of thousands of years old that had amassed a massive amount of information on planets, civilizations, and technology from all over the universe.

In its dying breath, The Sphere gifted Discovery with all of its data. But Control wanted to use it to basically well, control the universe. Jumping into the future was the only way to get Discovery away from Control. With Burnham leading the way in her mother's time-jumping Red Angel suit, she and Discovery travel 930 years into the future. The new year is 3188 and the galaxy is quite different from when we last saw it.

The Federation Is Gone... Sort Of

The new season opens with a strange scene. A lone Starfleet officer wakes up every day, searches the skies, and listens for contact from other Starfleet ships, yet gets no messages. He repeats this day over and over, waiting for some sign that other members of the Federation are still out there.

When Burnham first arrives in 3188, she's told that The United Federation of Planets no longer exists, and that all starships capable of warp drive were destroyed in something called "The Burn," an incident about 100 or 120 years prior which led to millions of lives lost and the end of The Federation as Burnham knew it. But as she says, "The Federation isn't about ships and warp drive. It's about a vision and those that believe in that vision."

Who Are The New Guys?

The first person that Burnham encounters in 3188 is a swarthy pirate type named Cleveland "Book" Booker (David Ajala), a courier with a love of animals and a fat cat named Grudge. Book helps Burnham acclimate to her new life in the future before she can reunite with the rest of the Discovery crew, which includes the returning Commander Saru (Doug Jones), Lt. Commander Paul Stamets (Anthony Rapp), Ensign Sylvia Tilly (Mary Wiseman), Dr. Hugh Culber (Wilson Cruz) and the mirror universe's Philippa Georgiou (Michelle Yeoh).

Season 3 of Discovery will also introduce the franchise's first trans and nonbinary actors to the Star Trek universe. In Episode 3, Blu del Barrio plays Adira, a nonbinary character who first hides their identity but then shares it after bonding with Stamets and Culber. In Episode 4, the audience will meet Gray (trans actor Ian Alexander), who is eager to fulfill his lifelong dream of being a Trill host.

What Can We Expect?

Earlier this year, Star Trek: Picard went the farthest into the future that the Star Trek audience had ever been. But Picard no longer holds that record. With Discovery now several hundred years beyond even the most advanced Star Trek series, the show has a lot of options. But as the Discovery Season 3 premiere shows, some of our favorites are always going to be around. There are appearances from Andorians and Orions, staple species from early TOS. And even if the Federation is on its last legs, humanity is still going strong.

There are also some Easter eggs that reference other Trek series to look out for. For example, many of the characters in the future seem unfazed by the fact that Burnham and Discovery are from thousands of years in the past. Book even mentions that time travel technology has been outlawed ever since the Temporal Wars. For any fan of Star Trek: Enterprise, the very mention of a temporal war should jog your memory.

Adira and Gray's connection to the Trill species may also hint at the return of some beloved Trill symbiont characters. Could Deep Space 9 fan favorite Dax still be alive in a new host? Trill symbionts do live hundreds of years. Dax was already pretty old, but hey, what's another 900 years?

Either way, Star Trek: Discovery is about to begin an exciting new chapter in the Star Trek universe, so buckle up.

More like this
Nicola Coughlan Shared A Lady Whistledown Excerpt From ‘Bridgerton’ Season 3
By Grace Wehniainen, Alyssa Lapid and Sam Ramsden
UK Viewers Will Have To Wait To Watch The Handmaid’s Tale S5
By Maxine Harrison
A New 'And Just Like That' Table Read Pic Confirms A Key Character's Return
By Jack Irvin and Grace Wehniainen
This Episode 6 Moment Foreshadows Viserys' Fate On 'House Of The Dragon'
By Grace Wehniainen
Get Even More From Bustle — Sign Up For The Newsletter