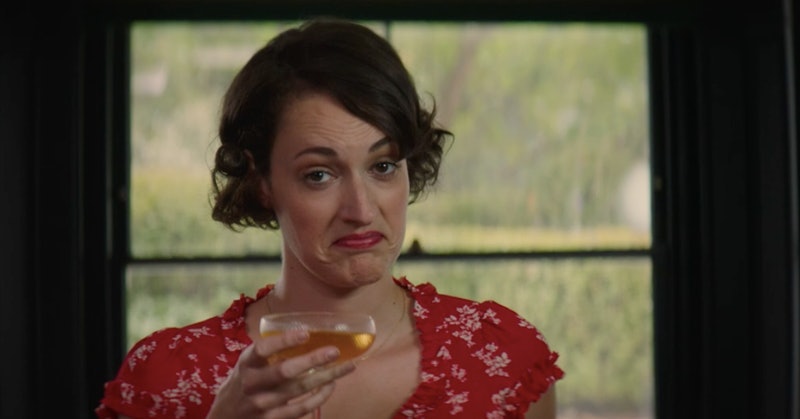 In an unlikely, but welcome collaboration, the award-winning screenwriter and actor Phoebe Waller-Bridge has teamed up with Edinburgh Gin to design a limited-edition bottle that aims to tell the inside story of her hugely successful one-woman-show-turned-TV-series, Fleabag, and raise money for the arts in the process. Cheers to that.

In a statement given to Bustle, it was confirmed the limited-edition bottle of gin has been designed by Waller-Bridge herself and will feature a hand-drawn illustration of the actor staring into a deep blue Edinburgh skyline. It’s a city close to the actor’s heart, as it’s where she first performed Fleabag at the Edinburgh Fringe Festival back in 2013.

The bottles are filled with the distillery’s classic London Dry gin and will be available to pre-order from July 20. Profits from the collaboration will help raise funds for emerging artists in the city of Edinburgh.

Additional details of the specially-designed beverage include a painted-on spot-lit solitary chair that Waller-Bridge would use to perform on stage, while the legendary Fleabag line “I Love You” (if you know, you know) is handwritten on the bottle by the actor alongside the equally iconic reply “It’ll Pass” — penned by Andrew Scott himself.

Speaking of the collaboration, Waller-Bridge described both gin and theatre as her “two great loves.”

“We wanted this bottle to capture a glimpse of Edinburgh in all her mystery and wonder, through the eyes of Fleabag who found her first home there.” In a statement, the actor continued, “I hope every purchase inspires outrageous and creative conversations over ice while bringing the beloved Fringe festival back to life. It’s important to add that Andrew Scott hand wrote a message on the bottle… if that isn’t incentive enough to hunt one down and hold it against your cheek, I don’t know what is.”

If you’re hoping to get your hands on a limited-edition bottle, you can register at edinburghgin.com to gain exclusive access to the pre-sale, which, as mentioned, takes place on July 20. The Fleabag Edinburgh Gin bottles are priced at £48 and are scheduled to go on general sale in August 2021.