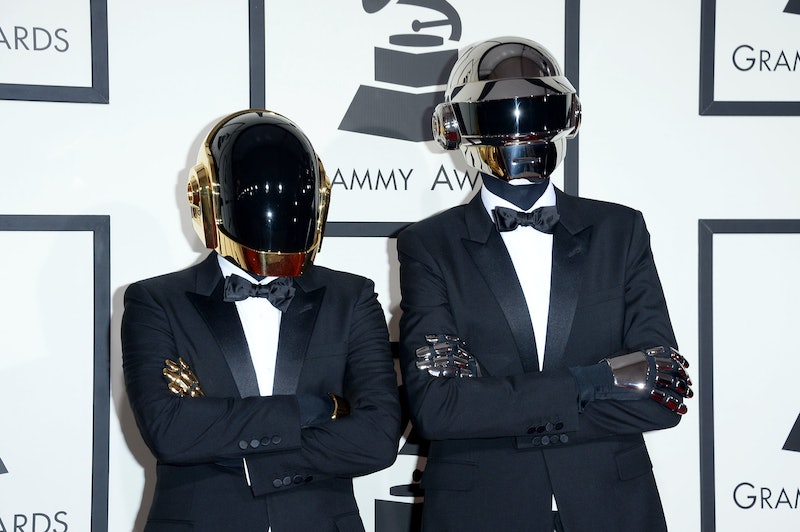 Daft Punk may have called it quits earlier this year, but the duo — always wearing their signature helmets — is unlikely to fade from the pop cultural imagination anytime soon. The electronic act was committed to their futuristic costumery for almost two decades, refusing since at least 2001 to appear anywhere without their helmets. “We wanted to draw a line between public life and private life,” one half of the band, Guy-Manuel de Homem-Christo, told Interview in 2001. “We didn’t understand why it should be obligatory to be on the covers of magazines as yourself.” But if you're curious about what lies beneath all the gleaming metal, flashing lights, and advanced ventilation, there are, in fact, a few great photos of Daft Punk without their helmets on out there.

The French duo, made up of members de Homem-Christo and Thomas Bangalter, have told Rolling Stone that the reasons for the mask come from an interest in "the line between fiction and reality, creating these fictional personas that exist in real life." Bangelter also said he likes that, because of the masks, "I don't have people constantly coming up to me and reminding me what I do." Daft Punk has been so successful at refusing to show their faces that even in their 2015 documentary Daft Punk Unchained, the two did interviews while wearing bags over their faces and sometimes standing with their backs to the camera.

But that cautiousness and commitment can only go so far, before the chaos of contemporary existence throws your plans in the garbage. In 2015, a slight hubbub was caused when electronic duo The Knocks posted a photo on Facebook of Bangalter and de Homem-Christo playing champagne pong in the Columbia Records offices while dressed like regular old guys, human faces and beards and slightly outdated outfits and all. While it's not clear who originally took the photo (seen in the link here), The Knocks got into some hot water for posting it, as, before its deletion, it became a major news story in the music world and compromised Daft Punk's mission to be viewed more as machine than man.

Though that's perhaps the most recent shot of Daft Punk in humanoid form, the two have been captured without their helmets on other occasions. In 2014, for example, TMZ caught the pair in the airport after the 2014 Grammys — which, incidentally, will have been the last time Daft Punk played a live show before this year's Grammys — looking as anonymous as possible in matching caps and shades. I'd best describe their appearance as "those guys you went to college with who turned out, you know, fine." There have also been a few other photos taken over the years showing the duo without their masks.

But as scandalous as these photos appear to be now, way back in the '90s, the French duo were far more lax about showing their faces. Everyone is different, and some Daft Punk fans may be devastated to have their illusion broken by some photos of the faces underneath the mask. But I think far more of us love the idea of a solving a fun mystery and peeling away layers, and finding photos of Daft Punk unmasked allows us to do just that.

This article was originally published on Feb. 9, 2017