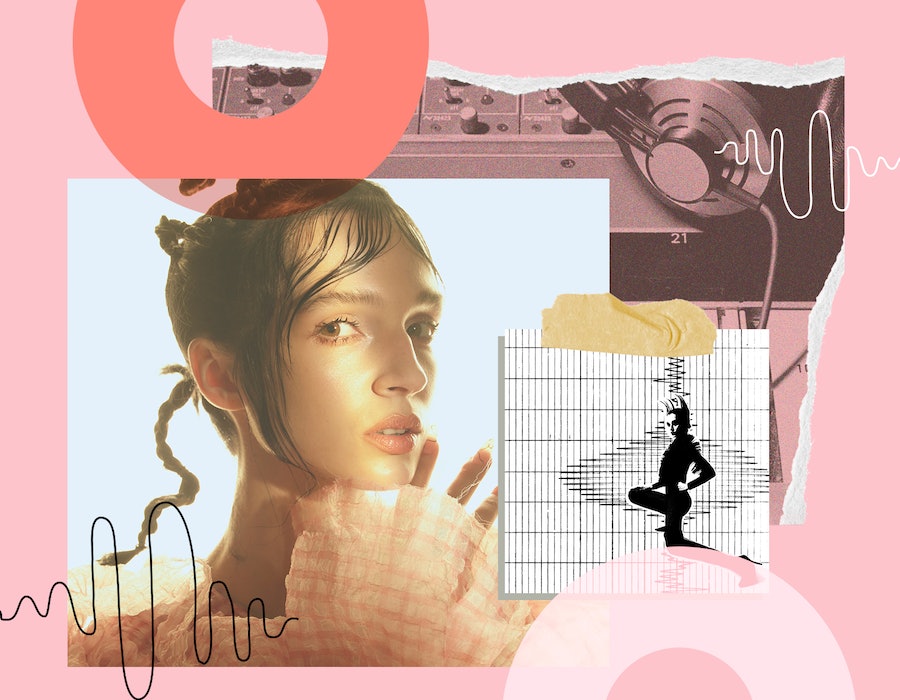 Poppy’s mask is slipping. The 26-year-old is speaking an octave below her trademark girly-robot tone, and is opening up about her life — the real one, not the impenetrable, uncanny existence she’s been broadcasting online since 2014.

As with all things Poppy, this lapse is likely intentional. The artist, born Moriah Rose Pereira, is entering a new, less manufactured phase with the release of her new album, Flux (a student of David Bowie, Poppy’s big on “eras”). After holding audiences at arm’s length for years, she’s finally welcoming them into her world.

In the music video for Flux’s titular song, a portal opens to a bubblegum pink planet, filled with one-eyed creatures bopping around a candy-coated mountainscape. Poppy wants you to traverse the uncharted horizon alongside her. “Flux is about exploring the unknown and not having a fear of it, of looking at it as a beautiful thing,” the Los Angeles-based artist tells Bustle. And if a video of Planet Poppy isn’t enough, she’ll soon welcome fans to her new Club Penguin-inspired app, PoppySphere. “I really wanted to create a Poppy world where I could be with my followers and make it a fully customized experience, where I could make up possibilities and no one could ever say no,” she says.

PoppySphere will be Poppy’s sole online home, save for her continued — albeit diminished — presence on YouTube. It’s a big shift for the artist, who first rose to fame as the so-called “Warhol of the YouTube era.” She launched her channel in 2014 with a video of herself eating cotton candy against a sterile white background, and followed it with “I’m Poppy.” — a video of Poppy saying “I’m Poppy” for 10 minutes straight, which has garnered nearly 27 million views. As she continued to post mesmerizing videos of herself doing mundane things in her measured, alien way, fans couldn’t help but speculate: Is Poppy human? Is Poppy in the Illuminati? Is Poppy in a cult? Is Poppy, herself, a cult? She doesn’t mind the theories. “They bring me joy,” she says. “I think it’s a study on how people consume media and art. It’s their way of filling in blanks.”

Poppy has been sure to leave plenty of blanks, but in recent years, fans have learned more about what’s going on behind the scenes. Flux comes a few years after her highly publicized split with her former creative partner Titanic Sinclair, who Poppy alleges manipulated her and leaked personal photos after their breakup. She channeled that raw anger into her 2020 hardcore album, I Disagree, for which she became the first solo female artist to be nominated for a Grammy in the Best Metal Performance category. While it still has plenty of intensity, Flux feels more indebted to ’90s rock, with its fuzzy guitar sounds and pop melodies. Her lyrics feel especially intimate.

Most of all, Flux is a celebration of creative independence, of tender new beginnings. It hasn’t always been easy; her time under the Diplo-founded label Mad Decent was marked by a restrictive record deal, creative clashes with a team of mostly-male executives, and her own music being released without her consent. But despite the music industry's attempts to stomp out her spirit, Poppy is doing what Poppy wants — and bringing her fans along for the ride.

Below Poppy talks about Flux, cutting out toxic people, and making it as a musician.

Are you in flux right now? What does the state of flux feel like to you?

I believe that I have never truly been out of a state of flux. When you are feeling the state of flux, there are a lot of unanswered questions and every step feels foreign, which is also a beautiful thing.

In your music video for “Her,” musician clones are being plopped on a stage and thrown away at random. Have you felt disposable in the music industry, and if so, how did you deal with that?

Yes. The music world always makes my tummy hurt. I think if you are a bit naive or new to the intense experience, you could go the wrong way a number of times. I think if you look within and you’re able to position yourself, there is always a hope to turn it around — but it does require that you remove yourself a bit from the situation. In my career, there were many times I had to remove myself and [situations] I was able to navigate out of, and I believe that maybe some power-super-energy of the world guided me to be able to navigate through it. When I look at other people, other artists that are currently trying to navigate [the industry], I do feel a little bit sad because I can recognize that they have some people that are using them ... It’s really important to do a reassessment, to figure out if people’s goals are aligned with yours, or if they have ulterior motives.

How do you take care of yourself in this treacherous industry?

I try to allow a lot of time to reflect on whether I’m happy with what I’m doing ... If there’s something that feels like it hurts me from the inside, I don't want it around me anymore. When I find those signs to be more apparent — maybe they appear in a red flag or a blinking light — I have to recognize that and remove them.

You posted your first video,“Poppy Eats Cotton Candy,” in November 2014. Why did you choose YouTube as your artistic medium at the time, and would you do it all over again?

Especially at that time, I was seeing how people could post whatever they want and people from all over the world could interact with it. The videos I started posting were just because I thought they were fun and they grew after that. It was a beautiful thing, and it really launched the project and my message, and I don't take that lightly. There is no part of me that would have done it any differently.

What is your relationship to YouTube these days? Are you very online?

Currently, I use [YouTube] to post music videos and my makeup video tutorials. I like to keep it concise. I really do enjoy posting on there, but I also have been developing my own game as a way to reach my fans as well. It’s called PoppySphere and it’s going to be launching soon.

No way! Tell me more about the game.

I really enjoyed playing Club Penguin when I was younger. [PoppySphere] is a game but it’s also a chatroom and you can design your own avatar. That will be the first version of it, and in the second version there will be activities and games. I just want to communicate with my fans on PoppySphere, so I’m patiently waiting for the final version to be out because that is the only app I want to ever use.

On Finding Inspiration In David Bowie & Her Cat, Pi

What’s the strangest thing you’ve ever written a song about?

You haven’t heard it yet, but I wrote a song about my cat — but I don't think that’s strange, that’s adorable. His name is Pi. He is going to rule the world one day: he can open doors and pee in the toilet.

It's always been David Bowie. Every album and body of work differs greatly and every era was stepped into so confidently.

I have an older sister that would take me to a lot of shows; she’s an avid concert goer. I would tag along and we would go record shopping together. One time in particular that stands out to me is when I was record shopping with her and came across American Thighs by Veruca Salt. I picked up that album based on the album cover. I was drawn to it and it ended up being one of my favorite albums. I take things I am attracted to very seriously. I love good packaging and good colors and I always feel like there is a reason why I am drawn to things.

Was there ever a moment when you felt ready to give up on musician life?

When I was held against my will at the first record label, that was when I wanted to stop. But you know, the things you learn.

When did you first feel like you made it as a musician?

I consider “making it” to be being able to live off of your art, so I feel that it happened a while ago.

What were you doing before you were able to live off your art?

I was eating canned beans and walking dogs.

More like this
Twitter Is In Awe Of Taylor Swift’s “Lavender Haze” Music Video
By Jake Viswanath
Shakira’s Record-Breaking New Song Takes Direct Aim At Her Ex Gerard Piqué
By El Hunt
Cruz Beckham Teased New Music With An Adorable Nod To Mom Victoria Beckham
By Stephanie Topacio Long
8 Easter Eggs From Taylor Swift's “Lavender Haze” Music Video
By Shahed Ezaydi
Get Even More From Bustle — Sign Up For The Newsletter
From hair trends to relationship advice, our daily newsletter has everything you need to sound like a person who’s on TikTok, even if you aren’t.