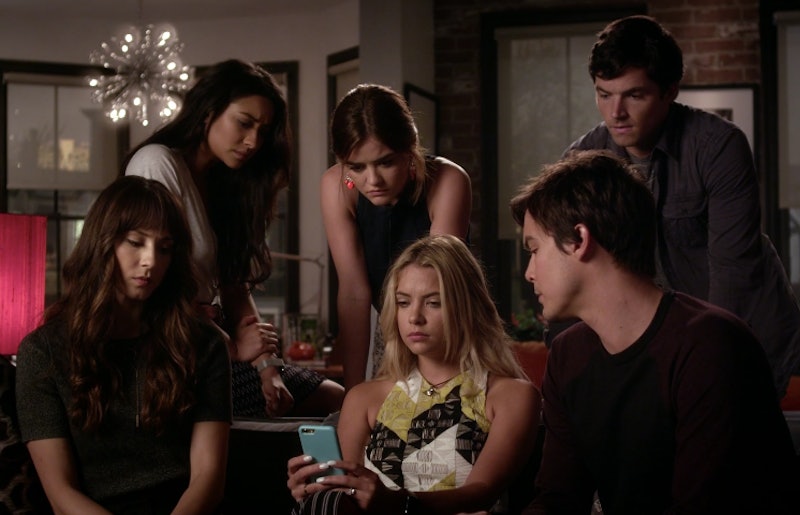 There's a new A in town, or, well, in a town a few miles away. HBO Max confirmed on Thursday that the Pretty Little Liars reboot/spinoff, officially titled Pretty Little Liars: Original Sin, is coming to the streaming service. The show will take place "in the same universe" as PLL, but won't feature any of the original liars. Instead, per the press release obtained by Bustle, Original Sin will focus on an entire new cast of characters living in a brand new town, Millwood.

Rumors of a Pretty Little Liars reboot first popped up in early September, when The Hollywood Reporter wrote that Riverdale showrunner Roberto Aguirre-Sacasa was developing a new series based on the groundbreaking Freeform show. Bustle reached out to the writer at the time, but did not receive a response. Now, the news has finally been confirmed, with the reboot earning a full season order at HBO Max. Though technically not a spinoff or a reboot, really, Original Sin joins previous offshoots of PLL, which launched both Pretty Little Liars: Ravenswood and Pretty Little Liars: The Perfectionists, both of which lasted only one season and featured actors and characters from the original series. Based on what we know so far, it seems like Original Sin will be something completely different for "a new generation," according to a Tweet posted by the PLL Twitter account. "New Town. New Secrets. New Little Liars," the account teased, along with a graphic that reads, "It's not what you think, bitches. — A."

Aguirre-Sacasa shared the same graphic on his Twitter, promising a series full of "secrets to die for," but failing to provide answers on anything else — like any potential casting or premiere date. Here's everything we know about the Pretty Little Liars reboot so far.

We're Not In Rosewood Anymore

Original Sin will take place in Millwood, a town haunted by "tragic events" that happened two decades ago. The drama will begin when a group of teen girls start receiving mysterious messages from "A" as payback for their parents' actions from 20 years earlier. The town, which is "miles away from Rosewood, is described as "blue-collar" in the press release, which suggests it might have a bit more of a low-key vibe than Rosewood, which was pretty idyllic if you didn't count all the murderous teenagers, dirty cops, and suspicious teachers.

The press release also said the show would be a "dark, coming-of-RAGE, horror-tinged drama," which should sound familiar to anyone who has watched Aguirre-Sacasa's other teen shows, Riverdale, and Chilling Adventures of Sabrina. Unlike Riverdale, however, Original Sin won't be confined by network standards — this is HBO after all — so it's possible the show will be scarier than ever.

Unfortunately, it's looking pretty unlikely that any of the original PLL cast will be involved in the reboot. The change in location, not to mention in "generation" suggests that this is a brand new story with a brand new perspective. However, the press release did stress that Original Sin was "within the existing Pretty Little Liars universe." You never know who might pop up.