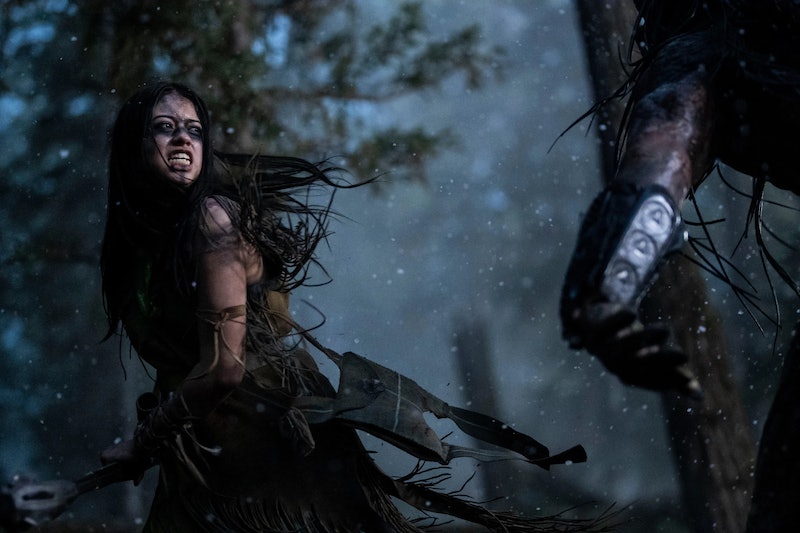 Loyal fans of the Predator films will likely be surprised by the setting of Prey, the new prequel to the franchise. Unlike the previous movies, which are futuristic, sci-fi thrillers, Prey takes place in North America in the early 1700s.

Viewers who aren’t familiar with the Predator franchise, on the other hand, can dive right into Prey, which dispenses with the franchise’s lore and focuses instead on Naru (Amber Midthunder), a young Comanche woman. Naru is a gifted hunter — not that her family or tribe takes her aspirations seriously. They also dismiss her when she insists that there’s a dangerous creature lurking in the woods… a creature that soon reveals itself to be the Predator.

As Naru, Midthunder delivers a star-making performance, full of dynamic action and intense emotion. Director David Trachtenberg told CinemaBlend that Midthunder’s acting chops shone through from her first audition. “The second that I met her, I knew [the role] was most assuredly going to be her,” he said. “She is just uniquely talented at saying so much with so little. … I think setting eyes on her for the first time, seeing her behavior and hearing her speak, you just sort of immediately connect with what she’s experiencing. And that can’t be done by everyone.” She keeps viewers hooked through the whole film, right up until its shocking ending.

Below, how Prey ends — and what it means for the Predator franchise.

How does Prey end?

Throughout the film, the Predator picks people off one by one — both Naru’s fellow Comanche hunters and French traders who temporarily capture Naru and her brother Taabe (Dakota Beavers). Though Naru and Taabe escape while the Predator is slaughtering the French, the monster eventually finds them, too, and Taabe sacrifices himself so that Naru — and her beloved dog Sarii — can escape.

Although she’s not out of the woods yet, Naru has discovered two of the Predator’s weaknesses: It only attacks those it perceives as a threat, and it does so using a shooting mechanism embedded in its helmet. Using this knowledge, she sets a trap for the Predator by kidnapping a French trader and using him as bait. To disguise herself, she eats a medicinal herb that cools the blood — which means she doesn’t register for the Predator as a threat, and can take it by surprise.

The Predator arrives and kills the French trader, just as Naru planned. She sneaks up on him and shoots him from behind, knocking off his helmet — which she grabs before fleeing. The two of them engage in a brutal fight, with Sarii helping Naru out when necessary. Their battle culminates in Naru luring the Predator to a mud bog, where it sinks in. It then manages to rise up out of the mud, and shoots at Naru — but Naru has placed its helmet on the opposite side of the bog, and as a result the Predator shoots itself in the head instead.

Naru makes her way back to her tribe’s encampment, carrying the head of the Predator and having painted herself in its glowing green blood. She tells her tribe they must go elsewhere for protection, and is finally recognized as the warrior she is.

How does the prequel set up the Predator franchise?

Director Dan Trachtenberg explained to SFX Magazine, via Bloody Disgusting, that the story sets up the Predator’s first trip to Earth. “I want to specifically say this, because I think there’s been some confusion how people have understood: in my mind, this is not a prequel movie, this isn’t, ‘Let’s tell the origin of the Predator,’” he said. “This is really something that’s set prior to the original Predator movie. And the Predator creature in this one, this is its first time traveling to Earth.”