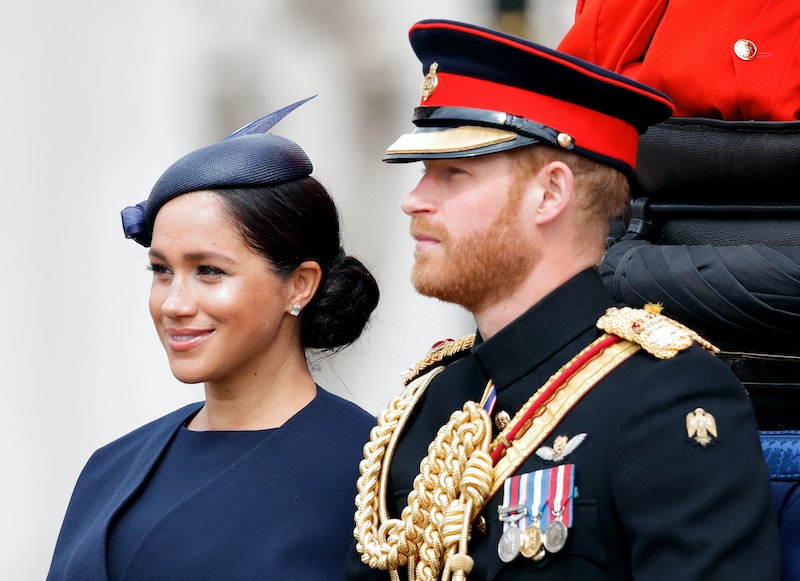 The Duke and Duchess of Sussex have kept a relatively low profile since moving to Los Angeles and stepping back from their senior royal roles. Aside from a few public appearances where they have helped deliver or assemble food parcels, the couple have kept their speaking engagements limited and, until now, solo affairs. But both Prince Harry and Meghan Markle joined a call with the Queen’s Commonwealth Trust (QCT) over the weekend to discuss injustice and the experiences of young people, as shared by QCT’s social channels.

Speaking from their home in California, the Duke and Duchess, who are president and vice-president of the QCT, said “there is no way that we can move forward unless we acknowledge the past.” They spoke openly about the need to make change, to accept being “uncomfortable” and the role of young people in driving systematic change for the better.

“We’re going to have to be a little uncomfortable right now," said the Duke. “Because it’s only in pushing through that discomfort that we get to the other side of this and find the place where a high tide raises all ships,” added the Duchess. "Equality does not put anyone on the back foot, it puts us all on the same footing - which is a fundamental human right.”

They joined Chrisann Jarrett, host of the discussion and co-founder of We Belong; Alicia Wallace, director of Equality Bahamas; Mike Omoniyi, founder of The Common Sense Network; and Abdullahi Alim, who leads the World Economic Forum's Global Shapers, on the video call.

Speaking about the importance of tackling racism on a "micro level, individually", Meghan said: "What have we done in our past that we put our hand up? I think this is a moment of reckoning, I think, where people go, 'you know what, I need to own that, maybe I didn't do the right thing there. I knew what I knew but how it's time to reset in a different way'."

Unconscious bias was also discussed. "When it comes to institutional and systemic racism, it's there and it stays there because someone, somewhere, is benefiting from it,” said Harry. "We can't deny or ignore the fact that all of us have been brought up and educated to see the world differently. However, once you start to realise that there is that bias there, you need to acknowledge it. And then you need to do the work to become more aware… so that you can help stand up for something that is so wrong and should not be acceptable in our society today.”

Meghan added: “It’s not just in the big moments, it’s in the quiet moments where racism and unconscious bias lies and thrives. It makes it confusing for a lot of people to understand the role that they play in that, both passively and actively”.

Harry continued: “The optimism and the hope that we get is from listening and speaking to people like you, because there is no turning back now, everything is coming to a head. Solutions exist and change is happening far quicker than it ever has done before.”

Speaking about the QCT speaker series, CEO Nicola Brentnall said: "We have started a conversation about how the Commonwealth’s past – of colonialism, of the subjugation of peoples and the on-going legacy of such historic injustice – can and should shape the identity of the organisation, how it develops its offer and how it works in the future." A spokesperson for the Sussexes said they “felt it was important to be part” of the discussions.

The QTC video coincides with new reports suggesting that the Duke and Duchess are in the process of officially and fully shutting down their Sussex Royal charity. According to Harper’s Bazaar, "paperwork has been filed with Companies House and the Charity Commission to formally close the charity [Sussex Royal] down."

Travalyst, the sustainable travel and tourism initiative, is now operating as an independent non-profit based in the UK, they added. And though shutting one charity down, they are already in the works to launch a new non-profit, Archewell.