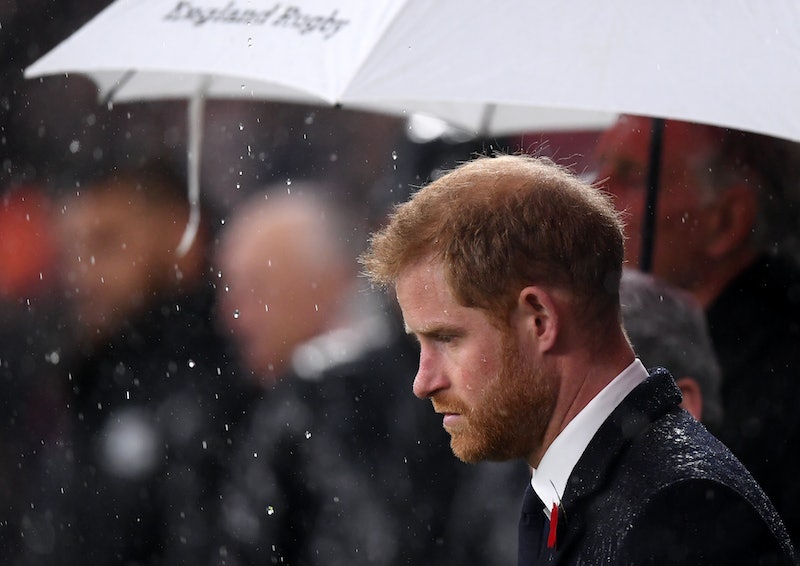 Remembrance Sunday is usually marked by two minutes silence and the royal family attending a ceremony at Whitehall packed with veterans and spectators. But, while the two-minute silence remained, due to coronavirus, the service at the Cenotaph had to be stripped back. Due to the fact he was in LA, Prince Harry couldn’t join the rest of the royals and The Sunday Times reported that Prince Harry was denied permission to have a wreath laid at the Cenotaph on his behalf.

The publication claims the Prince spoke to Buckingham Palace about laying a wreath. However, as he moved to the U.S. and stepped away from royal duties in March, courtiers denied him “on the grounds that he is no longer representing the monarchy.”The Sunday Times said that the Queen wasn’t aware of Prince Harry’s request. Bustle UK has contacted a Buckhingham Palace representative for comment on the reports and will update this piece should any be given.

After spending 10 years in the armed forces and founding the Invictus Games in 2014, Remembrance Sunday is a date pretty close to Prince Harry’s heart. As he couldn’t be in Whitehall with the Queen this year, he visited a cemetery of fallen soldiers in LA with Meghan Markle. They lay flowers from their own garden on two graves and placed a wreath. OK reported that alongside the wreath a plaque read “In Memory of the Men Who Offered Their Lives In Defence Of Their Country."

Prince Harry also appeared on the Declassified podcast on Remembrance Sunday where he said, “the act of remembering, of remembrance, is a profound act of honour. It’s how we preserve the legacies of entire generations and show our gratitude for the sacrifices they made in order for us to be able to live the lives we live today."

More like this
Prince Andrew’s Infamous Newsnight Interview Is Being Made Into A Film
By Frances Stewart
Princess Diana’s Brother Shared A New Photo Connected To Her Childhood
By Darshita Goyal
Helena Bonham Carter Doesn't Think 'The Crown' “Should Carry On"
By Sam Ramsden
The Spice Girls Are Set To Reunite At King Charles III’s Coronation
By Sam Ramsden
Get The Very Best Of Bustle/UK
Sign up for Bustle UK's twice-weekly newsletter, featuring the latest must-watch TV, moving personal stories, and expert advice on the hottest viral buys.