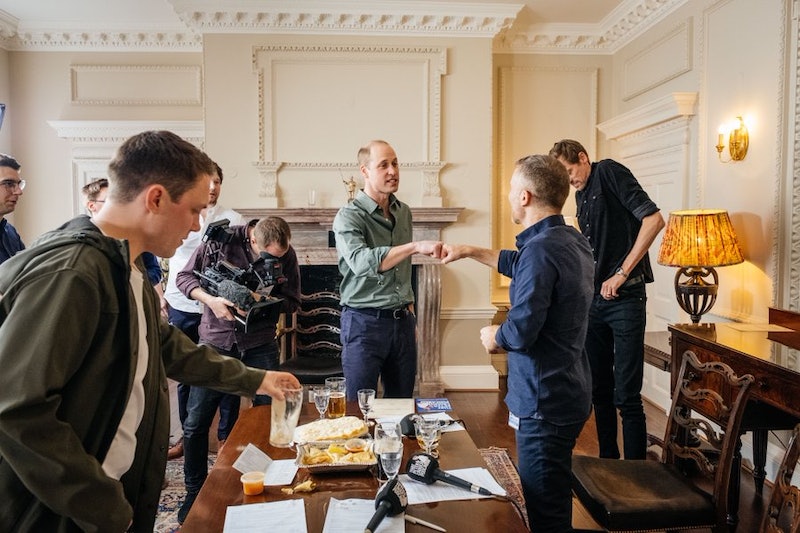 We all love a good takeaway, especially in these trying times. And it seems even the future King of England isn't immune to the allures of a delicious delivery when he gets a craving. During a recording for That Peter Crouch Podcast, Prince William ordered Uber Eats to the Palace and shared a curry with the podcast's hosts.

Prince William joined Peter Crouch, Tom Fordyce, and Chris Stark, on their podcast to spread the word about his Heads Up campaign and to promote openness around mental health discussions, particularly in men and through football.

A short clip of the episode shared on BBC 5 Live Sport's Twitter shows William walking in to the room with two big plates of curry and naan that he tells the hosts he's ordered from Samrat Indian Restaurant in Ealing, West London – AKA Crouch's local.

The Prince then jokes, "There's an Uber driver out there on the floor being frisked!"

Elsewhere during the interview, Stark asked what would happen if Prince George got "really good at football." Would William let his son play for Aston Villa, he asked? "Definitely. I reckon he could. I reckon he could be the all-time goal scorer. I mean I can see no reason why not."

This particular moment between Crouch, Fordyce, Star, and the Prince actually took place back in March, before social distancing measures were put in place, but was released this week alongside a follow-up video call between the royal and the hosts.

Earlier this week, William took part in another video call to promote Heads Up, this time joined by Steph Houghton, Tyrone Mings, Andros Townsend, Carlo Ancelotti, and David Beckham. During the conversation, Beckham opened up about how hard the '98 World Cup had been for him and spoke about how he likes to teach his kids to be open about their experiences with mental health.

You can listen to the podcast episode at the BBC Radio 5 Live website, or wherever you listen to your usual podcasts. And you can find out more about Heads Up via on their website and on royal.uk.

More like this
What To Know About Martin Bashir After Watching 'The Crown'
By Bustle UK
Here's The Role Lady Susan Hussey Played At Buckingham Palace
By El Hunt
Mollie King & Stuart Broad Just Shared The First Pic Of Their Baby
By Sophie McEvoy
The David Beckham Qatar Controversy, Explained
By Sophie McEvoy
Get The Very Best Of Bustle/UK