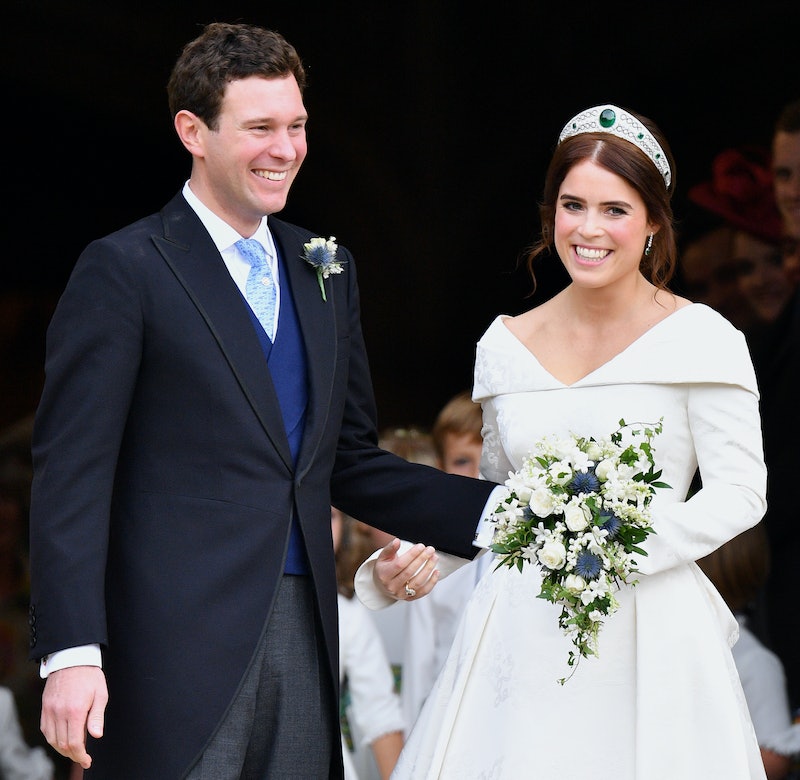 Less than two weeks after giving birth to her first child, Princess Eugenie revealed the name of her baby with husband Jack Brooksbank, along with a trio of new photos. "We wanted to introduce you to August Philip Hawke Brooksbank," Eugenie captioned her Feb. 20 Instagram post. "Our hearts are full of love for this little human, words can't express. We are excited to be able to share these photos with you.⁣"

In a subsequent Instagram story, Eugenie shared that the boy is named after his great-grandfather, Prince Philip, and "both of his great x5 grandfathers." The princess added that she's thinking of the 99-year-old Duke of Edinburgh, who's currently hospitalized for "observation and rest" after "feeling unwell," according to a statement from Buckingham Palace. Eugenie also noted that this is the birthday weekend of her father, Prince Andrew.

In addition to thanking her more than 1.3 million Instagram followers "for so many wonderful messages," Eugenie expressed appreciation for essential workers, including their "wonderful midwife," whom she noted both took the family photos and "came to discharge our boy." The royal family also shared one of the images, noting that the couple, who wed in October 2018, has "been touched by the well wishes."

The royals previously announced that baby August was born on Feb. 9 at London's Portland Hospital, weighing 8 pounds, 1 ounce, and that Brooksbank was present for his birth. They further noted that Queen Elizabeth II was "delighted" to learn of the arrival of her ninth great-grandchild, who is currently 11th in line to the throne, per the Telegraph. The same day, Eugenie shared a close-up black and white Instagram photo of the baby's hand grasping her finger but chose not to reveal his name at the time.

The couple moved into Prince Harry and Meghan Markle's Frogmore Cottage near Windsor Castle in November. The Duke and Duchess of Sussex, who are currently living in Montecito, California, were "delighted to be able to open up their home to Princess Eugenie and Jack as they start their own family," a source close to the couple told People.

And now that the Brooksbanks have brought their baby home, August can occupy the same nursery the Sussexes renovated ahead of their son Archie's birth in 2019.