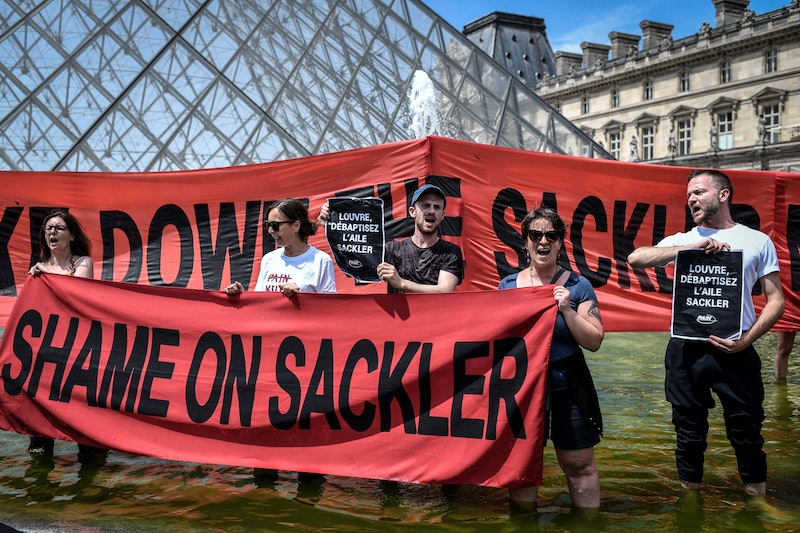 Hulu’s new drama Dopesick is a sweeping attempt to tell the story of opioid epidemic in America from as many sides as possible: patients and families, politicians and regulators, pharmaceutical reps and big pharmaceutical companies. Adapted from Beth Macy’s 2018 investigative novel of the same name, the show tracks how OxyContin was aggressively marketed in the early ‘90s, leading to increased prescriptions and subsequent abuse of the drug. The behemoth company leading the charge was Purdue Pharma, which after thousands of lawsuits, was dissolved in September by a federal bankruptcy court. Here’s what you need to know.

What is Purdue Pharma?

Purdue Pharma is the pharmaceutical company that manufactures OxyContin, the most popular opioid painkiller in America and the backbone of Purdue’s business. According to a ProPublica dive into Purdue records, OxyContin had “more than 28% of the total market share” for the decade starting in 2008. Since Purdue brought the drug to market in 1995, the company’s sales have totaled over $35 billion, with the owners of Purdue receiving at least $8 billion in profits.

A famous name you’ll hear in connection with the opioid crisis is Sackler. Members of the family have owned Purdue Pharma since 1992 and have been consistently named in the lawsuits brought against opioid companies. But the name might sound familiar even if you haven’t been following the lawsuits. The Sacklers are philanthropists, though they've more recently been accused of using donations as a form of “reputation laundering.” The Metropolitan Museum of Art in New York has said it would stop accepting donations from the Sacklers, but it hasn’t renamed the Sackler Wing, home to the Egyptian Temple Of Dendur. There’s a Sackler Gallery at the Smithsonian, and the name Sackler was removed from London’s Serpentine Gallery.

What’s happening in the lawsuits?

Thousands of lawsuits have been filed against opioid companies, including Purdue but also more familiar names like Johnson & Johnson. The lawsuits have been brought by individual opioid users and their families, but also municipalities, states, and tribal authorities. Many of those cases have been streamlined into multi-district litigation in Ohio, which alleges that opioid companies aggressively marketed opioids while at the same time downplaying the risk of abuse they posed. Purdue was a named defendant until the company filed for bankruptcy in 2019. Members of the Sackler family involved with Purdue have denied wrongdoing and maintain they have always conducted themselves ethically and legally.

What’s happened since the bankruptcy?

For a while, not much happened at all. In September, though, a bankruptcy court approved a settlement that will see members of the Sackler family pay $4.5 billion of their estimated $13 billion toward litigation fees and supporting substance abuse treatment across the country. Purdue Pharma, which is no longer owned by the Sacklers, will see future opioid profits dedicated to substance misuse treatment and prevention. Members of the Sackler family involved with Purdue have also agreed to release troves of company documents which reveal more about the Purdue marketing strategy as well as its level of understanding about the risks opioids pose.

Why is the bankruptcy settlement being appealed?

Because the settlement happened in bankruptcy court, there was no open trial, which means there wasn’t a full reckoning of Purdue’s role in the opioid crisis. But perhaps the bigger sticking point is that the bankruptcy settlement largely protects the members of the Sackler family who were involved with Purdue from personal liability. Even after the distribution of $4.5 billion, according to the New York Times, “they will remain among the richest families in the country.”

More like this
The Mysterious Gunther Corporation From 'Gunther’s Millions' Has Dissolved
By Brad Witter
Pamela Anderson's Sons Brandon & Dylan Have Their Own Hollywood Careers
By Arya Roshanian
Wait, Is Barney Stinson Related To Sophie On 'HIMYF'?
By Gretchen Smail
Pamela Anderson’s Dating & Marriage History Could Be Its Own TV Series
By Jake Viswanath
Get Even More From Bustle — Sign Up For The Newsletter
From hair trends to relationship advice, our daily newsletter has everything you need to sound like a person who’s on TikTok, even if you aren’t.