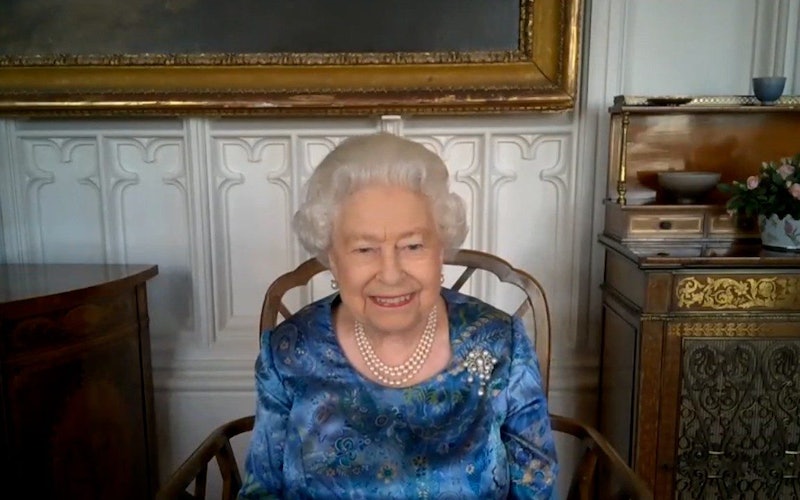 There's no doubt about it: video calling services are booming. Even Queen Elizabeth II is getting involved. Jumping on her second official video call, the Queen joined personnel from the Army, the Royal Navy, and the Royal Air Force to discuss their ongoing work and activities away from the forces.

"As Head of the Armed Forces, Her Majesty is regularly updated on operations around the world," read the caption shared with the video of the conference call on the royal family's Instagram. She spoke to Chief of Defence Staff General Sir Nicholas Carter; Able Rate Sophie Levy, who serves as an Aircraft Handler; Lieutenant Colonel Barrie Terry, who is currently deployed on a UN peacekeeping mission in Mali; and Lance Corporal Shanwayne Stephens, who serves in The Queen’s Colour Squadron.

Dialling in from Windsor, the Queen looked regal as ever: donning a patterned blue dress, her signature three-string pearl necklace and pearl drop earrings, and a pearl-encrusted pin for good measure. "Her Majesty proved herself to be a dab hand when it came to lockdown communication," The Telegraph said, praising the ease with which she approached the digital mode of communication.

So at ease, in fact, that she couldn't help but smile. When Lance Corporal Stephens, who is also the pilot of the Jamaican bobsleigh team, explained his new training regime – which involves pushing cars up and down the road – she positively beamed: "Well I suppose that’s one way to train.”

Her Majesty concluded the call by stressing how great it had been to speak them all, adding: “Everybody’s been extremely busy with the pandemic and doing a wonderful job.”

This marks the Queen's second official video engagement, but technically her first solo video call. In June she joined Princess Anne on a call with carers. The rest of the royals have also jumped on the virtual meeting bandwagon. The Duke and Duchess of Cambridge have dialled into hospitals, schools and even hosted a bingo night. Prince Charles, Princess Anne and the Duchess of Wessex have all also taken part in video calls, and even the Duke and Duchess of Sussex – no longer senior royals – have appeared on screen.

More like this
This Wordle Rival Is Taking Social Media By Storm
By Sam Ramsden
Meghan & Harry Respond To Jeremy Clarkson’s "Apology" Over *That* Column
By Sophie McEvoy
Here’s Why Tyler Perry Helped Prince Harry & Meghan Markle When They Moved
By Marina Watts
Prince Harry Incorrectly Recites Christina Aguilera’s “Genie In A Bottle” Lyrics
By Jake Viswanath
Get The Very Best Of Bustle/UK
Sign up for Bustle UK's twice-weekly newsletter, featuring the latest must-watch TV, moving personal stories, and expert advice on the hottest viral buys.