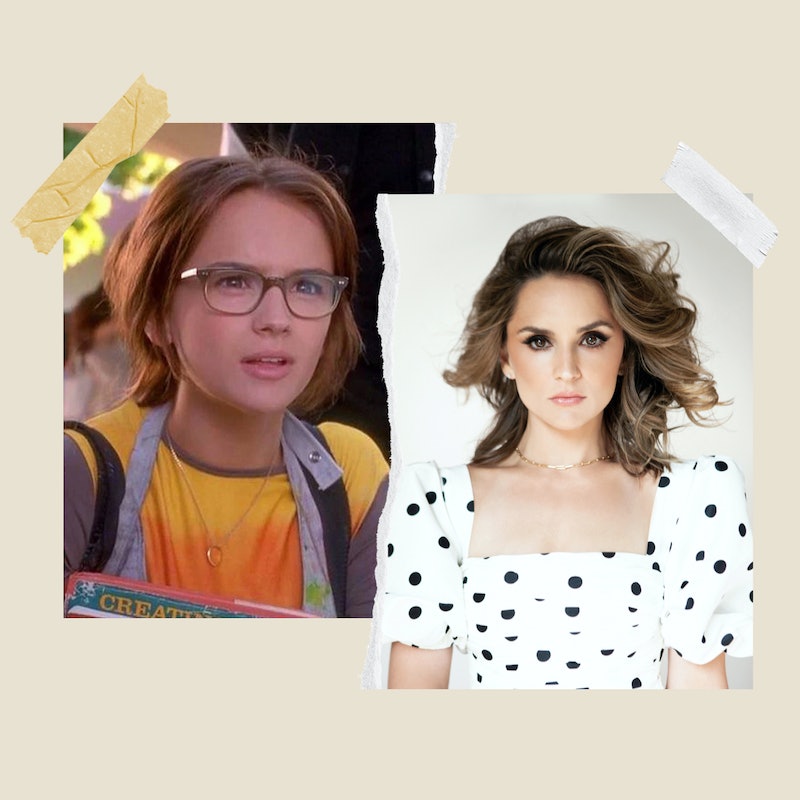 She’s All That star Rachael Leigh Cook is sweetly, almost disconcertingly self-deprecating. She’s reflecting on the 1999 film that made her a household name, and how Netflix’s new gender-swapped remake, He’s All That, compares. “The focus and the impetus of the plot of this [new] movie is the inflated importance of social media and quantitative popularity, and the fleeting, fickle, and totally superficial nature of those relationships — and in naming what’s not important in a very real way,” she tells Bustle.

Then she quickly adds with a laugh, “You’re way smarter than me, so please try to make that make sense.”

In the remake, Cook plays a single mom to Padgett (Addison Rae), a high school influencer tasked with making over school outcast Cameron (Cobra Kai’s Tanner Buchanan). She’s not technically playing a grown-up Laney Boggs — her He’s All That character is listed on IMDb as “Anna Sawyer” — but Cook notes the character didn’t have a name in the script and seemed “Laney-ish” to her. “I certainly didn’t, in the performance, shy away from the parallels in any of my delivery,” she says. “I didn’t fight the writing.”

Twenty years on, Cook is watching a new generation of actors step into the roles she and Freddie Prinze Jr. inhabited. This is a breakout role for Rae (much like She’s All That was for Cook), but Rae “isn’t making any of the same mistakes that I made,” Cook insists. “I think the worst mistake young actors make is thinking that acting seems really straightforward and easy and that everyone can learn a couple lines and be cute and go through the motions.” Rae, she says, was diligent. “For someone who’s as insanely, wildly popular as she is, she doesn’t have an ego about listening to new ideas from the director.”

Despite her deep knowledge of the original film, Cook says she didn’t have to impart any intergenerational pearls of wisdom to Rae and Buchanan. “I just said this to her and Tanner — that [I hope] this movie affords them as many opportunities as the original did for me,” she recalls.

Below, Cook talks about Laney’s most iconic line making an appearance in He’s All That, why Prinze Jr. isn’t in the new film, and what the next She’s All That remake will look like in 20 years.

You’ve talked about how there are aspects of the old film that are dated. How does the new version contend with this concept of transformation — making someone “hot and popular”?

It addresses it in a much more aware and socially responsible way, overall. How they go about that involves a social media focus, and it involves a gender swap of the person being made over, because as we know, it’s totally unacceptable to make a movie in which one of your protagonists makes over a woman into a classically more commercially validated vision of beauty. That is not OK anymore! [Laughs]

Not that it ever should have been OK. And by the way, it is acknowledged in both films that this is not cool that either person did that, but it is also OK to make a movie about people learning lessons and learning that they were wrong.

The original centered the male gaze, and there was some sexualization happening. How is this film moving away from that energy?

Well, let me be clear that though I think we’re moving in the right direction, what’s occurring to me just in this moment is that we will have to make a movie another 20 years from now where it’s just not OK that anyone even considered this — that movie is not funny at all. So regardless of the gender swap, it’s occurring to me that it will probably need further updating. But unfortunately, people will always find ways to lift each other up and tear each other down and be horrible in new ways, so I’m sure there’s tons of great content like that coming our way.

At one point in an interview, Freddie Prinze Jr. said that “every generation” should have its own She’s All That. We don’t know what the next film will look like, but what I’m hearing you say is that there’s a universality to the core concepts.

Absolutely. And maybe 20 years from now it will be a movie about a person who exists outside of gender forming a more respectful relationship with their robot partner, and I can’t wait to see that, too! [Laughs]

Did you chat with anyone from the original cast about being a part of He’s All That?

[The producers] did try to find a way to involve Freddie [Prinze Jr.] as well, but he declined to be involved in the production itself because he didn’t feel like there was an organic way to do so. And frankly I tend to agree. They were going to construct something, and I think that he feared that it would seem like just that. So I did talk to him about it and we had a dialogue that went something like that. But he was very supportive of me doing it, and of the whole project, and he is to this day. I’m excited for him to see it and I’m excited to hear what he thinks.

You got to play this cool new single mom character, but would you ever want to play Laney again?

Well, it could be by virtue of the fact that it’s the same writer, Lee Fleming, who did the original and maybe he was hoping I would do it or he loves characters like the one he wrote for me in this movie, but I feel like there’s a ton of similarities between the way he wrote Laney Boggs and the way he wrote Addison’s character’s mother — who, by the way, doesn’t have a name that’s ever spoken out loud in the script as it was delivered to me. The way it was written, I couldn’t help but feel like they were trying to make people wonder if it was Laney but older. I think it’s possible, but this was never discussed with me; it was not my intention, I was just following the writing.

If she’s not in this movie, where do you think Laney Boggs is now?

I like to say that she would be busy moving her family out of Portland, because it’s too commercial, and running for public office.

Other than Laney, which character from the original do you relate to most now?

His performance has an ease and a gentleness to it that I also think, whether intentional or not, you are also bringing to this film.

Oh my God, thank you.

It felt like that was a twist on the original, pulling the best thing out of that character and bringing it into the new one.

Him and the Jeopardy! scene, I think is my favorite scene from the old one.

Do you have a favorite She’s All That meme?

Anything where I’m wearing the falafel hat.

Oh yeah! Let’s go with that. Stop being better at this interview than me! [Laughs]

This article was originally published on Aug. 26, 2021