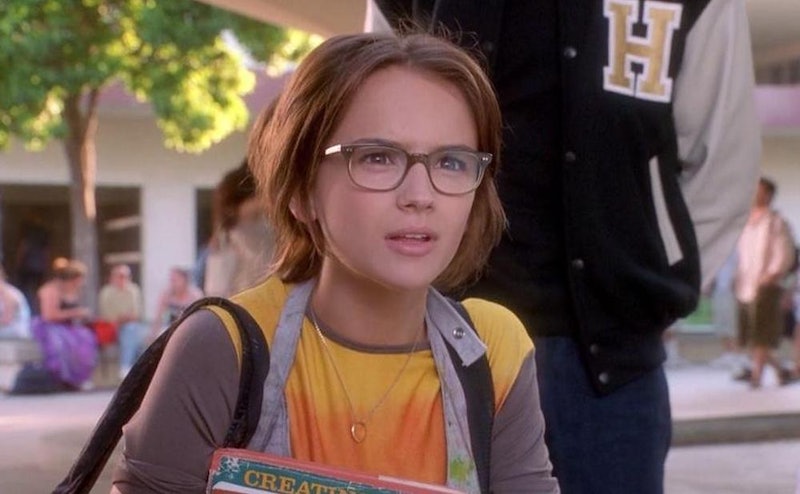 Rachael Leigh Cook can't believe people want to talk to her about the 20th anniversary of She's All That. "I mean that with no disrespect," Cook tells me when we speak over the phone. "I have nothing but love for the film." But after two decades, the actor can admit that the film, which she made when she was just 18, is "dated in so many ways." The most obvious way? Her character Laney Boggs' transformation, in which she takes off her glasses, plucks her eyebrows, and takes down her ponytail to reveal the "new, but not improved, just different Laney Boggs."

Laney's Pretty Woman-like makeover was parodied by Not Another Teen Movie two years after She's All That's release, and it's became something of a trope in movies and TV shows. "It’s very funny," Cook says of the scene's long-lasting impact, "but how does it feel to be a trope? I don’t know, I guess it’s a weird honor."

It's also a bit of a curse, too, says the actor. After all, that makeover scene is all about the male gaze, since it's Freddie Prinze Jr.'s popular jock Zack Siler who deems Laney more appealing now that she's cleaned up nice. "The bet, the f*cking bet" to turn the loner artist into the coolest girl in school is a completely sexist scheme, and in 2019, the problematic aspects of She's All That, an otherwise rather innocuous teen rom-com, are hard to overlook, even for Cook.

"I don't know why I feel so socially responsible for the film," she says before answering her own question: as a mom, she doesn't want young girls like her daughter to think they have to bend to certain beauty ideals. Says Cook, "That I’m part of that messaging is not the best."

It's why the actor is not sure when or even if she'll ever show her 5-year-old She's All That. " I have to get her solidly out of the princess phase before she’s allowed anywhere near that movie," Cook jokes. "I think her first stop as far as movies I’ve been in is The Baby-Sitters Club or Nancy Drew."

While Cook wrestles with the film's problematic messaging, she's also quick to mention what she likes about it. For instance, that falafel hat Laney wears at work, which was all her idea, and working with Prinze Jr., who was nearly brought to tears while filming the climactic "bet" scene. "He’s such a sensitive soul," Cook says of her co-star. And even though she hasn't seen the movie in 15 years, she thinks she did a good job in the scene where she "eats sh*t" in the gravel parking lot after Taylor Vaughn (Jodi Lyn O'Keefe) tells her she's "vapor."

That's why Cook, who next stars in Hallmark's Valentine In The Vineyard, doesn't want to beat herself over She's All That. "If I made that movie again today would I offer up an apology with it? Yes, to an extent," she says. "But do I retroactively apologize for this film? Not for one second."

She just wishes that the film's focus and the conversation that surrounds it was less about Laney's physical transformation and more about her internal one. "Everyone brands this a makeover movie and it is," the actor says, "but to me, one of Laney’s biggest problems is her inherent bias and gigantic attitude."

Laney is a tough character with a lot of ambition, not to mention preconceived notions about everyone around her. Unfortunately, all of that gets overshadowed by a new haircut and a red dress. But if this film was made today, Cook thinks it would focus on Laney's internal struggle as an outsider who is trying to find their place in society without completely conforming to it.

"I think that’s the most important sort of perspective that should and could be represented in movies now," Cook says, citing Love, Simon, the queer high school rom-com, as an example of how teen movies are moving in the right direction. "I thought it was so full of heart and so lovingly made and I love that they made it."

It's why if there were ever to be a She's All That sequel, Cook proposes that after reuniting at their 20-year high school reunion, Laney, now an art teacher who put back on her glasses and paint-splattered overalls, helps a recently divorced Zack find himself. "His life’s kind of in shambles," Cook theorizes, "and it’s like 'Hey, tables have turned, let me help you out.'"

It's a twist on the original movie plot that Cook thinks would work for the current time. Perhaps, it also gets at the message she thinks She's All That was trying for all along.

"I think what this movie is saying, or rather, meant to say, is don't judge a book by its cover, be ready to change your mind on who people are," the actor explains. "I mean, when was the last time you changed your mind? I can barely remember, and that’s pretty sad. So, yeah, if this is a movie about people changing their minds, then it’s still pretty relevant."

Is it possible that She's All That for all its problems is actually more timely than anyone could have imagined? Twenty years later, Cook would sure like to think so.