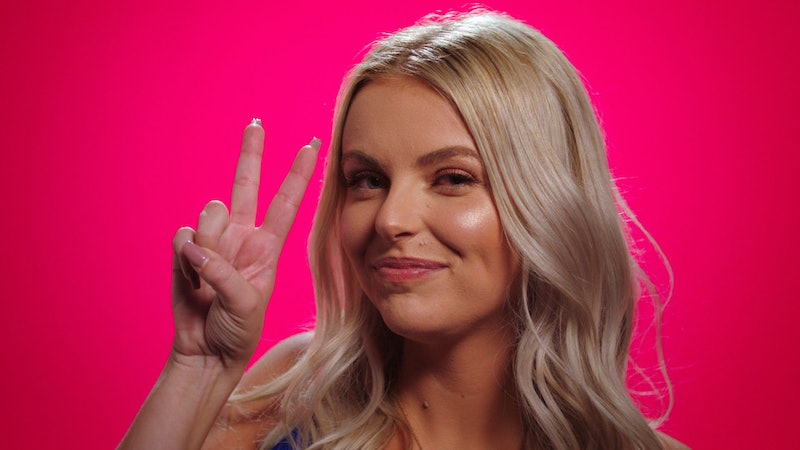 Another catfish has entered The Circle. A later addition to Season 3, Rachel Ward is a 24-year-old from California who’s competing as her best friend’s boyfriend Jackson. She decided to play as someone else because men aren’t judged as critically about their looks on social media, and she’s sure she can pull it off.

Not only does Rachel personally know Jackson — who she described as attractive, “really good with the girls,” not over the top, and someone you want to sit down and have a cup of coffee with — she says she’s “been a bro” her whole life. “All my friends are guys, so I know that this is going to be a winning combination,” she says in her intro video. Flirting will “absolutely” be part of Rachel’s strategy, too. “Being a girl, I know exactly what they wanna hear,” she added. “Like, ‘Your hair is so on point.’ It’s so easy to flirt with girls.”

For the record, Jackson isn’t Rachel’s type: she prefers face tattoos and dad bods. Here’s everything else to know about the marketing manager.

In December 2017, Rachel earned an economics degree a semester early from Sonoma State University’s School of Business and Economics, where she pledged the Gamma Phi Beta International Sorority, served on the Panhellenic executive board, was part of the Economics Club, and volunteered for Girls on the Run International. After graduation, Rachel conducted research and analysis for the tech company Freenters before taking on marketing and social media roles at Unbaked Bar in Los Angeles and Kaleidoscope Digital Marketing in the San Francisco Bay Area, according to her LinkedIn account.

Rachel began working for her current employer, Kiosk advertising agency, in the Bay Area in February 2018, but relocated to their LA office in May 2019. Kiosk’s website lists Rachel as the media supervisor of their paid social division, noting that her client experience ranges from marketing technology to boutique culinary campaigns.

Rachel also worked at PacSun during college, moving up from a sales associate to assistant manager.

As of publication, Rachel has less than 40 posts on her Instagram page dating back more than five years. Her first post — a photo taken at Coachella in April 2016 — seems in line with her love of music festivals. In May 2018, she attended BottleRock Napa Valley (but noted she was only there to see Muse), and she returned to Coachella in April 2019.

She also seems to be a fan of Disneyland, having become an annual season passholder in August 2019. Months later, she attended a taping for Dancing with the Stars. And in 2020, she took a pre-pandemic vacation to Europe that included stops in Spain and France before celebrating one year of living in LA. She’s definitely committed to social media: she once drove over two hours just to take an Instagram photo at the Antelope Valley Poppy Reserve in Lancaster, California.

On Twitter, Rachel shares humorous musings like the fact that she randomly worries about Pete Davidson and would be willing to break her lease because the closest Target to her doesn’t sell alcohol. Earlier this year, she also asked her followers to pray for her friends, adding that “nothing is wrong they just have boyfriends.” She’s also shared a small handful of TikTok videos.

Stay tuned to see if her catfishing strategy on The Circle pays off.