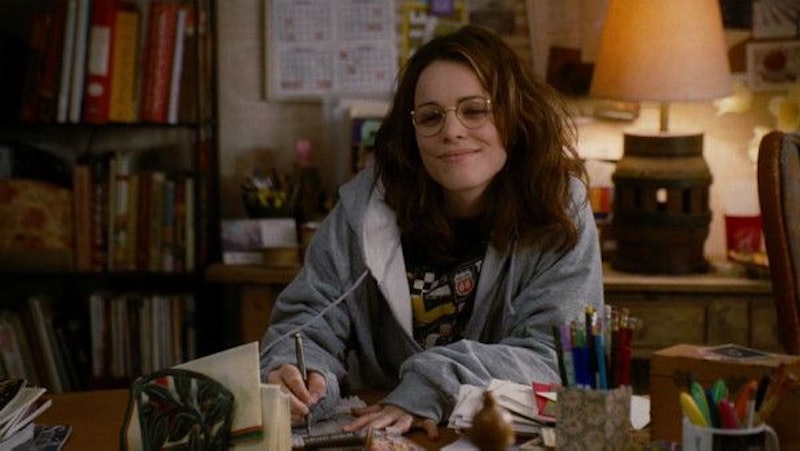 From the first moment Amy Stone (Rachel McAdams) appears on screen in The Family Stone — swinging a well-used NPR canvas tote over her shoulder while carrying a hamper full of dirty laundry — it’s clear that she doesn’t give a f*ck. As the grumpy youngest sister of the Stone family, she’s the antithesis of a lovable Hallmark character with their shiny blowouts and pashmina shawls. As Bustle’s sister site NYLON wrote on Instagram, “She had main character energy.” But I love Amy because she, unlike so many ladies in this genre, she's hilariously cruel. She knows that she’s brutal, but she doesn’t care how unlikable she comes off. Many mistake her for the antagonist of this film, but to me, Amy is the beating heart of the holiday classic.

Though the film was a critical flop when it came out, with one review calling the film “exasperating” and another and calling it “feel-bad holiday film about a repellent family,” it has since become a Christmas cult classic. It follows a tight-knit family who are meeting eldest son Emmett’s (Dermot Mulroney) new girlfriend Meredith (Sarah Jessica Parker) for the first time over Christmas. Unfortunately, they do not take a liking to her. The Stone’s home is a sanctuary of banter, liberal sensibilities and cozy wool sweaters. Their family is kooky and unrefined, the kind of casual environment that’s the opposite of the uptight, ultra-professional Meredith. At the eye of the storm is Amy.

On the surface level, Amy appears to be the villain of the story. She's a worst-case scenario to encounter when meeting a boyfriend's family: she poisons the well before the rest of the Stones have even met Meredith declaring unequivocally: “I f*cking hate her. ” Later she sabotages every chance Meredith has of making a good first impression, including making fun of her throat tick. But there’s more to Amy than what meets the eye.

While she is undoubtedly a comedic hero — her snarky comments are high art — Amy also serves as an intimate portrait of someone faced with loss. Her mother Sybil’s (Diane Keaton) cancer is back and this time the odds are not good. Everyone is acting out in their own way (Everett says the reason he wants to propose to Meredith in the first place is because of his mothers diagnosis). While the whole family is acting out in outlandish ways, Amy’s petty methods of rebellion are by far the most relatable of the brood. Meredith is merely a scapegoat for all of their anxiety and grief, but especially Amy’s.

Like all good holiday movies, it culminates on Christmas morning. Meredith is at odds with the entire family at this point (she may have even slept with Everett’s brother, but that's a different story), but then something unexpected happens. She pulls out a neat stack of gifts for everyone: a framed black-and-white photo of Sybil, pregnant with Amy. In a rare moment of vulnerability, Amy breaks down in tears as the rest of the family gets equally emotional. But in classic Stone fashion, this shared tenderness doesn’t last long. Soon after, Amy and Sybil accidentally slam the kitchen door into Meredith, causing her to drop her special egg strata onto the ground. As all three women slide around the floor, screaming laughing and covered in uncooked eggs, it becomes clear that Amy’s vendetta is all but over with. It’s a moment of messy vulnerability — Amy's exact brand.

But it's this chaotic, highly emotional energy that I love about Amy the most. She's unapologetically herself, even when she's behaving wickedly.