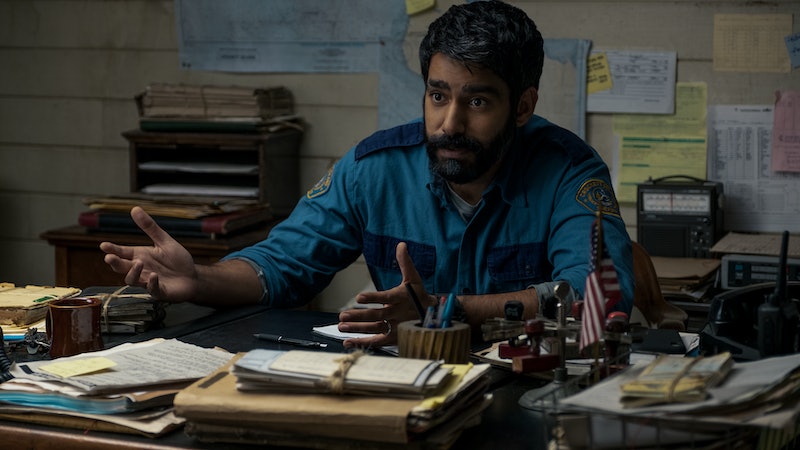 According to star Rahul Kohli, Midnight Mass’ Sheriff Hassan is meant to represent the “fusion of two polar opposite” ideas. In some ways, he’s the “quintessential American hero,” a reserved yet vigilant man molded after Western film icons like Clint Eastwood and John Wayne. In other ways, though, he’s “America's greatest villain: the bearded brown dude.”

After losing his wife and being racially profiled by his fellow NYPD officers, Hassan moves to the sleepy fishing village of Crockett Island with his son, Ali. He wants to fade into obscurity, and most of the Christian townsfolk are happy to ignore him — the sole Muslim around whose office is tucked into the back of a grocery store. But when Father Paul arrives with a vampiric “angel” he believes will bring miracles to Crockett, Hassan must contend with a tide of religious fervor — and ultimately try to save the very people who would spurn him at their first chance.

Though Kohli is British, Indian, and an atheist, he felt a deep responsibility to nail Hassan’s portrayal, particularly because he’s faced some of the same prejudice that his character does. Despite not being Muslim and living in the UK, he experienced Islamophobia after 9/11, an event that Hassan also brings up in the show as formative to his life. Before Kohli booked his first major role as Ravi Chakrabarti on iZombie, he was “part of that group of actors who were only [being asked to read the parts of] terrorists.” He says he never saw “Muslim heroes” growing up, and when he did, the depictions only involved the character “shoot[ing] AK-47s into the sky” and having a “generic Middle Eastern accent.” Midnight Mass felt like an opportunity to create a more positive narrative.

To ensure his portrayal of Hassan was accurate, Kohli spoke with his friend, Mohamed Bouissa, a devout Muslim who in turn consulted on the show. In particular, Bouissa helped to tweak the scene where Hassan educates Beverly Keane and the rest of the PTA about Jesus’ significance to Muslims. (“It wasn't that heavy originally; it didn't go into the Quran that much,” Kohli explains.) A consultant also helped Kohli perform salat, the Muslim daily prayer ritual.

Kohli put equal preparation into depicting Hassan’s gruff, heroic side, which he sees as just as integral to who the character is. He listened to spaghetti western music while traveling to set, and dressed and stood a certain way to convey Hassan’s steady nature. “I wanted the audience to feel, if you looked at Hassan's silhouette, that is the sheriff. You're used to his poses, and his uniform. I'm even wearing cowboy boots under those jeans, which no one knows,” Kohli laughs. Yet because of Hassan’s religion, some Crockett residents view him as inherently threatening. In one notable speech, Hassan remarks, “I don’t intimidate. I don’t overshare or overstep or intrude in any way. I don’t even carry a gun. And still. Still. Beverly Keane, and a few others too, look at me like I’m Osama bin-f*cking-Laden.”

This perspective is ironic considering that out of all the characters, Hassan is one of the few who embody true dignity and decency. “Erin, Hassan, and Sarah Gunning are very much the purest of the adults. And it's no coincidence that they feature very prominently towards the end,” Kohli says. He adds that Hassan’s speech wasn’t meant to suggest that he wouldn’t help the townspeople amid their ensuing crisis, but that he simply, “wanted someone in that moment to know who he was and what's being asked of him before he does it.”

While classic cowboys are known for being self-imposed loners, there are other moments in Midnight Mass where Hassan reveals just how much being isolated wounds him. His son begins to question Islam, feeling tempted to join the rest of his classmates in attending church because he feels left out. Hassan begrudgingly lets him go, even though that leaves him to pray alone. But at the close of the series, they both find themselves awaiting death on the beach alongside Beverly — the same person who was so quick to deny them any humanity. While Beverly weeps alone and makes one last-ditch attempt to save herself, Hassan and his son accept their fates with grace and begin performing salat.

Though Kohli says working on Midnight Mass didn’t change his feelings about religion, he sees the show as an overall loving portrait of faith. “At first I thought we were making something blasphemous, and I thought, are we in trouble? Are we going to get pitchfork[ed] and picketed?” Kohli recalls. “But if you finish [the show], it comes right back to its original purity: that the word of God should be about love, about togetherness, about community.”