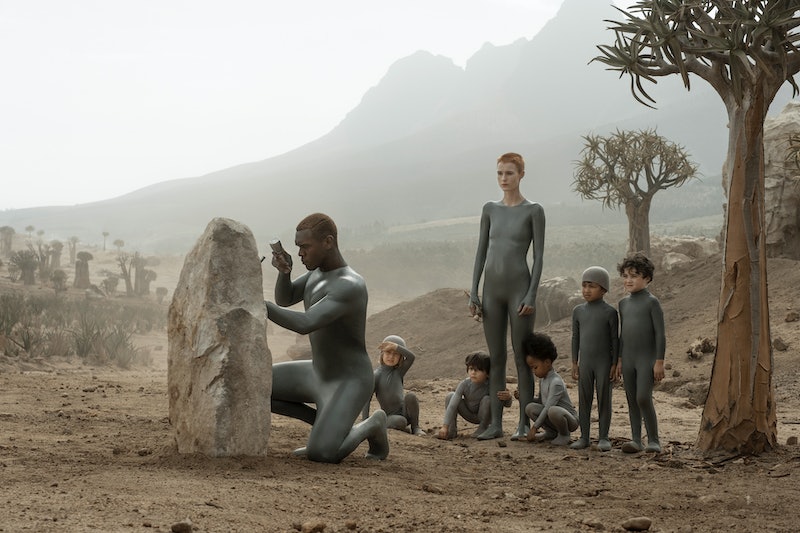 With its bleak and sprawling universe of android parents, ragtag orphans, and religious crusaders, HBO Max's new sci-fi thriller Raised By Wolves has the feel of a show based on an epic fantasy book series or perhaps a fever dream ignited by the actual calamities of 2020. In reality, creator Aaron Guzikowski (the writer of Papillon and Prisoners) got the idea ages ago: when he was a kid dreaming up darkly engrossing worlds with his little brother.

Still, even Guzikowski can’t deny the show’s relevance to current events. Take virtual learning, for example. “As a parent myself, I think you can give a kid an electronic device and it will serve as sort of a babysitter for a time,” Guzikowksi told Forbes, drawing a parallel between iPads and the androids who serve as parents on Raised by Wolves' Kepler-22b, a punishing planet where they’ve been sent to regenerate humanity. “There is something that's easy and comforting about that, but then, you know, slightly disturbing and off-putting about that as well.”

And yet in spite of its prescience, Raised By Wolves lacks the rich detail of the fully realized sci-fi worlds that so often start in books. Here, the androids wear stretchy silver lamé onesies for no apparent reason except to stake them as characters in a post-apocalyptic world. Babies are grown in synthetic wombs like fruit suspended in nutrient-rich Jell-O molds. The docile android known affectionately to her human children as “Mother” predictably rescripts her programming and self-weaponizes. Even Kepler-22b feels like a cheesy pastiche of the alien planets we’ve seen before: desolate and dangerously uninhabitable for the children meant to be raised there.

The conflict, too, feels familiar. Guzikowski says he had the medieval Crusades in mind when he mapped out the battle between the atheist designers of Kepler-22b's android-helmed human colony and the zealots who left Earth on what the show calls “The Ark.” The planet may be new, but its inhabitants are — to use Guzikowski’s word — “mirroring” ancient history.

And maybe that’s ultimately the point of Raised By Wolves. Regardless of which planet we're on, humanity is as destined to fight the same old wars as showrunners are to reuse the visual shorthand of '80s-genre movies. But for a series debuting at this particular nexus of ecological and sociopolitical turmoil, the notion that humanity is doomed in all its incarnations is a pitch-black place to start.