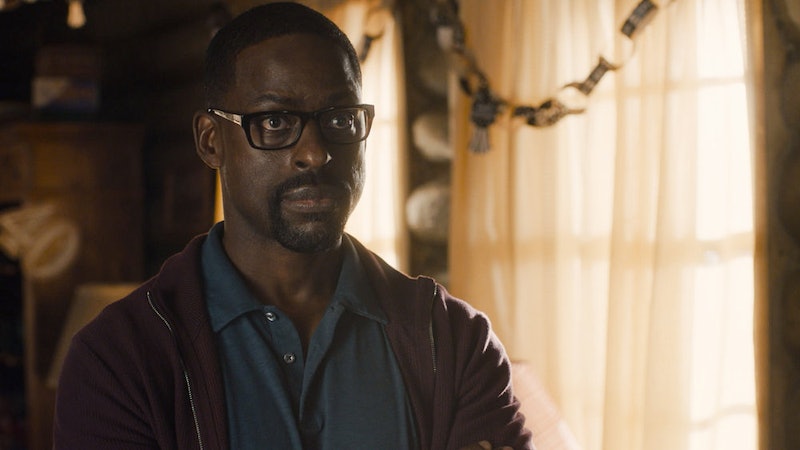 Spoilers ahead for the This Is Us Season 5 premiere. The end of the Season 5 This Is Us premiere delivered what was possibly one of the most shocking moments of the series thus far. Contrary to what everyone (especially Randall) has believed this whole time, Randall's birth mom didn't die when he was born. The closing moments of the episode showed that paramedics were actually able to help revive her after her accidental overdose. Now fans have a theory that Randall's new therapist will be his mom.

Just because his mom Laurel survived in the '80s doesn't necessarily mean she's still alive now, but it wouldn't make much sense for the show to reveal that she lived only to kill her off before she and Randall ever meet. There are a lot of questions now about whether Randall's father William knew that Laurel survived. He lived in the same apartment building his whole life, and he had to have returned at some point.

But since Laurel almost overdosed, perhaps she was taken by the paramedics to recover somewhere. By the time she got back and learned that William had left their son at a fire station, perhaps she was too upset to continue her relationship with William, and he could have kept that secret from Randall out of guilt or shame. Or maybe the paramedics told her that William took the baby and fled while she was seemingly dead and Laurel was too hurt and upset to return home after recovering.

"The first half of the season will give all the answers," showrunner Dan Fogelman told Entertainment Weekly about the big mom reveal. "A bigger question coming is ... what does that do for [Randall]? And how does that effect change — or not effect change — in his life?" The showrunner added that he thinks no one will be able to guess how Laurel might show up in the series. "It's just so specific that if somebody guessed, it would mean that they're a psychic," he said.

Well, several fans may just be psychic, because the therapist theory is compelling. Randall decided on Tuesday's episode that he wanted to find a Black therapist so he could more comfortably discuss some aspects of his life. We don't know yet who he might find, but fans are already thinking that if Randall's mother is still alive today, she may have chosen a career in psychotherapy. That would be a compelling storyline for her to only find out they're related through listening to Randall's story, and then perhaps struggling with whether or not it's the right thing to tell him her true identity.

However, if that's too obvious of a guess, one viewer has another theory: Perhaps Laurel went on to have other children and one of her grown up kids will be Randall's therapist and will recognize his birth story.

Bottom line, people think the therapist is connected to his mom somehow, but it's going to be at least two weeks until we get any more clues when This Is Us returns on Nov. 10. However, Fogelman said "it would be a concern for me as an audience member and to him as a character," that he find a new therapist quickly, so we could be seeing older Laurel pretty soon.