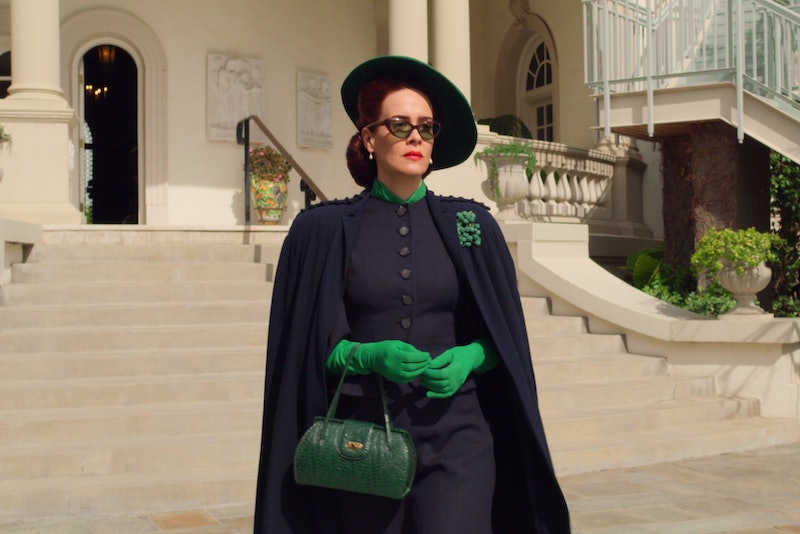 Spoilers ahead for Ratched Season 1. Ryan Murphy's new Netflix show, Ratched, follows the evolution of Nurse Mildred Ratched (Sarah Paulson) into the heartless psychiatric hospital leader from One Flew Over the Cuckoo's Nest. Except when we meet her, she's actually pretty likable. She certainly has a questionable moral compass — having committed several murders — but there are also times she's soft and kind to her patients. She kills out of pity, not evil. Season 2 of Ratched will likely bring her much closer to the infamous villain introduced in the original movie.

Ratched was granted a two-season order of 18 total episodes when it was initially green-lit. The first season is eight, which means a second 10-episode season is on its way. However, a longer lead time won't necessarily translate into a quicker premiere. Paulson told reporters at a press conference earlier this month that Season 2 hasn't begun production and may not for a while.

"Nobody knows anything about Season 2 because Ryan [Murphy], with the number of things he has going on, who's to know when that's all going to begin, and you throw in the [coronavirus] pandemic and then we think, 'Well who knows?'" Paulson said.

The film and TV industry has slowly started back up again in recent weeks, but Murphy does have a lot of projects to work on, and he can't do them all concurrently. He's starting filming on American Horror Story Season 10 in October, so that will likely be his focus in the short term. But Netflix shows usually air about a year apart anyway, so there's still time for Ratched to complete production for a fall 2021 premiere.

When Ratched does return, it has a lot of ground to cover. The first season ends with Edmund calling Mildred to inform her he's tracked her down and plans to kill her. Mildred threatens him right back, so Season 2 will probably be a bit of a cat-and-mouse game (spoiler: we already know that Mildred survives). Mildred also vows to find the person who ratted out her location to Edmund, and we learn that it was Nurse Bucket's friend Louise, who's on an ill-fated road trip with Edmund and Charlotte Wells. Meanwhile, Brandon Flynn's character Henry Osgood is set to be committed to an institution as stipulated in his mother's will. Who wants to bet he'll land at Lucia State Hospital?

Ratched's first season covers three years, from 1947 until 1950, so if Season 2 covers a similar timeline, there might be just enough room for a third season before the events of One Flew Over the Cuckoo's Nest. In the meantime, Paulson is looking forward to "actually just being Mildred Ratched again."

More like this
'Stranger Things' Season 5 Will Echo Season 1 In A Key Way, The Duffer Brothers Confirm
By Kadin Burnett and Sophie McEvoy
Does 'Locke & Key’s Ending Mean There Could Be A Season 4?
By Sophia Moore
‘Squid Game’ Creator Hwang Dong-Hyuk Just Dropped A Major Season 2 Tease
By Brian Anthony Hernandez and Bustle Editors
Everything To Know About Netflix’s 'Never Have I Ever' Season 4
By Jack Irvin and Gabrielle Bondi
Get Even More From Bustle — Sign Up For The Newsletter