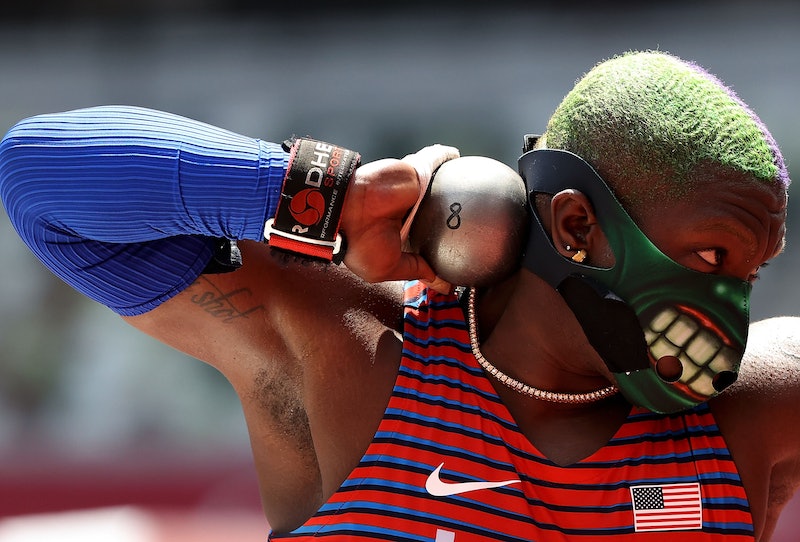 Shot putter Raven Saunders just won the silver medal for Team USA at the 2021 Tokyo Olympics on Aug. 1, but when it comes to winning the internet, the two-time Olympian is going for gold. The 25-year-old has been using her public platform online and offline, and people on Twitter are obsessed with her competitive spirt, standout fashion, and hilarious banter.

For example, Sunday’s breakout star athlete made a meme of herself, tweeting a photo from the Games with the caption, “When you defeat all the other masc lesbians. This is the final boss!!!” The post has already racked up more than 35,000 Twitter likes in just 20 hours, with fans quote tweeting it with comments like, “This is iconic, and Raven is now officially my masc lesbian hometown hero,” “I love this woman,” and “Raven Saunders my new favorite Olympic athlete.”

Saunders's Hulk green superhero mask and neon-colored hair are not the only reasons she has stood out in Tokyo. During the medal ceremony after she placed second, Saunders lifted her arms in an “X” formation above her head after stepping off the podium. When asked what that meant, she told The Associated Press, “It’s the intersection of where all people who are oppressed meet.” She went on to say, “Shout out to all my Black people. Shout out to all my LGBTQ community. Shout out to all my people dealing with mental health.”

At one point, she took to Twitter to reshare a post about her protest since some critics believed that the gesture could have been in violation of the Olympic charter, which added a rule against demonstrations in 1975. She tweeted jokingly, “Let them try and take this medal. I’m running across the border even though I can’t swim.”

The South Carolina native, who finished fifth in the same event at the 2016 Rio Olympics, also told reporters how important this win was for her, revealing that she had dealt with financial hardships and depression on her path to the Olympics. “Everything I've been through these past five years has been crazy,” Saunders said while getting choked up. “I remember so many times sitting in my car, crying not knowing how I was gonna pay my bills. Not knowing if I was going to be healthy, but I gave it everything I had.”

She also talked about how honored she felt to be an openly gay role model for the next generation. “I feel amazing, because I know I'm going to inspire so many people,” Saunders said. “I’m about to inspire so many young girls, so many young boys, so many LGBTQ people, people who have battled suicide. So many people would have almost given up ... it's not, it's not just about me.”

Here’s what other fans have tweeted about Saunders:

More like this
The 2023 Super Bowl Commercials Feature A 'Breaking Bad' Reunion & Missy Elliott
By Alyssa Lapid
David Beckham’s Controversial Qatar Deal Skyrocketed His Net Worth
By Catharina Cheung
'Breaking Bad' Duo Walt & Jesse Are Back — In This Super Bowl Commercial
By Jake Viswanath
Raven-Symoné Addressed Fan Pushback To Her Name's Actual Pronunciation
By Stephanie Topacio Long
Get Even More From Bustle — Sign Up For The Newsletter
From hair trends to relationship advice, our daily newsletter has everything you need to sound like a person who’s on TikTok, even if you aren’t.