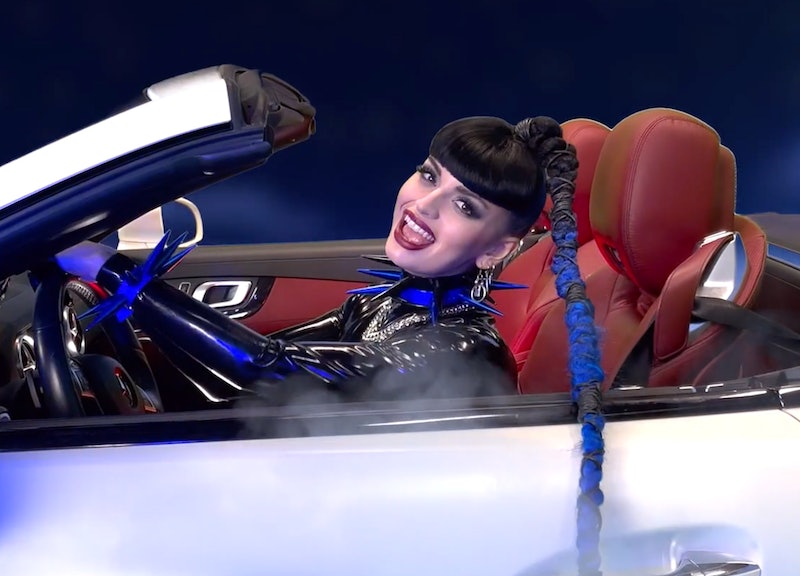 We first met Rebecca Black as a young teenager in 2011 when she uploaded "Friday" to YouTube. It went mega-viral, and the world ridiculed her for it. But ten years later, Black is 23, openly queer, and ready to be taken seriously as a musician. She's also grown to appreciate the song as the novelty hit it's become. For its tenth anniversary, Black dropped a hyperpop remix of "Friday," produced by 100 gecs' Dylan Brady and complete with features from Dorian Electra, 2010s noise pop duo 3OH!3, and the queen of bounce herself, Big Freedia.

The remix comes with a brand-new, surreal music video directed by Weston Allen that opens with the same animated calendar as in the original, but this time with a voiceover from Big Freedia laying out what's about to go down. "It's Rebecca Black, Dorian Electra, 3OH!3, and Big Freedia," she shouts. "It's the f*ckin' weekend, people. It's Friday!" As Black details her morning schedule in the first verse ("Gotta have my bowl / Gotta have cereal"), viewers get a glimpse into a bedroom fully decorated with photos of the singer from 2011 through today. Black then appears in a white sports car, donning a black latex bodysuit, fishnet tights, and an extra-long ponytail. Taking the place of her teenage pals from the original video are the badly-drawn "rage faces" of early internet meme culture.

With perfect timing, "Friday" was just certified Gold by the RIAA, and Black's framed plaque to celebrate the achievement sits comfortably in the passenger seat as she cruises through a city. She then drag races with camp king Dorian Electra, who performs the remix's second verse. This marks the pair's second collaboration following Electra's "Edgelord," a track that taps into the minds of keyboard warriors, like the ones who ridiculed Black as a teen. To fully transport you back to 2011, the members of 3OH!3 appear as a rocket ship and the literal moon to spit a few lines before Big Freedia takes over to instruct you to "let your freak flag fly" for the weekend.

As the video comes to a close, Black's sports car begins to hover as the travels the globe, causing viewers on the ground to stare up in awe at the internet icon. It's a hilarious, tongue-in-cheek take on the song's viral effect on the world a decade ago. Never forget: It garnered hundreds of millions of views and comments — both positive and very negative — from everyday YouTube viewers to celebrities including Justin Bieber and Katy Perry, who featured Black in her "Last Friday Night" music video.

According to the track's official press release, Big Freedia was quite excited to participate in it. “When they asked me to be on the remix, I was like yasss," said the New Orleans-born performer. "'Friday' defined an era and changed the music industry! It was a fun project.”

The remix of "Friday" comes just over a week after the release of Black's new single "Girlfriend," three minutes of openly queer pop perfection and her first release since coming out in April 2020. She recently spoke to Bustle about coming to terms with "Friday," recovering from the backlash she received as a teen, and making music she loves going forward.

“I remember so many specific moments of being on a phone call, and someone being like, ‘Happy Friday,’ and me feeling fully attacked,” she said, detailing that years of work on her mental health allowed her to let go of the harsh comments people wrote about her. “I learned that the issue was not, ‘Oh, you did this really bad thing.’ It was all of the conclusions that I [came to about] that experience. Like, 'I’m not talented, I’m ugly, I’m a mess-up, I’m stupid.'”

On the topic of the "Friday" remix, she said at the time, “I am f*cking stoked, and it really is so special to me that everybody who was a part of it is just as gagged to be a part of it as I am."

More like this
Britney Spears Shares & Deletes Photos Of Justin Timberlake From 22 Years Ago
By Jake Viswanath
'Friends' Star Maggie Wheeler Offers Support To Matthew Perry After Reading His Memoir
By Alyssa Lapid
Ariana Grande & Kristin Chenoweth Sing A Wizard Of Oz Classic On TikTok
By Alyssa Lapid
Beyoncé & Blue Ivy Performed A "Brown Skin Girl" Duet At Her Private Dubai Concert
By Brad Witter
Get Even More From Bustle — Sign Up For The Newsletter
From hair trends to relationship advice, our daily newsletter has everything you need to sound like a person who’s on TikTok, even if you aren’t.