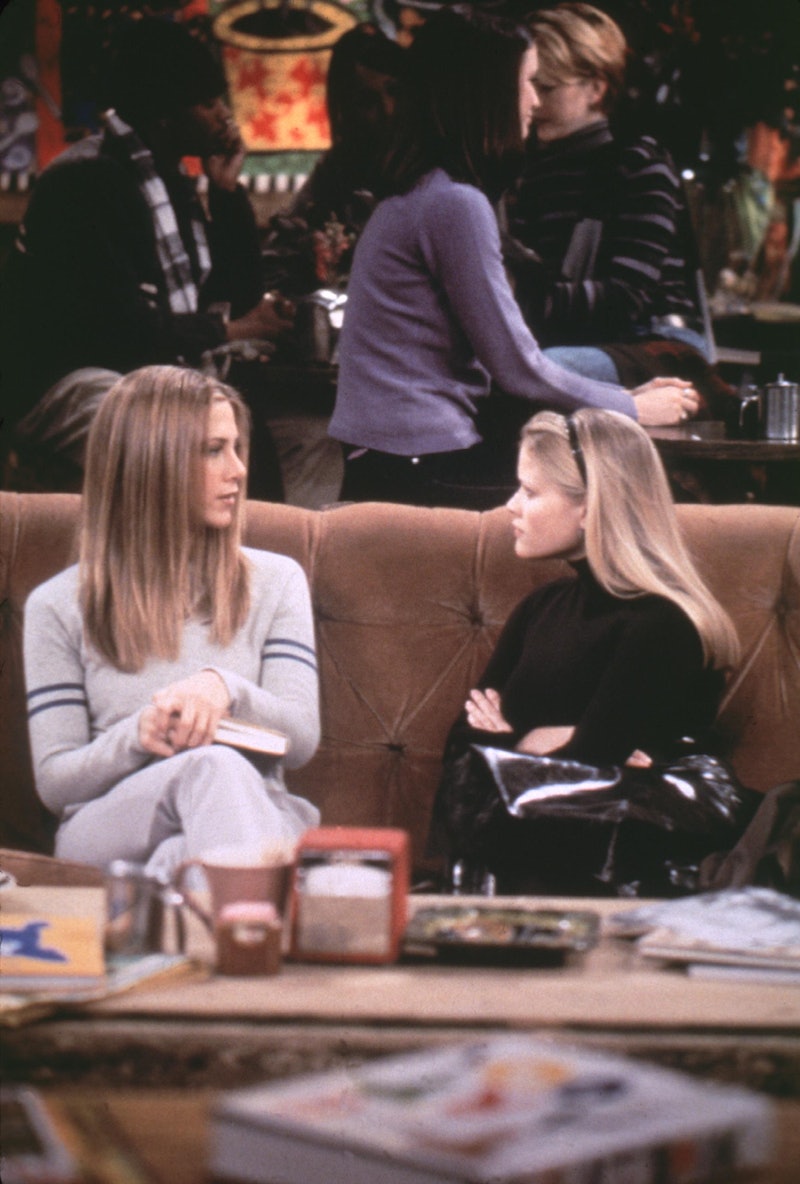 Call it the one where the Green sisters reunite. Before they were co-stars on The Morning Show, Reese Witherspoon and Jennifer Aniston played siblings Jill and Rachel Green on Friends. Revisiting the roles, the duo recreated one of their favorite scenes from a Season 6 episode of the beloved sitcom for Access Hollywood in 2019. After the clip recently resurfaced, Witherspoon took the opportunity to share it with her 28.2 million Instagram followers on Aug. 25.

To set the scene, Witherspoon guested as Jill twice in 2000, and in her second appearance, she had a brief fling with Rachel’s then-ex-boyfriend, David Schwimmer’s Ross Geller. (Were they “on a break”?) When Access Hollywood host Scott Evans showed the pair a photo of the scene partners on the iconic Central Perk couch, Witherspoon was transported back to that day. “Oh that’s sweet,” she said while looking at the still, before Aniston chimed in to ask, “Is this where you say the line that you love so much?”

Though Aniston needed an assist remembering her line, which she recited as, “You can’t have Ross,” Witherspoon didn’t miss a beat — even two decades later. “Can’t have? Can’t have?!” she said, stepping back into Jill’s shoes. “The only thing I can’t have is dairy.” (As People pointed out, Rachel’s actual line in the episode titled “The One Where Chandler Can’t Cry” was: “This is not about me being jealous of you, this is about you being a brat and wanting what you can’t have.”)

If it wasn’t clear from her impressive memory, Witherspoon captioned her Instagram post, “This line gets me every time,” adding both cheese and tears of joy emojis.

Witherspoon previously recalled meeting Aniston on the Friends set in a 2019 Harper’s Bazaar interview with Natalie Portman, sharing that the actor was “so sweet” to her. “I was really nervous, and she was like, ‘Oh, my gosh — don’t worry about it!’” recalled Witherspoon, who, at the time, had just welcomed daughter Ava Phillippe, who’s now 22 years old. “I marveled at her ability to perform in front of a live audience like that with no nerves. They would change all the lines and she was just so effortlessly affable, bubbly, and sunny. ... We’ve been friends ever since.”

In fact, filming in front of a live audience is ultimately why Jill’s second Friends episode was also her last, as she explained to Aniston and the Associated Press in 2019. “Did you know [Friends] asked me back and I said, ‘I can’t do it’? I got... I was too scared,” she said, much to Aniston’s dismay. “They asked me to come back and I was like, ‘I’m too nervous.’”

Even so, the women later reunited for Apple TV+’s The Morning Show, which recently began production on Season 3. Much like their first time working together, their characters also, at times, go toe to toe. For Aniston, their tight offscreen bond makes the sparring matches all the more amusing, though.

“It’s always fun to fight with Reese because she’s such a sweet burst of sunshine that she’s, you know, not someone you want to go scream your head off to,” she joked on Jimmy Kimmel Live! in September 2021. “And I usually always end up bursting into laughter at some point. It’s just too hard to be that mad with each other. But we do it.”

More like this
Reese Witherspoon Confirms This Fan Favorite Will Return For 'Legally Blonde 3'
By Jake Viswanath
Ashton Kutcher Wants Danny Masterson “To Be Found Innocent” In Rape Retrial
By Jake Viswanath
At 28, Debra Jo Rupp Was Living A Much Different '70s Show
By Grace Wehniainen
The Banned 'Friends' Ad Shows Monica As You’ve Never Seen Her Before
By Sam Ramsden
Get Even More From Bustle — Sign Up For The Newsletter
From hair trends to relationship advice, our daily newsletter has everything you need to sound like a person who’s on TikTok, even if you aren’t.