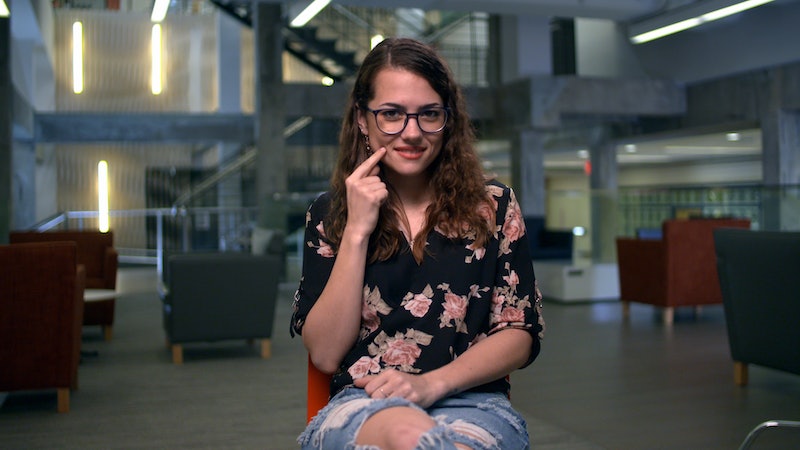 When viewers first meet Deaf U star Renate Rose in the trailer for the Netflix reality show about deaf and hard-of-hearing students at Gallaudet University, she's raving about the women on campus. "Gallaudet's undergrads are 700 women and 300 guys," she says. "And the women here are just wow!" Rose, who identifies as pansexual according to the Kansas City Star, had the numbers in her favor when it came to dating at Gallaudet. However, she was in a committed relationship throughout filming, and Rose and her girlfriend Tayla are still together a year after the series stopped taping.

"When people say their partners complete them, I rolled my eyes until I met you. You really do complete me in many ways I never realized was possible," Rose wrote in a Valentine's Day Instagram caption. In early August she posted another photo of them and captioned it simply, "I love you." That was her last post featuring Tayla on her timeline, but the Kansas City Star reported in October that they are still dating.

Rose is open in the series about some of the large and small struggles that being deaf can bring in a relationship, like not being able to cuddle and sign at the same time.

It's one of several "deaf people problems" that Rose and her co-stars shed light on in the series, which seeks to help educate the hearing community while also examining how different things can be even within the Deaf and hard-of-hearing community.

Growing up in a deaf family and going to deaf schools, Rose told the Kansas City Star that she knows she has a privileged background compared to some of the other deaf and hard-of-hearing students at Gallaudet. It's part of why she wanted to participate in the series, she said during a virtual Netflix panel, according to Ten15AM. "I wanted to take this opportunity to show what I had to offer to the world, to show… my own journey as to what I've experienced," Rose said, adding that seeing the Deaf and hard-of-hearing experience on mainstream television will be a big deal for a community that doesn't get a lot of representation.

The Kansas City Star reported that Rose graduated Gallaudet in May. On Instagram, she revealed the next big step for her life: grad school. She wrote that she'd originally planned to travel following her Gallaudet graduation, but COVID-19 changed that.

After school, she told the Kansas City Star that she wants to move home to Kansas and give back to the Deaf community, particularly the youth. But with Deaf U, she's already begun to do so.