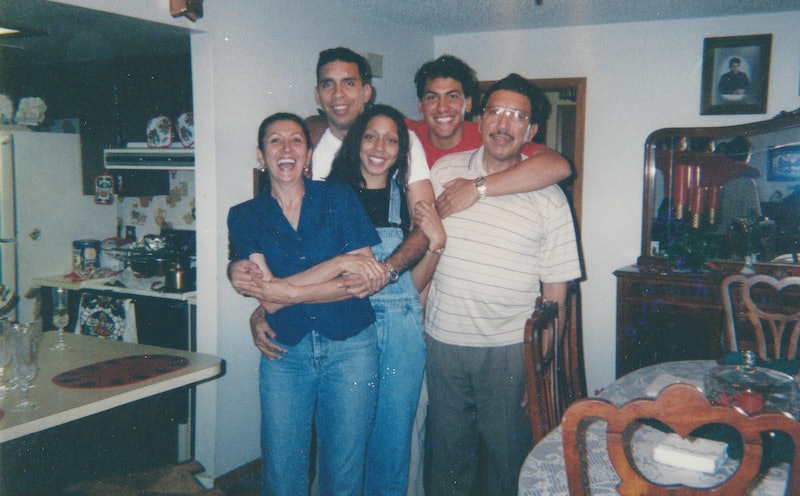 The first episode of Netflix's Unsolved Mysteries reboot centers around the mysterious death of Rey Rivera, who seemingly fell through the roof of Baltimore's Belvedere Hotel in May 2006 after receiving a phone call and rushing out of his house. There are elements of his death that don't quite add up, like the fact that his phone and glasses somehow remained intact, and in trying to piece together what happened, Rivera's family discovered a puzzling note taped to the back of his computer. Internet sleuths have since put forth several theories about Rivera's note and how it could tie in.

According to WBAL-TV, the letter was typed in a tiny font (which viewers can see for themselves in the Google Drive of evidence that Netflix has shared). In the episode, Rivera's wife, Allison, says that she knows her husband wrote the note the day he went missing "because there were scraps in the trash can."

The exact wording of the letter is difficult to read due to its small font size, so Redditor Zestyclose_Run850 transcribed the text in full. The results are, predictably, cryptic. Former police Commander Mel Blizzard told WBAL that Rivera's note "appear[s] to be a weird stream of conscious writing," adding that he may have been writing "in some type of code to someone about something."

Here's what Redditors have theorized.

1. It's Connected To The Freemasons

Per WBAL-TV, Rivera had been interested in the Masonic order before his disappearance, reading several books on the topic and even meeting with a member. Some of his verbiage in the note appears to be a reference to Freemasonry — most notably his opening phrase, "Whom virtue unites, death will not separate." He also listed a number of shows, movies, and books as well as a long list of family members and celebrities he wanted to make "five years younger."

As such, Redditor GoldenR16180 postulated that Rivera may have written the note because Freemasons are not supposed to share their organization's secrets. His audience is "the Freemasons, and the quotes, movies and names all are nods to the secret traditions of the Masons," the user theorized. They even had an explanation for the blank check found with the letter, guessing that it was meant for Rivera's initiation fee.

Redditor sammyfearless had a similar theory, guessing that Rivera was writing a speech (though not necessarily one meant for the Freemasons). "The writing is stylized in a way that makes more sense and seems more lucid when spoken," they wrote in part. "The opening is very dramatic, much like how you would give a speech. The ending is also dramatic and seems to invite applause from an audience."

3. Rivera Was Acting Out The Movie The Game

Among the movies Rivera mentions in his note is David Fincher's The Game, which follows a banker named Nicholas Van Orton (Michael Douglas) who eventually jumps off the roof of a building after getting embroiled in an elaborate scheme. Redditor zumalightblue theorized that Rivera was acting out the movie, but Unsolved Mysteries co-creator Terry Dunn Meurer shut that idea down during an interview with Entertainment Weekly. Meurer explained that she'd talked with Rivera's wife, Allison — who has spent ample time analyzing the note — about the theory, and she couldn't find a deeper connection. "Rey liked a lot of different types of movies. He was just a guy who was interested in everything," Meurer said. "If he had only ever left just that writing or if it was the only thing he had ever written randomly, then people would be a little bit more suspect."

Considering the meandering nature of Rivera's note, several viewers have theorized that he lived with mental illness. Unsolved Mysteries fan hoursvary guessed that Rivera had something called Truman Show Delusion, which Psychology Today explains is when people believe they are in a TV show-like scenario. Others have hypothesized that Rivera died by suicide after a psychotic break. However, the police told WBAL-TV that Rivera had no history of mental illness, and Rivera's wife doesn't believe it was suicide, either.

"[Allison] believes if he was going to [die by suicide], he would have left a note for [her] and for the family explaining why and what was going on," Meurer told Nerdist. "It's rare that somebody that [dies by] suicide doesn't leave a note or people didn’t see it coming... She also said, 'Because Rey was a writer, he would have left a beautiful note.'"

5. Rivera's Note Was in Code

Redditor quartzlizard theorized that the entire note was actually written to spell out the world "HELP," while others put forth the idea that it's written in a code like Gematria. Vrontasaurus wasn't convinced, however, writing in a Google Doc that there are too many meanings when you plug phrases into an online Gematria decoder like gematrix.org. "I'm not saying that Rey *didn't* encode all or parts of the note in Gematria, but I think this is an unhelpful avenue to explore without having further information," the user wrote in part.

6. It's the Start of a Screenplay

Rivera was an aspiring screenwriter, and some viewers have guessed that his note was actually the beginning of a script — something called a tone or mood reel. Meurer told Nerdist that Allison also believes this might be the case and that her late husband was doing research for a screenplay.

Perhaps this cryptic paper wasn't related to Rivera's death at all and was simply his innocuous ramblings. Reddit user e6r6i6c posited that it was a list of passwords, while Lostscribe007 theorized that it was "just a loose collection of notes and nothing more.... Rey didn't know he was going to die the night he was killed or I'm sure if he was going to leave a note with details it wouldn't have been cryptic and confusing."

Ultimately, Meurer doesn't think it's worth speculating about. "Allison, who knew Rey and knows that note better than anyone, said to me, 'I know where each of those pieces of that note comes from. What I don't understand is why they're all put together in this letter form,'" she told Nerdist. "So if Allison can't figure it out, and the FBI can't figure it out, I wouldn't even venture a guess."