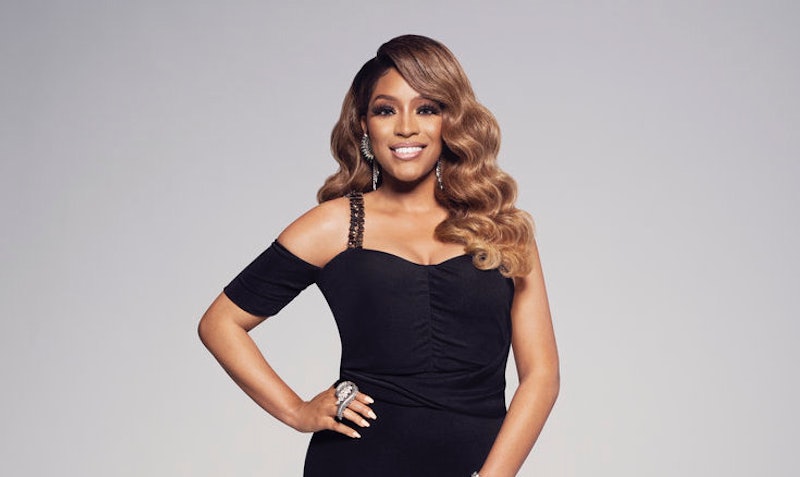 There's a new star on Real Housewives of Atlanta: Drew Sidora. The multi-hyphenate was already pretty famous before she joined RHOA, thanks to her career as a TV and film actor. She's also an entrepreneur, singer, and philanthropist, and a mother to three kids, per her Bravo bio. Here's everything you need to know about the newest face on RHOA.

As her bio hinted, she does a little bit of everything. Drew's been acting since 1995, appearing in projects like That's So Raven, White Chicks, and Step Up. She's also a singer, and you can find her music on Spotify. According to her Bravo bio, she also founded a charity called DREAMMAKERS to support and advocate for young women. She and her husband are also co-collaborators on My Mind Music for Kids, which puts together playlists to help children sleep better.

Now she can add full-time RHOA star to her already lengthy résumé.

Drew and Ralph have been married for over six years, but they had a little bit of marital drama heading into the RHOA season that viewers will see play out. According to Us Weekly, Drew said her husband left for three days right before filming began. "I truly didn't know where he was," Drew told the magazine. She added that when he returned, the ensuing quarantine for the pandemic added extra stress. Now the duo is in marriage counseling to work through some of their concerns. "[We're] dedicated to our marriage," she said.

In September, she hinted at some of the strife on Instagram. "Marriages are not perfect, but I have the perfect man from God to lean on," she wrote.

In addition to working with Drew on their sleep music, Ralph also founded My Mind Music, which curates therapeutic songs for adults as well. He's a composer and producer who also works as a client executive for the business research and advisory company Gartner.

Her social media is just as varied as her résumé. She shares a lot of family photos of her husband and their three children.

She also often updates her fans about the various projects she's working on. Over the summer, she shared her health struggles as she underwent a second surgery to repair her Achilles tendon.

She's pretty open with her life on social media, so fans will want to follow along in case she drops any hints about RHOA or gives any reactions to the drama as the season unfolds.