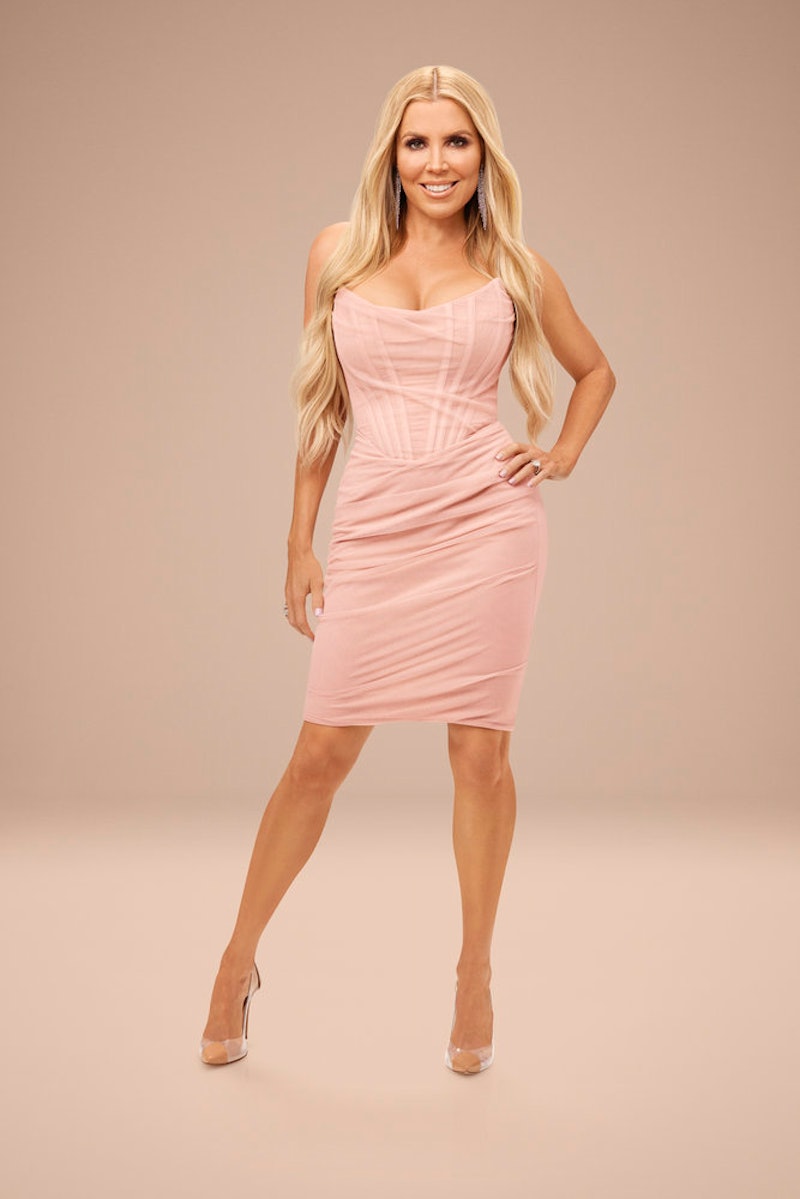 New housewife Dr. Jen Armstong is giving The Real Housewives of Orange County a facelift for Season 16. According to her Bravo bio, the 44-year-old aesthetic MD joined the cast after meeting costars Gina Kirschenheiter and Emily Simpson last year. Though emotionally guarded at first, she “immediately integrates into the group by performing cosmetic procedures on the ladies” and develops a “quick bond” with returning cast member Heather Dubrow. However, things don’t go quite as smoothly with fellow RHOC newbie Noella Bergener.

From her always-shirtless husband to her enviable Instagram, here’s everything to know about the new Housewife.

As the CEO of Advanced Skincare Dermatology and Plastic Surgery, Jen specializes in injectables, lasers, and other non-invasive treatments to help patients achieve hair growth and anti-aging effects. She graduated from Georgetown University with a master’s degree in biophysics and physiology and later earned her Doctorate of Medicine from the John A. Burns School of Medicine at the University of Hawaii. She then attended a residency program at University of California, Los Angeles. Throughout her career, Jen has published over 20 academic articles, written chapters of books on dermatology, and received two international awards in laser technology, per her website.

Jen is also now launching Armstrong Mind, a division of her practice that specializes in a unique magnetic brain treatment called Transcranial Magnetic Stimulation (TMS). The Armstrong Mind website describes TMS as a “drug-free, non-invasive treatment therapy that uses magnetic pulses to stimulate activity in neurons,” noting that the FDA has cleared several TMS medical devices for use in treating major depressive disorder, obsessive-compulsive disorder, and migraines. The outpatient therapy is billed as an alternative to medication.

In the RHOC Season 16 trailer, Jen jokes that her husband Ryne Holliday “never wears a shirt” — but he does put one on occasionally for his job. Ryne is the president of Hawaii Hideaways, a Newport Beach-based luxury property rental and specialty vacation planning company geared toward small businesses. In 2018, Conde Nast Traveler named him a top trusted Hawaiian travel specialist.

“Ever since I visited Hawaii as a teenager, I knew I would live there for the rest of my life,” the Illinois native wrote on his company’s website. “When I was offered the opportunity to play basketball at the University of Hawaii, I quickly moved to the island of Oahu and now more than 20 years later, I have not left.”

The couple obviously now lives in Orange County — where Jen’s practice is based — but they still seem to spend plenty of time in Hawaii. Together, they have three children, including 6-year-old daughter Cece Holliday, who runs a puppy sitters club for dogs under 10 pounds. Cece’s Instagram account also showcases several of her paintings, including those of animals, beaches, a Chanel perfume bottle, and even a cat sipping iced coffee through a straw.

Though Jen’s Instagram bio states that she does not give medical advice on social media, her page includes plenty of tutorials, tips, and before-and-after shots of satisfied patients. Among the people she’s treated is her RHOC costar Emily, who came to her looking for some advice about fillers. “I explained that sometimes people put too much #filler in their #face which can actually age them and make them look heavier,” Jen wrote in a July 28 post, describing how she dissolved Emily’s filler “to bring back her natural features.”

In 2014, the New York Post reported that Jen’s billionaire ex-boyfriend Bruce Elieff was suing her for $850,000. The fraud lawsuit, which Elieff filed in Orange County, claimed that Jen had borrowed money from him when she was a 34-year-old medical student to pay for her $160,000 tuition at the University of Hawaii, $10,000 in monthly expenses, $160,000 for cancer treatments, and $37,000 to freeze her eggs. Per the court documents, the couple’s relationship began in 2009 and ended in 2013 after Jen gave birth to twins who were fathered by another man. Elieff even accused his ex of “faking life-threatening cancer” to get money from him.

Jen countered that the lawsuit was a “last-ditch effort to continue controlling [her] life,” describing her ex as “controlling, possessive, and very jealous.” She called his allegations that she’d borrowed money “completely baseless” because “everything that he gave to me was a gift ... no strings attached.” She claimed that in addition to covering her bills, Elieff gifted her expensive jewelry, a new Range Rover, stacks of cash, and credit cards with no limits. Though she admitted to straying from the relationship “during a brief period of time that we had broken up,” Jen added in court documents that she was convinced Elieff “was sleeping with a number of women” other than her during their relationship. The former couple eventually reached a confidential settlement in 2016.

Prior to her RHOC casting, a judge reportedly ordered Jen to pay $60,000 for failing to pay a company she’d leased medical equipment from, according to Radar Online. In July 2021, the website also obtained court documents from an ongoing civil lawsuit in which a woman accused Jen of medical negligence, battery, and failure to obtain informed consent for filler treatment she received in her cheeks. The former patient claimed that Jen misdiagnosed her condition, provided unnecessary treatments, failed to properly inject the fillers, and caused irreparable damage to her face. Jen has yet to respond to the case in court.