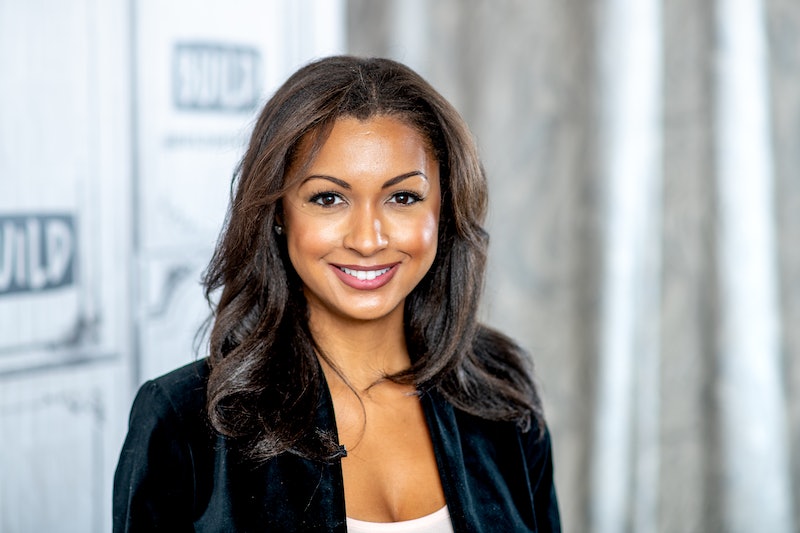 History is happening in New York City, courtesy of Bravo's newest housewife. On Tuesday, Oct. 8, the network announced that attorney and TV host Eboni K Williams will become the first Black cast member to join The Real Housewives of New York. The casting decision comes shortly after two other cast members — Dorinda Medley and Tinsley Mortimer — left the reality show ahead of Season 13. According to TMZ, Bravo has been looking to bring diverse housewives onto RHONY for some time, and the dual exits offered up the perfect opportunity to cast a wider net.

"NYC is filled with successful and dynamic Black women. I'm excited to join this legendary franchise as the first Black housewife," Williams said in a statement to Entertainment Tonight. "[I] can't wait to share a slice of life in this city that hasn't been seen before. Anyone who's aware of my work knows I don't hold back. I'm going to keep it just as real here as I do everywhere else." Williams repeated her promise to "keep it real" on RHONY in an Instagram post. "Y’all, Bravo messed around and gave your girl an [apple]," she wrote, before teasing that her addition to the show means that "things just got EXTREMELY interesting."

Despite being a new addition to the franchise, Williams already has an impressive resume as both a lawyer specializing in family law and civil litigation and as a TV host and anchor at Fox News. In 2017, Williams wrote the book Pretty Powerful: Appearance, Substance, and Success, which seeks to encourage women to use their beauty and appearance as an asset in the business world. Since leaving Fox News in 2018, she has worked as a host and executive producer on Revolt's Black News.

Williams will join current cast members Luann de Lesseps, Ramona Singer, Leah McSweeney, and Sonja Morgan on Season 13. While the other Housewives haven't yet commented on Williams' casting, they have previously expressed a desire to see more diverse women represented on RHONY. Back in August, McSweeney told Page Six that going forward, she wanted to see women from all walks of life be considered as cast members. "I hope that there’s not only diversity of race, but an even deeper diversity of where someone lives or what their interests are," she said. "I hope that there’s just more diversity all across the board because New Yorkers are not a monolith, obviously. I think that it is gonna head in that direction."

A month later, former cast member Bethenny Frankel revealed during a conversation with Andy Cohen on Watch What Happens Live that she has recommended "several African American women" to producers, in the hopes of having them cast on the series. She echoed those sentiments on Twitter after a fan thanked her for advocating for Black women to be cast on RHONY. "For years, I have submitted black women," Frankel, who left the show for a second time in 2019, claimed. "We live in NY. This isn’t a new or innovative concept. It’s truth."

Following the cast's comments calling for diversity, TMZ reported in September that Bravo was considering motivational Bershan Shaw as a potential new addition to RHONY. A source close to production told the outlet that Shaw had been filming scenes with "some of the cast," but that producers hadn't decided if she would be a permanent addition, or if she would be introduced as a "friend of the show." Thus far, Shaw has not been officially cast in any capacity, and it's unclear whether or not she will be featured on the upcoming season.

Williams is the second Black woman to join a primarily white Housewives cast over the past year. In August 2019, Bravo announced that Garcelle Beauvais would join the cast of The Real Housewives of Beverly Hills — which was otherwise made up entirely of white women — ahead of Season 10. "I wish we had more meaningful conversations [about race] ... so, I'm hoping that'll change maybe next season," the actor told ET in August of her experience on the show. "I think I felt definite pressure not only to represent, but also I wanted to make sure that I was representing me and not representing what people think the idea of a Black woman is."

More like this
Everything To Know About 'RHOSLC' Season 4
By Jake Viswanath
'RHOSLC’s Heather & Whitney Are Still On A “Friendship Break” After Season 3 Reunion
By Jake Viswanath
RHOP’s Robyn Dixon Explained Why Juan Paid For Another Woman's Hotel Room
By Brad Witter
Everything To Know About 'The Real Housewives Ultimate Girls Trip' Season 4
By Jake Viswanath
Get Even More From Bustle — Sign Up For The Newsletter
From hair trends to relationship advice, our daily newsletter has everything you need to sound like a person who’s on TikTok, even if you aren’t.