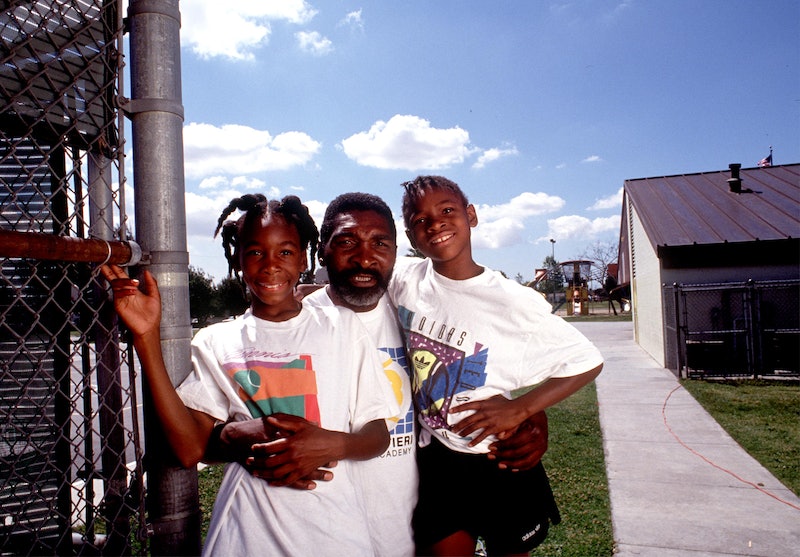 Venus and Serena Williams are two of the greatest tennis stars of all time, and much of their success can be attributed to their father (and amateur coach), Richard Williams. The sisters’ professional and personal relationship with Richard is the subject of the newly-released film King Richard, which stars Will Smith as the titular “king.”

Hailed by the New Yorker as “the world’s most successful tennis dad,” Williams began training his daughters when they were 4 years old. His top priority was ensuring Venus and Serena’s success, and his dedication paid off — starting when Serena won the US Open in 1999, and in 2000, when Venus did the same at Wimbledon. Since then, the Williams sisters have garnered 30 Grand Slam titles individually, 14 Grand Slams together as doubles partners, and three Olympic gold medals.

King Richard, directed by Reinaldo Marcus Green, focuses primarily on the unorthodox coaching methods Williams used to train his daughters. He was also known to act as their advocate: in a famous interview with Venus, who was just 14 at the time, Williams angrily interjected when the reporter second-guessed his daughter’s confidence. Smith says that interview inspired him to take the role — and made him want to be a better dad.

However, Venus and Serena aren’t Williams’ only kids. He has several children from a previous marriage, as well as a son with his third wife, Lakeisha Graham. Below, what to know about Williams’ children.

Williams was laser-focused on coaching Venus and Serena.

In a recent interview with People, Serena opened up about how their mother, Oracene Price, financially supported the family while their father trained them on the court. Serena recalled him saying, “This is what we’re going to do. I’m not going to have a job. I’m gonna go with Venus and Serena, and train them every day.”

Though their father gave them the tools to thrive as athletes, Serena says she and her sister would have never succeeded without their mother. “[Our mom] had to support seven people, as a family of seven,” Serena told People. “To have that faith and to have that back end support, we wouldn't have survived without that.”

Serena grew up in blended family with her parents, her sister Venus, and her three half-sisters — Yetunde, Isha, and Lyndrea — whom her mother had during a previous marriage. Serena and Venus are still close with Isha and Lyndrea; Yetunde died tragically in 2003.

Williams was far less involved in his other children’s lives.

Before Venus and Serena were born, Williams had children with his first wife, Betty Johnson. He and Johnson divorced in 1973.

Sabrina, Williams’ eldest child with Johnson, told The Sun in 2020 about her strained relationship with her father. She described him as a “serial cheater” and alleged that Williams’ has a potential total of “15 to 19 [children] all over the place.” Sabrina also claimed that when she was 8 years old, her father left the house, saying he was buying her a bicycle, and never returned. The family struggled financially for many years.

“My mom told me later that he’s never coming back. We went from having everything to nothing,” Sabrina told The Sun. “I thought I was dad’s favorite and he loved me to death … But once he left, within a year, we became very poor. There wasn’t always meals on the table. We went downhill. My mom became stressed out with six kids, trying to provide for us, she became aggressive.” Sabrina’s mother passed away in December 1998.

Very little is known about Williams’ other children.

There isn’t much information publicly available about Williams’ children with Johnson besides their names: Sabrina, Richard III, Ronner, Reluss, and Reneeka. According to The Telegraph, Williams also has a son named Chavoita LeSane. At one point, after Williams suffered a stroke that limited his speech, LeSane acted as his father’s power of attorney and translator. LeSane is also the CEO of his own media production company.

In 2012, Williams had a son, Dylan Starr Richard Williams, with his third wife, Lakeisha Graham. The couple divorced in 2017.