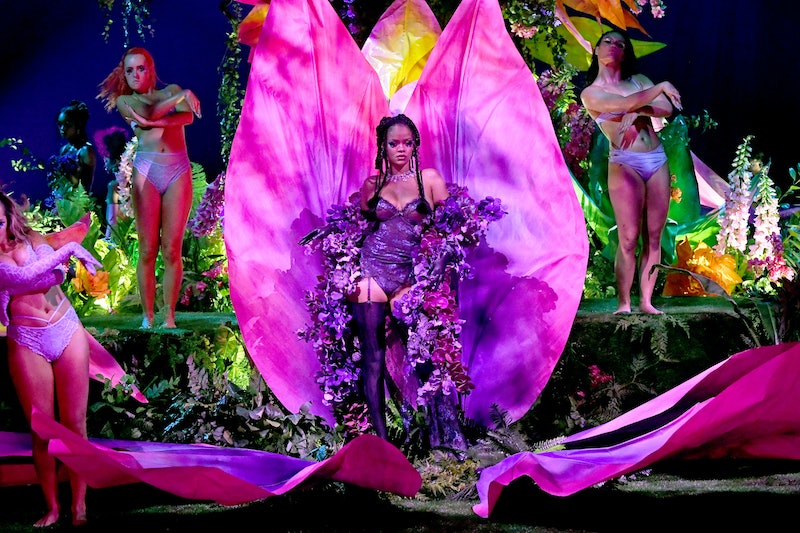 Rihanna's second Savage X Fenty show, released on Amazon Prime on Oct. 2, was one of the most inclusive mainstream fashion shows. But even the most well-intentioned efforts can come with some mistakes. And the singer and fashion designer isn't afraid to admit when she's misstepped. After seeing that the use of the song "Doom" in the show upset some viewers, Rihanna apologized to the Muslim community, calling the inclusion of the song a "careless mistake."

"Doom" by producer Coucou Chloe, played during the final section of the show and immediately sparked backlash among many Muslim viewers. The track was originally released in 2017 and uses a remix of a Hadith scripture about judgment day. (The Hadith, a collection of traditions and sayings from the Prophet Muhammad, is extremely sacred in the Muslim religion and comes second only to the Quran in terms of religious texts.) Following the premiere of Savage X Fenty's 2020 show, many Muslim viewers took to social media to voice their upset, with some accusing Rihanna of "disrespecting Muslim culture". On Tuesday, Oct. 6, Rihanna took to her Instagram Story to apologize for the song usage and thank the Muslim community for pointing out the "huge oversight" in her show. "I would more importantly like to apologize to you for this honest, yet careless mistake," she wrote.

She went on to acknowledge that her Muslim fans felt hurt by the "unintentionally offensive" mishap. "I'm incredibly disheartened by this!," she wrote. "I do not play with any kind of disrespect toward God or any religion and therefore the use of the song in our project was completely irresponsible!" She ended her statement with a promise to do everything in her power to ensure this type of thing never happens again. "Thank you for your forgiveness and understanding," she concluded.

Coucou Chloe also apologized for using the Hadith for the song in a Twitter statement, explaining that she used samples from Baile Funk tracks she found online and wasn't aware that the Hadith was used in the song. "I want to deeply apologize for the offense caused by the vocal samples used in my song ‘DOOM'," she wrote on Monday, Oct. 5. "I take full responsibility for the fact I did not research these words properly and want to thank those of you who have taken the time to explain this to me." The producer added that she was in the process of getting the song removed from streaming services.

More like this
Kanye West Apologizes To Kim K "For Any Stress I Have Caused" In Rare Interview
By Jake Viswanath
Everything To Know About Taylor Swift’s 10th Studio Album, 'Midnights'
By Grace Wehniainen and Jake Viswanath
How Ghosts Inspired Kesha’s New Music
By Jake Viswanath
Beyoncé’s Special Tribute To Sister Solange Was Both Touching & Hilarious
By Stephanie Topacio Long
Get Even More From Bustle — Sign Up For The Newsletter