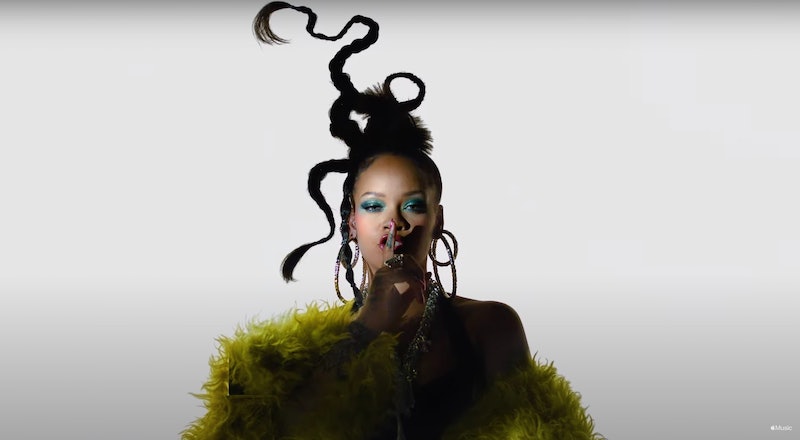 The wait is almost over. On Jan. 13, Rihanna released an Apple Music trailer for her Super Bowl LVII Halftime Show. The Feb. 12 halftime show at State Farm Stadium in Arizona will mark her first performance in five years — and Riri is making it clear that the wait was worth it.

In the 30-second teaser, the chatter of fans and reporters begging for a new album plays as Rihanna walks a white runway. “Dude, Rihanna we’ve waited for you,” one voice said, with another noting that “it’s been six years since the nine-time Grammy winner dropped an album.” Then, a spotlight shines on Rihanna and she motions for us all to shush as her 2016 hit “Needed Me” plays.

In addition to the trailer, to get fans ready for the big show, Riri released a Super Bowl-themed line for her Savage x Fenty brand. The capsule collection includes multi-colored football jerseys, hoodies and sweatpants emblazoned with “Property of Fenty,” and even an oversized T-shirt that reads, “RIHANNA CONCERT INTERRUPTED BY A FOOTBALL GAME WEIRD BUT WHATEVER.”

Rihanna revealed that she would headline the Super Bowl Halftime Show in September, making the announcement with a striking photo of her tattooed arm holding a football. Given how fans have been waiting for her ninth studio album since 2016, when she released Anti, many people thought her Super Bowl gig also meant her new album was on the horizon. However, Riri shut down that speculation, telling the Associated Press in November that the Super Bowl and new music were two separate events. “Do you hear that, fans?” she asked. “Because I knew, the second that I announced this I said, ‘Oh my God, they’re gonna think my album is coming, I need to get to work.’”

That said, Rihanna did release some non-album related new music in November, recording two songs for Black Panther: Wakanda Forever, “Lift Me Up” and “Born Again.” The former, written as a tribute to late Black Panther star Chadwick Boseman, was nominated at the Golden Globes for Best Original Song, losing to “Naatu Naatu” from RRR, and is on the shortlist to be recognized in the same category at the Oscars. If nominated, Rihanna could perform at the Super Bowl and the Oscars in the same year, joining Phil Collins and Lady Gaga as the only artists to make that achievement. That Rihanna reign just won’t let up.

More like this
The 2023 Super Bowl Commercials Feature A 'Breaking Bad' Reunion & Missy Elliott
By Alyssa Lapid
'Breaking Bad' Duo Walt & Jesse Are Back — In This Super Bowl Commercial
By Jake Viswanath
Twitter Is In Awe Of Taylor Swift’s “Lavender Haze” Music Video
By Jake Viswanath
Cruz Beckham Teased New Music With An Adorable Nod To Mom Victoria Beckham
By Stephanie Topacio Long
Get Even More From Bustle — Sign Up For The Newsletter
From hair trends to relationship advice, our daily newsletter has everything you need to sound like a person who’s on TikTok, even if you aren’t.