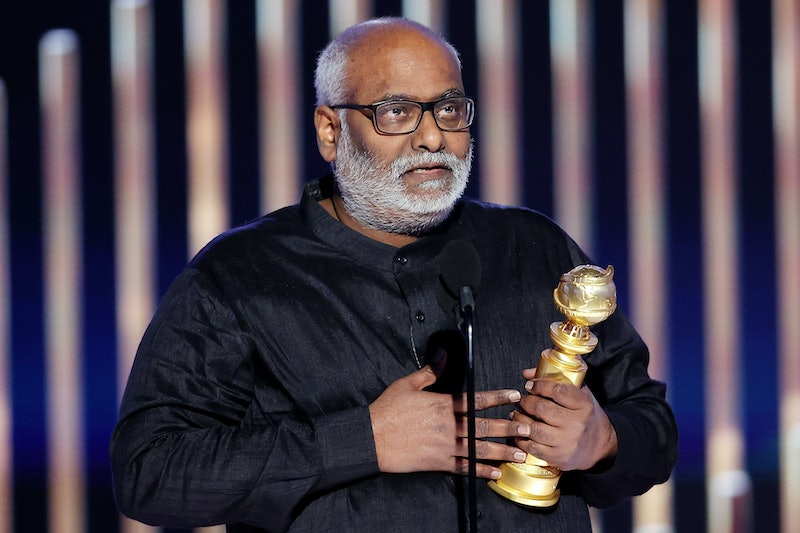 At the 2023 Golden Globes, “Naatu Naatu” from RRR was up against several formidable contenders in the category of Best Original Song, including Taylor Swift’s “Carolina” from Where the Crawdads Sing, Rihanna’s “Lift Me Up” from Black Panther: Wakanda Forever, and Lady Gaga’s “Hold My Hand” from Top Gun: Maverick. However, “Naatu Naatu” was ultimately able to bring home the honor at the Jan. 10 ceremony.

Composer M.M. Keeravaani took to the stage to accept the award. He said he planned not to follow the “age-old practice” of saying the award belongs to someone besides himself, but he wasn’t able to resist, crediting several people for the song’s success, including S. S. Rajamouli, his brother and RRR’s director.

“I did not guess there would be this kind of response for this song, even in my dreams,” Keeravani recently told Variety. “But as a paradoxical statement, it’s a dream coming true.” He’s not the only one pleasantly surprised by the success of “Naatu Naatu,” however. Variety writes that the tune was the underdog going into the 2023 Golden Globes race, and according to Pen Studios, the film’s distributor, it’s the first Asian song to ever take home the Golden Globe for Best Original Song.

Several viewers shared that they’d finally be watching RRR after its Golden Globe win. If you’re wondering where to stream RRR, that’s an easy one! The three-hour film is available on Netflix right now.

While the Golden Globe success of RRR may come as a surprise to fans who were rooting for Swift, Rihanna, or Lady Gaga, the Indian film has been a massive international success — and even included two theatrical releases in the United States. Distributor Dylan Marchetti of Variance Films told The New York Times that RRR has been a “gateway drug” for viewers otherwise unfamiliar with Indian cinema.

More like this
You’ll Definitely Recognise Isadóra Bjarkardóttir Barney’s Mum
By Maxine Harrison
Lisa Marie Presley's Secret Granddaughter Was Revealed At Her Funeral Out Of Nowhere
By Jake Viswanath
Twitter Is In Awe Of Taylor Swift’s “Lavender Haze” Music Video
By Jake Viswanath
Theo James Would “Love” To Star In George Michael Biopic
By Sam Ramsden
Get Even More From Bustle — Sign Up For The Newsletter
From hair trends to relationship advice, our daily newsletter has everything you need to sound like a person who’s on TikTok, even if you aren’t.