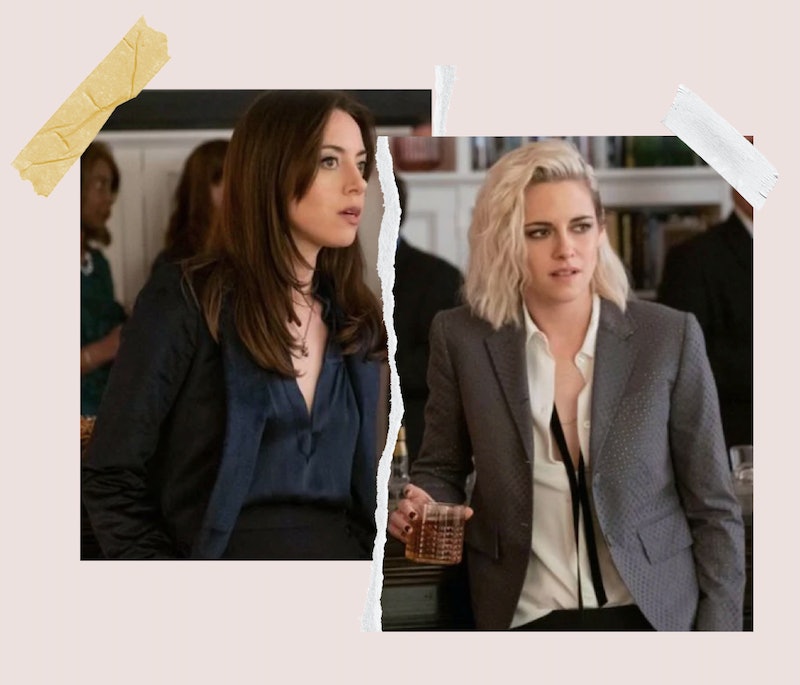 But unfortunately the film centers on a far inferior couple, Harpby. Happiest Season begins when Harper (Mackenzie Davis) invites her live-in girlfriend Abby (Kristen Stewart), who she has been dating for over a year, home for the holidays to meet her family. On the drive over, Harper reveals that her family doesn’t know she’s gay, or that they’re together, and then, um, asks Abby to retreat into the closet and slam the door shut for five days. Over the course of the week, Harper devolves into a toxic gay cretin, asking Abby to morph into a false version of herself in order to please Harper’s creepy family of white people who describe themselves as “overachievers.”

In Harper’s absence, Abby starts hanging out with local hot gay Riley (Aubrey Plaza), who reveals that Harper didn’t share the whole story about their relationship: Yes, Harper and Riley secretly (per Harper’s request) dated in high school, but when someone found out, Harper threw Riley to the wolves and said Riley was a lesbian who wouldn’t leave her alone, transitively ruining her life. Yes, just a Super Normal thing that any Normal Good Person would do — certainly not a signifier of Harper’s mutinous and undignified character (sorry! She is!).

If only Happiest Season centered around Riley and her pheromones rather than Harper and her wig, the movie would’ve been a whole lot less of a painful coming out story, and a whole lot more gratifying.

But this isn’t about H*rper. This is a love letter to Riley, who as everyone who watched this rom-com surely knows, Abby should have ended up with. Aubrey Plaza’s charisma as the power-bitch lesbian doctor with a sardonic bite of humor is so powerful that even though she doesn’t do anything objectively sexual, I’ve never been more bowled over by a character’s sexual energy in my little gay life. And I’m not alone — lesbian Twitter is aflutter. The whole timeline is horny for Riley. Plus, Riley had actual chemistry with Abby, and stuff in common! They both attended prestigious universities, they’re both out and comfortable with themselves, and they both wear breathtaking suits. Their chemistry reaches a fever pitch when Riley takes Abby to a gay bar for a drink. They watch a drag performance and Riley helps Abby sing when the queens put her on the spot and embarrass her. My heart basically punched through my ribcage like an iron fist and screamed, “KISS SOFTLY!!!” But then Harper texts Abby, and Abby meets up with her and her high school friends (and ex-boyfriend) at a straight bar — you know, those places where a man who you want to light on fire forces you to take a shot for no reason other than to oppress you — and I cringed. The choice seemed clear to me: A life of drag queens, safe spaces, and sharing booths with Aubrey Plaza, or a lifetime of straight bars, creepy white families, and code-switching with Mackenzie Davis — who is usually very hot but was done dirty with a poorly-fitted wig (sorry!! She was!!!).

Look, overall, I liked the movie a lot. I love a queering of a hetero form. But in this case, I don’t think the form in question was truly queered. Them called it a “trite coming out story.” BuzzFeed said it was a “quest for assimilation into straight families.” If only Happiest Season centered around Riley and her pheromones rather than Harper and her wig, the movie would’ve been a whole lot less of a painful coming out story, and a whole lot more gratifying. I think we need a sequel starring Aubrey Plaza, in all her sexual lesbian power, going home for Hanukkah and just treating a girl so f*cking right, dude. Seriously, I would watch an extremely uneventful 14-hour livestream of Riley and her girlfriend just eating snacks and talking. It’d be so much sexier and more satisfying than Abby and Harper getting en — sorry I just gagged. Abby and Harper getting en — haaaaugh — Abby and Harper getting engaged.

In an interview, Plaza said of her role, “I hope that people walk away from the movie and they’re disappointed that Kristen Stewart didn’t end up with my character, and they like, riot in the streets about it.” All I’m saying is this: We, The Alliance of Queer Women Against Toxic Lesbianism, need to do the absolute bare minimum to honor Riley and literally riot in the streets. Riley Hive: We ride at dawn. Take all the feelings of injustice you’ve been holding in your belly since streaming Happiest Season and show Ms. Plaza how much you care… by donating to a GoFundMe and financing my 600-page fanfic manifesto. I’ve finally found my hill to die on, and it’s Aubrey Plaza in a booth at a gay bar.

More like this
Pamela Anderson’s Dating & Marriage History Could Be Its Own TV Series
By Jake Viswanath
Pamela Anderson's Sons Brandon & Dylan Have Their Own Hollywood Careers
By Arya Roshanian
Wait, Is Barney Stinson Related To Sophie On 'HIMYF'?
By Gretchen Smail
Here’s Everything Coming To & Leaving Netflix In February
By Jake Viswanath
Get Even More From Bustle — Sign Up For The Newsletter
From hair trends to relationship advice, our daily newsletter has everything you need to sound like a person who’s on TikTok, even if you aren’t.