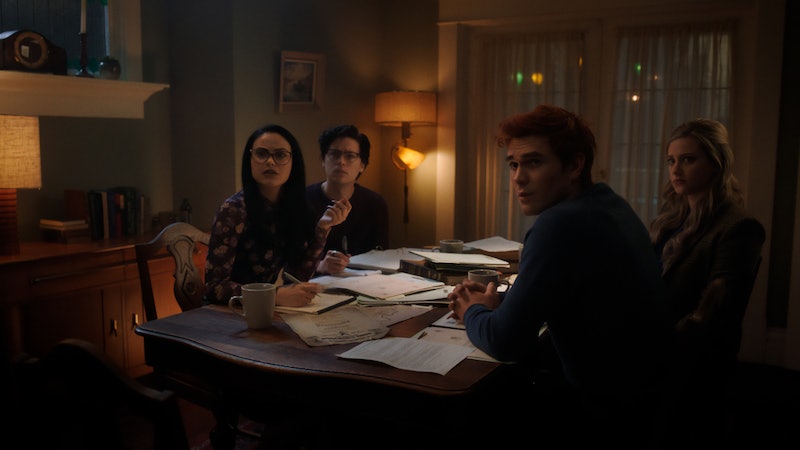 Riverdale Season 5 will come to a close on Oct. 6, but fans won’t have to wait long to be reunited with Archie and the gang — only one month, to be exact. After securing a renewal in January alongside several other CW tentpole shows, the teen drama is set to return in November. Here’s everything we know so far.

Riverdale Season 6 will debut on Nov. 16, switching from Wednesday nights to Tuesday nights. The CW has yet to announce how many episodes the season will feature, but Riverdale tends to run long, banking between 19 and 22 episodes per season. Once Season 6 kicks off in November, it will be on air for around five weeks before going on hiatus for the holidays and returning sometime in 2022.

After Season 5’s time jump, Riverdale kept mostly to its usual stuff — serial killers, cults, and aliens. Between Betty coping with the loss of her sister, Cheryl trying to control the ministry around her dead brother’s spirit, and Archie trying to restore Riverdale to its wholesome glory, suffice it to say there’s a lot of places Season 6 could pick up after Wednesday’s finale.

Executive producer Roberto Aguirre-Sacasa hasn’t shared many details about what’s to come in Season 6, but he told Decider that they hope to carry through many of the emotional beats they laid the groundwork for in Season 5. “A lot of the friendships and relationships and redefinition of relationships that we get to at the end of Season 5 [will] continue into Season 6,” he said.

Given that this is Riverdale, one can also expect that there will be a new mystery to solve. Aguirre-Sacasa hasn’t said what that will be, but he promoted the Season 6 promo image by stating: “Forces are gathering for the ultimate battle between Good and Evil as the cameras begin to roll on #Riverdale Season Six. But who will stand on which side? And who will live, and who will die? Everything has been a prelude to this.”

Exactly what all that means — well, that’s up to your own interpretation. But there’s definitely an engagement ring and a pregnant person at the end there. Aguirre-Sacasa told TVLine that Season 6 will introduce fresh relationships, and even said that the Riverdale writers don’t consider Betty and Archie’s story over. “You will see new couplings that probably you’ll have seen coming a mile away,” he said. “And then I think you’ll see some new couples that are a bit more unexpected.”

An official cast list has not yet been released, but expect most of your Riverdale favorites to return for the new season. That will of course include the core four: KJ Apa (Archie), Lili Reinhart (Betty), Camila Mendes (Veronica), and Cole Sprouse (Jughead).

More like this
The 'Freeridge' Cast Shared Their Hopes For A Potential Season 2
By Grace Wehniainen
'Succession' Season 4 Will Be An "Absolute Banger" According To Cousin Greg
By Bustle Staff
Everything To Know About A Potential 'Lockwood & Co.' Season 2
By Gretchen Smail
Everything To Know About 'The Real Housewives Ultimate Girls Trip' Season 4
By Jake Viswanath
Get Even More From Bustle — Sign Up For The Newsletter
From hair trends to relationship advice, our daily newsletter has everything you need to sound like a person who’s on TikTok, even if you aren’t.