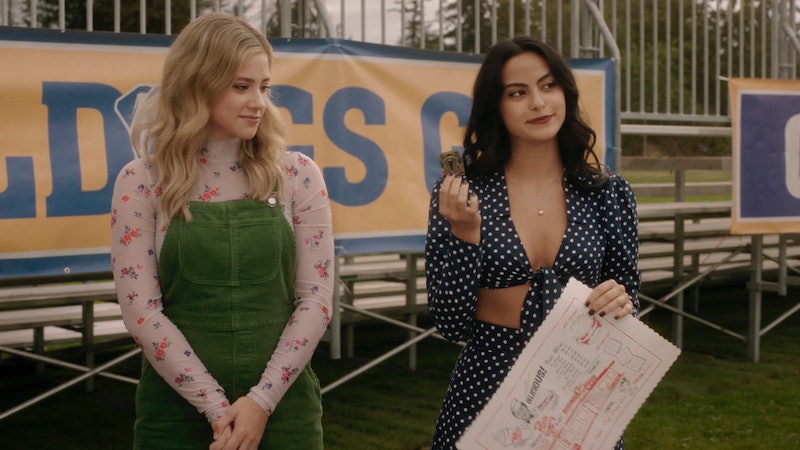 via the CW press site

Spoilers ahead for Riverdale Season 5, Episode 3. Graduation has finally arrived on Riverdale, and like any good send-off, it's accompanied by some laughs, some tears, and a few surprises as we all await the show's long-promised seven-year time jump. So far, the cast has been tight-lipped about what's after high school, but there are a few details we know. Vanessa Morgan's real-life pregnancy has been written into her arc as Toni Topaz (and it looks as if she's now the Vixens’ coach). We'll also see some new faces, including Pop Tate's granddaughter Tabitha, played by Insatiable star Erinn Westbrook. And thanks to a Katy Keene cameo, it's been confirmed that Kevin Keller is a drama teacher at the school.

Here’s everything else we know about what life after high school has in store for the core four:

Archie is Off to the Army

After finding out he'd have to repeat his senior year in order to graduate high school, Archie opts to do pretty much the only thing that could pull him away from the town he (and his dad) loved so much: join the military. We don't know where that experience will bring him over the next seven years, but actor KJ Apa told TV Line that Riverdale is “on the verge of becoming a ghost town, thanks to Hiram” when he finally returns. According to Apa, it's Archie who takes the lead on pulling his friends home to "revive the town again.”

And they may have their work cut out for them. “Without giving away too much, we’re raiding this place, we’ve got lots of guns,” Apa said during an interview on Live with Kelly and Ryan when asked why he was wearing a kevlar vest. Archie appears to be leading the Riverdale Reserve Officer Training Corps in a preview posted by Riverdale creator Roberto Aguirre-Sacasa, so it's possible it's actually just part of the training. But Apa also teased that “Riverdale is getting crazier and crazier.”

Veronica Heads to College … and Down the Aisle

Veronica and Archie were the first couple to break up before graduation. And though their final days together had some ups and downs, they left on a positive note, professing their love and promising to reunite with Betty and Jughead at Pop’s every year on the same day.

But shortly after Archie left town, so did Veronica (to spend time with her mom and Andy Cohen as Hermione prepares to join the Real Housewives of New York — you know, just classic teen summer stuff). And by the time Veronica returns to Riverdale, she’s apparently married. Her husband is Chad Gekko (played by Pretty Little Liars: The Perfectionists star Chris Mason), a “controlling and jealous husband who works on Wall Street.” As one might expect of a character whose name references Wall Street's Gordon Gekko, he won’t play nice — especially not with Archie, given Veronica’s friendship and history with him.

Betty Joins the FBI For Real

After Betty came clean about her and Archie’s kiss, she and Jughead became distant, ultimately deciding to break up and focus on their studies before leaving for college. Betty goes on a road trip to Yale with her mom over the summer, and apparently doesn't return for the gang’s planned reunion a year later. By the time she does come back to Riverdale, she'll be an FBI trainee.

Finally beanie-less, Jughead was the only person to show up to the promised reunion at Pop's, where he reveals in a voiceover that he wouldn’t see anyone in the gang for six more years. “We’d be different people, each of us. Brought together by, of course, a new crisis, new mystery.”

While we don't know exactly what the mystery is that brings them together, it seems Jughead is off to the Iowa Writers’ Workshop to fulfill his dream of becoming a published author. From what Aguirre-Sacasa has teased on Instagram, it’s possible that Jughead joins his friends as a teacher at Riverdale High.

We can be reasonably sure that Jughead won’t be with Betty, at least not to begin with. Along with Veronica’s Chad, there was a casting call for Jessica, a “train-wreck-y hipster” and Jughead’s live-in girlfriend. According to the call sheet, “Jessica makes no secret of the fact that she’s done with their relationship since she can see that she’s not as important to him as the book he’s not writing.”

See where they all end up when Riverdale jumps to the future next week.

More like this
Netflix Bumped Up The 'You' Season 4 Premiere Date — Here's What To Expect
By Bustle Editors
'Bel-Air' Season 2 Finally Has A Release Date & A New Trailer
By Brad Witter, Kadin Burnett and Sam Ramsden
Idris Elba "Breaks Out" Of London In 'Luther' Film First Look
By Sam Ramsden
Everything You Need To Know About Blood & Water S3
By Maxine Harrison
Get Even More From Bustle — Sign Up For The Newsletter