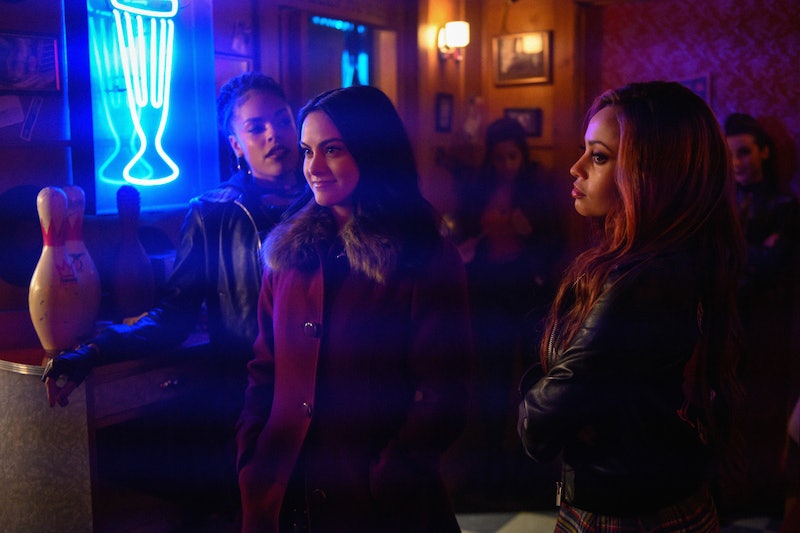 The growth of the Black Lives Matter movement has brought a reckoning on Hollywood, as the entertainment world reconsiders how they've treated Black actors and characters. In a recent interview, Riverdale actor Bernadette Beck criticized the show's treatment of Black characters, saying that she felt like she was being used to "fulfill a diversity quota." The actor follows co-star Vanessa Morgan, who also recently called out the show's portrayal of Black characters on Twitter.

Speaking of her time on Riverdale, Beck told ELLE that her character Peaches 'N Cream — who appeared in Seasons 3 and 4 of the CW hit — was made out to be "unlikable" from the start, and has therefore made her "an unlikable person in people's eyes." According to the actor, producers told Beck that her character was supposed to appear "sassy" and "always speak her mind," but, per the outlet, she's often shown standing in the background, chewing gum and crossing her arms, and given very few lines of dialogue. Beck said that this attitude is never explained, and thus has given both the character — and by extension, herself — a bad reputation without justification. She even claimed she's received death threats and body shaming from the show's young fanbase.

“I get it, there’s always a protagonist and antagonist, but I never had much of a story plot or enough character development to even be considered an antagonist,” she explained. “I was, for no reason, depicted in a very negative, unattractive light. And I’m not the first Black actress to show up on set, stand there, chew gum, and look sassy and mean." Bustle reached out to representatives of Riverdale and The CW for comment.

Beck further explained that her character's arc is reflective of her experience on set, as she recalled feeling ignored by directors. "I was completely forgotten in the scene more than once," she claimed. "The director [would] be walking off set and I'd have to chase them down because I had no idea where to stand, what to do. I just hadn't been given any instruction. You can't treat people like they're invisible and then pat yourself on the back for meeting your diversity quota for the day."

The actor went on, making the point that this kind of sidelining doesn't just affect her work on Riverdale, it could have lasting effects on her career. "If we are depicted as unlikable or our characters are not developed or we're looked at as the enemy all the time, that affects our public persona," she explained. "Our white co-stars are... building up their following, generating more fans, selling out at conventions, and fans have more of an emotional connection with them. What kind of opportunities are we losing out on even after Riverdale?"

It's unclear if Beck is planning on returning to Riverdale for Season 5, which has yet to begin filming. But, if she does, hopefully, it will be to give Peaches 'N Cream a bit more life.

More like this
Netflix Shut Down 'Bridgerton' S3 Rumours About A “Very Dark” Storyline
By Bustle
Everything To Know About 'Only Murders In The Building' Season 3
By Gretchen Smail and Kadin Burnett
Ozzie’s Coming Out Scene With Kitty On 'That ’90s Show' Has Twitter Sobbing
By Brad Witter
Twitter Is Identifying With Sally Field & Jane Fonda’s Friendship In New Viral Video
By Jake Viswanath
Get Even More From Bustle — Sign Up For The Newsletter
From hair trends to relationship advice, our daily newsletter has everything you need to sound like a person who’s on TikTok, even if you aren’t.