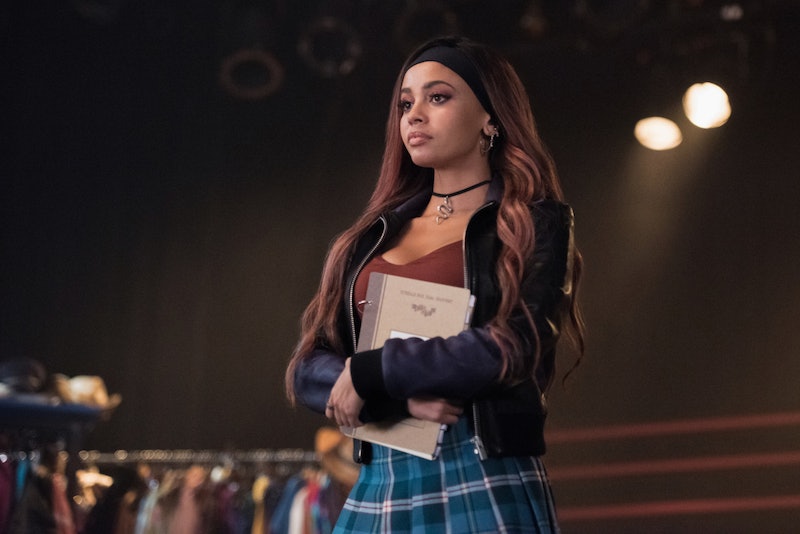 Vanessa Morgan is done being quiet — and she's not letting anyone come for her costars, either. After a Twitter user claimed that Ashleigh Murray was "written off" the show for being a "diva," Vanessa Morgan slammed Riverdale for sidelining its black characters and defended her costar against the allegations. The conversation started after a Twitter user responded to Morgan, claiming that Murray, who played Josie on the show, "is a known diva and didn't want to share the screen with other talented women," and as a result, her character was written off the teen drama. (The post has since been deleted.)

"You don’t know what the f*ck your talking about and don’t talk about my friend like that," Morgan responded. "Another thing I hate BLACK women being called DIVAS for sticking up for themselves." She then seemed to take a dig at the Riverdale writers, adding that "maybe the show should write for [Josie] like the white characters. You picked the wrong day get off my page."

In addition to thanking Morgan for defending her, Murray also retweeted her costar's response, before shutting down the claims herself. "Lol you clearly have me mixed up with someone else," the actor wrote. "I love the Pussycats more than any show ever did. If it were up to me, we'd have our own show."

Murray also refuted the Twitter user's claim that Josie doesn't get much screen time on her new show, the Riverdale spinoff Katy Keene, because of Murray's alleged behavior. "And you obviously don't watch Katy Keene because sis is surrounded by women," Murray wrote.

After defending her friend and costar, Morgan took on the media's portrayal of black people in a follow-up post, where she wrote that she "not being quiet anymore" about their mistreatment. "[I'm] tired of how black people are portrayed in the media, tired of us being portrayed as thugs, dangerous, or angry scary people," Morgan wrote, later adding that "It starts with the media. I'm not being quiet anymore."

Morgan's post appeared to take another shot at Riverdale and the way that she and her character, Toni Topaz, have been treated over the past four seasons. "[I'm] tired of us also being used as side kick non-dimensional characters to our white leads," she wrote. "Or only being used in the ads for diversity but not actually in the show."

Despite being a series regular on the show, Morgan gets much less screen time than her fellow regulars. In addition, Toni's storylines often revolve around her relationship with Cheryl Blossom (Madeline Petsch), and after four seasons, fans still know very little about the character and her backstory.

In October 2019, the show's creator, Roberto Aguirre-Sacasa told Decider that the show would "definitely" share more about Toni's backstory — but only after a series of episodes centered on Cheryl. "The first chunk of episodes, it really is Cheryl, her feet are kind of in the fire, though we do learn some stuff about Toni. We will, absolutely," he said at the time.

Fans will have to wait until Riverdale returns, sometime in 2021, to see whether or not Toni will finally get more screen time.

More like this
Twitter Is Identifying With Sally Field & Jane Fonda’s Friendship In New Viral Video
By Jake Viswanath
Netflix Shut Down 'Bridgerton' S3 Rumours About A “Very Dark” Storyline
By Bustle
Everything To Know About 'Only Murders In The Building' Season 3
By Gretchen Smail and Kadin Burnett
Linda Ronstadt’s “Long Long Time” Plays A Pivotal Role In The Last Of Us
By Brad Witter
Get Even More From Bustle — Sign Up For The Newsletter
From hair trends to relationship advice, our daily newsletter has everything you need to sound like a person who’s on TikTok, even if you aren’t.