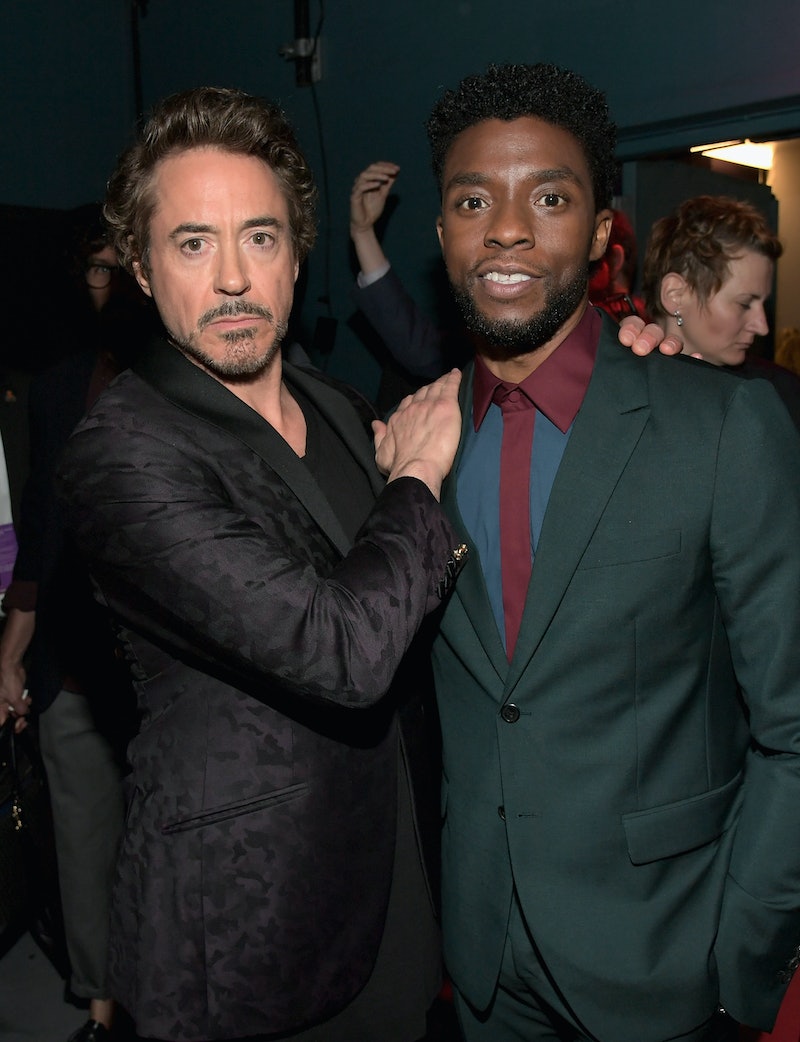 Only a few days after the star's passing, Robert Downey Jr. paid tribute to Chadick Boseman in A Tribute For A King, a moving ABC special that aired on Sunday, Aug. 30, following a special presentation of Black Panther. Boseman, who starred as T'Challa in Black Panther, passed away on Saturday after a private, years-long battle with colon cancer. The actor, whose films also included 42, Da 5 Bloods, and Marshall, was revered by fans and fellow stars alike, and an outpouring of tributes and eulogies for the star has continued over the past several days.

Downey Jr. starred with Boseman in three films, starting with the late actor's Marvel debut in Captain America: Civil War, and described his late costar and friend as "humble, hardworking, and always having a smile on his face." Sharing memories from the Avengers: Infinity Wars set, he added that Boseman was in a "stratus of his own" as an actor and reflected, "Now looking back, all the more I realize what a graceful and incredible human being he was." Downey Jr. also spoke about the star's legacy, calling Black Panther, "hands down the crowning achievement of the Marvel universe." He noted that the film presented a unique opportunity for filmgoers to "vote with their ticket sales" and "say we require this overdue diversity" in the realm of superhero films.

Many other Marvel stars also shared their memories of Boseman as part of the ABC special, including Don Cheadle, Jeremy Renner, and Forest Whitaker. Scarlett Johansson remembered Boseman as a "deeply kind and gentle person and very present and thoughtful," noting that "those qualities are so present in his work." But it wasn't just the MCU that celebrated Boseman. Oprah, Angelina Jolie, and Whoopi Goldberg also made appearances in the special, with Goldberg noting that his "loss is felt around the world, people in every country." She continued, "He was pretty amazing. He is Wakanda forever."

The Dolittle star's appearance during the ABC tribute was not his first tribute to Boseman. Earlier on Sunday, Downey Jr. also posted a sweet video with Boseman on Instagram, showing the two sharing a laugh together during a press tour. In his caption, he wrote that the Black Panther star "leveled the playing field while fighting for his life," noting, "that's heroism." He added, "I'll remember the good times, the laughter, and the way he changed the game."

Many more of Boseman's Marvel co-stars took to social media to share memories of the actor over the weekend. On Saturday, Mark Ruffalo posted a photo of Boseman on Instagram, writing, "What a man, and what an immense talent." He called his co-star "one of the all-time greats" whose "greatness was only beginning." Chris Evans also posted a photo with Boseman from a Marvel event on Instagram, saying the actor was "a deeply committed and constantly curious artist," saying he was "endlessly grateful" for their friendship.

In the midst of ABC's Tribute for a King, Marvel Studios also released a video celebrating the actor and how he brought the iconic Black Panther to life. The video was comprised of behind-the-scenes footage and old interviews of the Black Panther cast, ending with a touching message from Boseman himself. "It's fun to watch just what it means to people," he said of the film. "At times, in my head, I'll be like, 'Well, what does this do for the world? Like, actually, is it actually valuable in this climate?' And I have to say, yes, it actually is. Not because it makes people escape. I think when done right, it gives people hope. I've found that it means a lot."

More like this
The New Bachelor Will Be Announced Next Week & Here Are The Top Contenders
By Grace Wehniainen
Nicola Coughlan Shared A Lady Whistledown Excerpt From ‘Bridgerton’ Season 3
By Grace Wehniainen, Alyssa Lapid and Sam Ramsden
‘RHOSLC’ Star Jen Shah’s Arrest & Legal Drama, Explained
By Brad Witter and Jake Viswanath
A New 'And Just Like That' Table Read Pic Confirms A Key Character's Return
By Jack Irvin and Grace Wehniainen
Get Even More From Bustle — Sign Up For The Newsletter