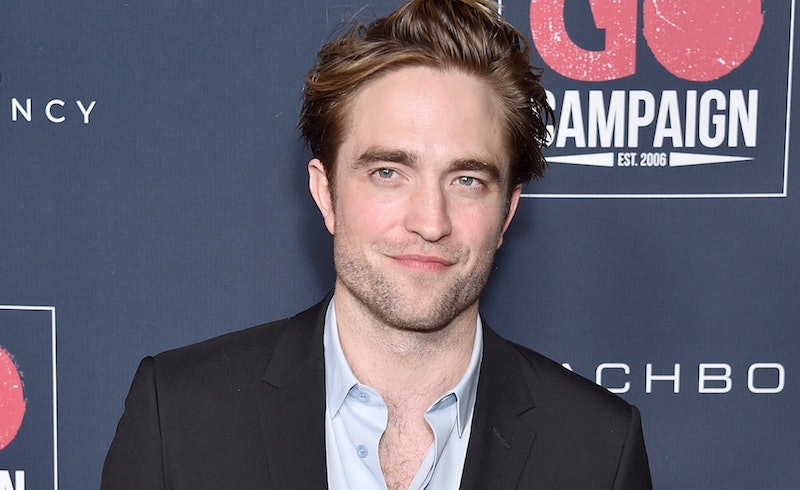 Once a handsome vampire, always a handsome vampire — even if he's no longer sucking people's blood. During Haim's Oct. 22 performance of "3 AM" on Late Night with Seth Meyers, Robert Pattinson took on the role of "emotional vampire" once again. The band — dressed as undead brides for the spooky performance — had the Twilight star make a brief cameo via an iPhone video to act out the speech at the beginning of the song.

"Hey, uh, what's up?" Pattinson says after one of the Haim sisters sends his call straight to voicemail. "Just calling to see if you're still up, but straight to voicemail. Uh, yeah, no biggie. Um, if you're up or whatever, just hit me up." While fans of both Haim and Twilight were delighted by Pattinson's performance as a post-Edward Cullen vampire, Este and Alana Haim actually cast the actor for a very different reason.

"We needed someone to do this cameo that had game," Este told host Seth Meyers ahead of the performance, explaining that the "voicemail" at the start of the song was "essentially a booty call." Este also added that Pattinson wasn't the only actor the sisters considered: "Tom Hardy, we didn't hear back, Benedict Cumberbatch, we didn't hear back. I should also say, we wanted it to be someone British, because we wanted it to be similar to the one on the record [Women in Music Pt. III]." Ultimately, they decided on Pattinson because, as Alana had mentioned, "he has so much game."

Though he famously made fun of the franchise and the character of Edward Cullen during the height of the Twilight hysteria, Pattinson now has fond feelings about the vampire that helped launch him to fame. "It's lovely now that the mania is not so intense," the actor told Good Morning America in April 2019. "People come up [to me] and just have very fond memories of it. It's a really sweet thing."

"I think the only scary part was right in the thick of it all, when it was very, very intense," he continued. "Now the intensity has died down and it's just very warm memories." Pattinson even revealed that he caught part of New Moon on TV, and thought that "it genuinely does have an incredibly good soundtrack."

Now, more than a decade after the original Twilight craze, the actor is happy that new generations of fans are getting into the films for the first time. "It's a fascinating second wave of people appreciating it, which is kind of cool," Pattinson told GMA. "I think when anything becomes a massive phenomenon, there's always people who get annoyed because it's just everywhere. But now it seems like a retro thing: the soundtrack, the fashion. It's like, 'Oh, that's so late 2000s.'"

Now that his perspective on the series has shifted, Pattinson admitted that he would even be interested in doing some kind of Twilight reboot. "I mean, I'm always kind of curious," he told Yahoo. "Anything where there's a mass audience — or seemingly an audience for it — I always like the idea of subverting people's expectations." In the meantime, fans can count on his emotional vampire character to be just one late-night phone call away.