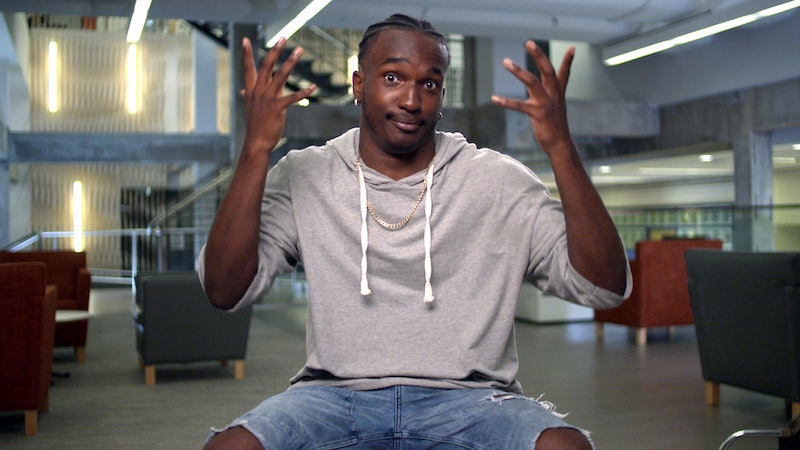 One of seven new Netflix series to honor the 30th anniversary of the Americans with Disabilities Act, Deaf U explores the lives of a tight-knit group of students at Gallaudet University, a private college for the deaf and hard-of-hearing. One of those students is football player Rodney Burford, a self-proclaimed "bad boy."

In the series trailer, Rodney is shown working out alongside co-star and friend Dalton. "People think I'm a f*ckboy," he says. Dalton laughs, and replies in sign language: "If you talk and act like one, you probably are one!" In another trailer clip, Rodney says and signs, "I don't give a f*ck what other people say."

According to Gallaudet Athletics, Rodney is a linebacker on the university's football team and a psychology major. He's from Brooklyn, New York, and went to high school at Maryland School for the Deaf. His Instagram is currently set to private, but his bio reads: "They call me Boobie ... Brooklyn bred Isaiah 54:17."

At a Television Critics Association press tour event in August, Rodney shared why he wanted to be a part of Deaf U. “I wanted to show everyone how deaf people ‘function,’” he said, per IndieWire. "One thing I think people will learn is that deaf people can do what you all do. The only thing we can’t do is hear, and that’s all. We do have our own college; we do have our own culture… the culture is so rich."

To learn more about it, stream Deaf U, out Oct. 9.

More like this
‘The Ultimatum: Queer Love’ Is Officially On The Way
By Radhika Menon and Kadin Burnett
Here’s When You Can Expect More ‘Indian Matchmaking’
By Brad Witter
Here's How To Apply For 'Love Is Blind,' No Matter Where You Live In The US
By Grace Wehniainen
More ‘Love On The Spectrum US’ Is Officially Coming To Netflix
By Gretchen Smail
Get Even More From Bustle — Sign Up For The Newsletter